January 3 2018
25
About 160 people suffered the other day in the capital of Argentina, Buenos Aires, as a result of the police dispersing a mass protest directed against cuts in pensions to residents of the country. The security forces shot the demonstrators with rubber bullets, used tear gas and water cannons against them. In turn, protesters tried to build barricades and throw stones at law enforcement officers. 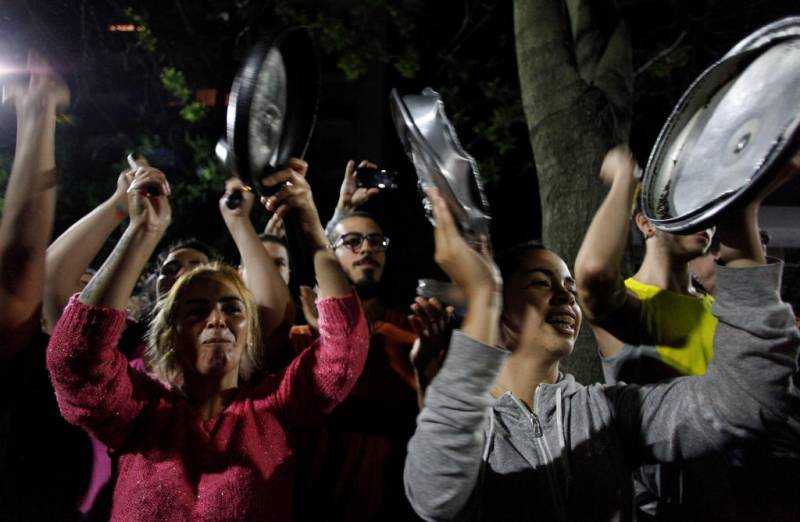 Argentine resentment caused pension reform, launched by the current president, Mauricio Macri. The government controlled by him decided to save budget funds at the expense of pensioners. Pensions will be recalculated and reduced, according to expert estimates, by 30%. Today, older Argentines on average receive about 7 thousand pesos (about 350 dollars) on a well-deserved vacation (taking into account the high cost of local life (prices in Argentina are among the highest in South America) - and so not very much. After the “reform”, pensions can, accordingly, drop dollars to 250. This will nominally correspond, for example, to the average Russian pension, but at the same time it will be significantly inferior to it in purchasing power. So, judging by the information from social networks, a kilogram of ordinary beef in Argentina costs about 10 dollars, and a month of renting an apartment varies from 400 to 900 dollars.


However, despite the indignation of people, the "reform" was still pushed through. Now many will be left with almost a third of their monthly income.

The next steps Makri, according to media reports, should be the abolition of the 8-hour working day (it is allowed to extend it to 10 hours) and the introduction of new forms of employment contracts that reduce the rights of employees.

In Argentina, public sector cuts have already taken place, utility rates and transport fares have been raised at times. But this did not solve the problems. Not only has the economy fallen, so the West-oriented neoliberal Mauricio Macri will have to repay his debts, which the past, center-left government has refused. And most of all, ordinary people are outraged by the fact that the current authorities solve all problems not at the expense of large and medium-sized businesses, but by getting into the pockets of ordinary people. The tax reform promoted today in Argentina, according to media reports, suggests reducing the number of taxes for large businesses, reducing their level and introducing tax holidays.

However, for Mauricio Macri, the heir to the business empire of his father-magnate, a native of the Italian family who actively supported Benito Mussolini, “ordinary people” are an alien element. And forcing pensioners to fold for the sake of bankers and casino owners, all was well, a step quite natural for him.

The question is about what half of the Argentine population thought about when voting for the 2015 of the year was not for those who had worked for years to improve the well-being of the people, but for pro-Western populists who didn’t even hide their plans?

Against the background of “achievements”, Mauricio Macri, Argentina’s ex-president Cristina Fernandez de Kirchner, despite the black PR campaign against her and her children (the Kirchner family was accused of corruption and money laundering at the start of the year, and then and become a senator, returning to big politics.

By a “strange” coincidence, immediately after the new political successes of the ex-president, even more serious accusations were made against her than before.

She, in particular, was officially accused of treason. According to Argentine security officials, Kirchner allegedly helped to hide information about the details of the explosion at the Jewish cultural center in Buenos Aires in 1994. They say, in exchange for the fact that the authorities did not conduct an investigation that could indicate the involvement of Iranian representatives in the blast, Tehran agreed to conclude a trade agreement with Argentina advantageous for Buenos Aires. On the basis of such extraordinary charges, the court decided to arrest three supporters of Kirchner (including the former foreign minister), and demanded that the Senate lift immunity for subsequent arrest - and from the ex-president herself.

Moreover, the Argentine federal court unexpectedly decided that the prosecutor Alberto Nisman, who was previously considered to have committed suicide in January 2015, could not shoot himself in the head. Nisman, according to supporters of the current Argentine authorities, died shortly after he came out against Kirchner. True, no connection was found between the ex-president and the death of the prosecutor. The only person who was able to blame the Argentine authorities for the death of Nisman - is his employee, who handed him a gun for self-defense. Nevertheless, the context in which the case of the death of Nisman surfaced, by itself, throws the day at Kirchner.

According to the mysterious "coincidence of circumstances", the investigation was sharply intensified both in the "Iranian" case and in the case of the death of the prosecutor against the background of the growing popularity of the ex-president and her election to the Senate. And there is practically no doubt that even if the existing criminal cases against Kirchner fall apart, the new ones will not take long to wait.

Tellingly, pro-Western forces came to power in Argentina not as a result of a military coup, the Orange Revolution or the Maidan, but by the results of democratic elections.

In the media and social networks, you can find statements that Kirchner "tired", "become boring". Makri was called “a good guy,” and they believed in his slogans like “We can live better!” And they believed until recently - after all, in October, the pro-government forces performed quite well at the parliamentary elections. Many people saw only when Makri's hand was literally in their pockets ...

There is nothing new under the sun. We can observe something similar not only in Latin America or in the former Soviet republics, but even in Europe. In the same way, the French were still quite recently fascinated by the “good guy” Macron, and only a few months after he was elected to the presidency, they took to street protests against his social policy. It would seem that the whole world had stumbled so many times on neoliberals that this lesson could already be well learned, but before the next elections or “color revolutions”, pro-Western media with thousands of bots in social networks are included, and entire countries, as if falling into a trance, in a daze, follow the liberal prophets to come to their senses only after a painful encounter with reality.

... In the summer of the outgoing year, a photo on which a little girl from the Indian people of Guaraní on all fours drinks water from a muddy puddle in the heat gained viral popularity on the Internet. It happens in the Argentine city of Posadas, on the border with Paraguay. In the provinces, the Argentine Indians have no work, and poverty drives them to cities where parents drive for pennies, and young children are forced to beg and drink water from puddles. The photos were watched by millions of people, many of whom sympathized with the child, absolutely not thinking about what brought him to such a life. And the answer to this question is obvious. Simply, tax holidays for casinos and payment of debts on IMF loans are much more important than a bottle of water for a baby-guarani.

Ctrl Enter
Noticed oshЫbku Highlight text and press. Ctrl + Enter
We are
CIA attacks in Argentina. Who will be the new victim?What we lost
25 comments
Information
Dear reader, to leave comments on the publication, you must to register.