December 29 2017
34
On Monday, the Ukrainian Internet publication Obozrevatel, under the heading “Ukraine is moving further away from Russia,” published a note by one of its bloggers. "Observer" positions itself as the largest in one news online edition and as a leader in the ranking of daily attendance among online media in Ukraine. It is curious that almost 60 percent of visitors to the Observer are young people from 15 to 34 years old. Most of them are male users. 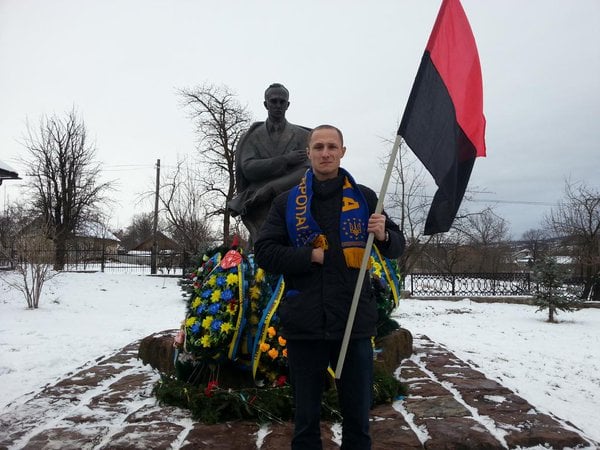 Here, this fertile audience (potential participants in the so-called anti-terrorist operation in the Donbass), the Observer edition, presented an enthusiastic article by its blogger Yuri Shulipa about the first official celebration of the Catholic Christmas in Ukraine.

Shulipa is not a simple blogger, but a bit of a status blogger. He calls himself the director of the Institute for the Study of Russian Aggression. Already from this highly scientific name it is clear that Shulipa should not so much praise the holiday of Western Christians (widely celebrated, by the way, by Catholics in Russia), but rather share with the young audience of the Internet publication his “conclusions and discoveries”.

In a short note, the opening is really there. “Ukraine,” writes a blogger who has not mastered the history of Orthodoxy, “is rapidly freeing himself from spiritual occupation in the form of Russian Orthodoxy, which has been imposed on her for more than three hundred years of Moscow-Russian oppression. This is the restoration of historical justice and catholicity of Ukraine. Obviously, the 25 day of December 2017 of the year became for Ukraine a certain point of bifurcation, at which a turn towards Russian Orthodoxy is never impossible. The Russian spiritual occupation of Ukraine is over. ”

The Observer Edition has accompanied the pseudoscientific post of an illiterate blogger with a shy link: “The website’s editorial staff is not responsible for the content of blogs. Editorial opinion may differ from the author. " However, they concealed their opinion, different from the “author’s,” from the young Ukrainians.

Meanwhile, any self-respecting publication in such a situation should have been worried not only about the observance of the right to “freedom of speech”, but also to protect the historical truth. Togo requires elementary respect for site visitors. The audience, as we see, is young here, from the DPA generation (the state final certification of schoolchildren in Ukraine is an analogue of the Russian EGE). There is a high probability that these people will take Shulipa's nonsense, as they say, at face value.

The “observer” could intelligibly explain to young Ukrainians that Orthodoxy came to Kiev much earlier than the time indicated in the note. It happened more than a thousand years ago. Enlightened Ukraine knows about the baptism of Russia in 988 by Prince Vladimir. Moreover, every time she arranges noise and shout (such is the specificity of the moment) when she hears that the Russians, who rightly consider Vladimir and their saints, also render respect to the Grand Duke.

Instead, the publication with its inadequate blogger is happy that President of Ukraine Petro Poroshenko officially announced: “Now he will celebrate Christmas twice, first in our Ukrainian style 25 December, and then in Russian - 7 January. The latter, the publication specifies to its young readers, is more formal and for political purposes. The proclamation of December 25 as the official date in Ukraine of the celebration of the Nativity of God testifies to the important spiritual victory of Ukraine over Russia. ”

Why did Filaret get worried ...

Strictly speaking, in this smug conclusion of the “Observer” there is a lot of guile. In fact, we are talking about the publicly declared victory of the Ukrainian Greek Catholics over their Orthodox compatriots. One can argue whether this victory took place. However, it is obvious: the Ukrainian Greek Catholic Church (or the Uniate Church) goes to it all the years of independence of modern Ukraine.

We know the history of this independence. We remember how Orthodox churches and church property were seized in favor of the Uniate Church, as the exarchates of the Greek Catholics went to the lands consecrated with the millennium of the Orthodox faith, and stepped over the eastern bank of the Dnieper, like the Uniate priests with a cross and a word raised their flock on the recent Maidan.

Behind all this, the history of the Uniate Church itself has somehow faded into shadow. Allow yourself a little excursion. This church appeared in a difficult time of the Russian turmoil: in the dramatic years of the struggle of the boyars with the royal power for the preservation of their privileges and political influence. Then the Russian Church also blinked. She had just received autocephaly and the Patriarchate, and Russia became the world's largest Orthodox state.

The distemper in the state brought discord to the environment of church hierarchs who supported the various forces of that confrontation. All these perturbations led to a weakening of Moscow’s influence on the outlying Russian lands. There began centrifugal processes. The first "campaign of Ukrainians in Europe" was led by the landowners of Galicia.

The social leaders of this land sought their happiness among the Polish magnates. They changed their rituals, switched from Orthodoxy to Catholicism, and became polonized. It was the turn to change the faith of ordinary people, but then a big problem arose. The Orthodox did not want to change the rites and resisted fervently.

People were beaten, maimed, killed. In the estates of the lords a gallows became a permanent attribute of the farmstead, but even this did not help. In the end, a church compromise emerged when the believers and the clergy retained the right to the Byzantine rite, while recognizing the supreme authority of the Pope and the binding nature of Catholic dogmas.

Such an unusual symbiosis was concluded by the conditions of the Union (that is, the union), and the church received the name of the Greek Catholic. Later, it will be consolidated in Volyn and Podillia, it will enter into conflict with the Orthodox Church, which has declared the betrayal of Unii of Greek Catholics with Rome, and the Russian authorities to be a betrayal.

Sometimes it took extreme forms. There is a case when Tsar Peter during the vespers in the Polotsk Basilian monastery personally hacked four Greek Catholic monks, and the next day ordered the hegumen and his assistant to hang. Since then, there has been no peace between Orthodox and Uniates.

On the contrary, both world wars of the last century became a time of bitter struggle between Ukrainian Greek Catholics and Russian Orthodox. They lost in these wars and partly sheltered from the troubles overseas - in America and Canada. However, their grievances are not forgotten. The time of the present Ukrainian independence has become the time of the historical revenge of the Greek Catholics.

Over the ocean, they gained strength in government and business, and now all of their capabilities have been sent to support co-religionists in their historic homeland. This helped numerous immigrants from Galicia and Volyn to straddle power in Kiev, crush the culture, the media and public organizations.

Now the turn has come to Orthodoxy, for nearly two millennia, presenting itself to the Christian world, as "the confession of the true apostolic faith, enshrined in sacred scripture and sacred tradition." There is a great danger that Orthodoxy in Ukraine will lose this war to the Greek Catholics. As the Orthodox Galicians lost their struggle four centuries ago, they were eventually reborn as aggressive opponents of the Russian world.

Probably, the founder of the unrecognized Ukrainian Orthodox Church of the Kyiv Patriarchate, Philaret (Denisenko), sensed this. In November, he sent a letter to Patriarch Kirill of Moscow asking for forgiveness and overcoming the church schism in Ukraine. The Council of Bishops of the Russian Orthodox Church seriously discussed the message of Philaret.

“After the bitter twenty-five years of strife, violence, mutual hostility, resentment and disorder arising in Ukrainian Orthodoxy and Ukrainian society as a result of the split, there is finally an opportunity to embark on the path of restoring unity,” the Council expressed its attitude to the unexpected message from Kiev .

The Council of Bishops established a special commission to negotiate with the Kiev schismatics. He introduced the clergy of the Russian Orthodox Church and the Ukrainian Orthodox Church of the Moscow Patriarchate. The commission was headed by the chairman of the Moscow Patriarchate’s department for external church relations, Metropolitan Hilarion of Volokolamsk.

As soon as the decision of the Moscow hierarchs became known in Kiev, Filaret disavowed his appeal. The press service of the UOC-KP immediately published an explanation that the Kiev patriarch had never recognized and did not recognize the “guilt split” of the church, and therefore did not intend to repent. The appeal of Filaret, in the opinion of the press service, was only the hope that the ROC would recognize the autocephaly of the Ukrainian Orthodox Church.

Experts associate the scandalous pirouette of the UOC with a strong pressure on Filaret of the Kiev authorities and its Western curators, who are clearly not interested in strengthening the position of Orthodoxy on Ukrainian soil. They have completely different plans for Ukraine. This was felt in the online edition of Observer, which turned the bright Christian holiday of Christmas into a means of political struggle.

Orthodox faith is from the word “right” and calls people to peace, unity, harmony and spiritual light. With it today, it is uncomfortable for those who sow hostility in Ukraine and lead a civil war with compatriots. It is unfortunate that they are trying to justify this unjust war in Kiev with the values ​​of the ancient Christian religion ...

Ctrl Enter
Noticed oshЫbku Highlight text and press. Ctrl + Enter
We are
The representative of the "fifth column": to annex Eastern Europe, Putin was prevented by NATO forcesReports from the militia of New Russia for 27-28 September 2014 of the year
Military Reviewin Yandex News
Military Reviewin Google News
34 comments
Information
Dear reader, to leave comments on the publication, you must to register.