December 28 2017
40
The long-awaited exchange of prisoners between the regime of Ukraine and the People's Republics nevertheless took place. It took place in spite of the vile attempts of ukrohunta to thwart it or at least tighten it to the maximum. Unfortunately, without fraud and deception from the Ukrainian side has not done: not all the people who were to gain freedom came out of the dungeons. 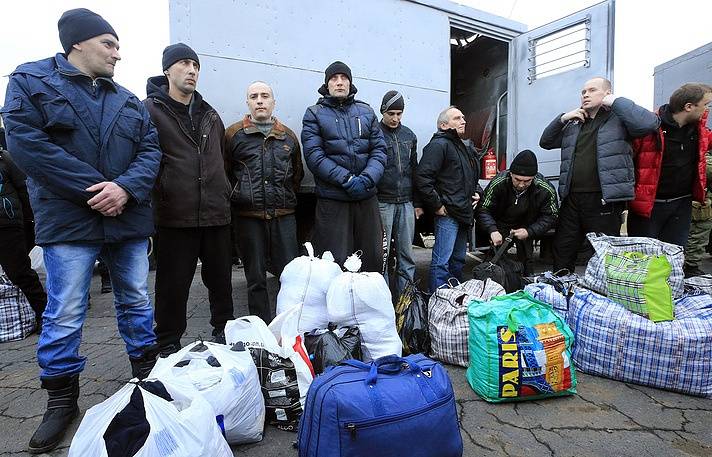 Initially, there were agreements that the exchange procedure will take place on a neutral territory, in the buffer zone. At the last moment, the Ukrainian illegal "authorities" changed the conditions and began to insist that the exchange take place at the Mayorsk checkpoint (near Gorlovka) - that is, in the territory controlled by Ukraine. It was very risky for those representatives of the Republics who will go there - for the Kiev junta, all these people are “terrorists”, “separatists”, etc. As a result, the Republicans were forced to make concessions, otherwise the exchange could break down altogether. I had to rely on the guarantees of representatives of the OSCE and the International Committee of the Red Cross.

As a result of all negotiations and approvals, the exchange began a few hours later than planned and was divided into two phases: first between the LPR and Ukraine (which just happened at the Mayorsk checkpoint), and then between the DPR and Ukraine (this stage took place at territory of the DPR).

But the most unpleasant and most dramatic is not in the difficulties of organizing the exchange, which arose through Ukrainian wine, but in another. The fact that political prisoners were deleted from the lists were already hoping to be released. Of the 306 people that Ukraine was supposed to free, 237 remained in the lists. Allegedly, the 43 man has already been “released from custody” and therefore did not come for an exchange, - at least, Valeria Lutkovska, an authorized representative of the Verkhovna Rada of Ukraine (IUJ) for human rights, claims. Dubious statement, however.

14 citizens of Russia and one Estonian citizen remain behind bars in Ukraine. According to a member of the Contact Group, the deputy speaker of the Verkhovna Rada of Ukraine, Irina Gerashchenko, they voluntarily refused to exchange. But these words are deception.

The head of the Irina Berezhnoy Institute of Legal Policy and Social Protection, Elena Berezhnaya, said that her organization was able to contact some of these prisoners. And they categorically denied their refusal to exchange. Here are the names of some of these people - Evgeny Mefedov, Maxim Slepko, Sergey Egorov, Olga Kovalis, Igor Timanovsky.

Elena Berezhnaya also spoke about personal communication with one of them - a citizen of the Russian Federation Yevgeny Mefyodov, the person involved in the “Odessa case”. He confirmed that he does not refuse the exchange. The lawyer of Mefedov, Valentin Rybin, confirmed this information, also stating that his client was preparing for an exchange, but then Irina Gerashchenko came to take prisoners, and he and other Russian citizens said that they would not be changed.

This person is illegally behind bars - the court decided several times to release him. However, on the one hand, the nationalist radicals put pressure on the judges, on the other - instructions to keep Yevgeny behind bars at any cost came from the “top.” At this time, Eugene has precisely expected to go free. And at the last moment his hopes collapsed. It turns out some andsophisticated moral torture.

The famous Ukrainian lawyer Tatiana Montyan in her blog on Facebook told about the fate of her client, an Estonian citizen Vladimir Polyakov. He also has long been a free man in court, in recent days has been waiting for release. At the last moment, he and the citizens of Russia were taken away from the filtration camp, where the persons who were being prepared for the exchange were kept.

Now these people remain in the Ukrainian torture chambers and it is not yet clear whether they will wait for liberation. True, Ukraine claims that there will be a second stage of the exchange. What is not all Ukrainian prisoners released, and Kiev will insist on their release. Well, after all, the DPR and the LPR have long been proposing the wording “all for all”, and the Ukrainian side has been cheating all the time, delaying the process and arranging other dirty tricks.

Another well-known political prisoner, Daria Mastikasheva, remains behind bars. It was even earlier removed from the lists for exchange. The woman, after being captured during a trip to her relatives, was accused of so-called treason and spent several months in the dungeons of the Poroshenko’s junta, who is in a very depressed state. No wonder - she was not only beaten, but also placed in a mental hospital. She gave her husband, through a lawyer, a note in which she wrote: “If you don’t go out before 31, you can do nothing else, sorry. I'll really snag here».

Other conditions contained Ukrainian prisoners. Ukrosayty talk about one of these "heroes", who arrived at the exchange with a huge bag of books. It turns out that he read a lot in captivity, and even gave them books with him. Well, that says a lot about the difference between being in Ukrainian dungeons and being held captive in the DPR or the LPR ...

There is one more thing. Before the exchange, the head of the DPR, Alexander Zakharchenko, pardoned all the prisoners who were to be released. The Ukrainian side did not do this - many of those who returned to the Republic were left without documents, their legal status in Ukraine was not determined, which means they would again be put on the wanted list as if they were criminals.

Well, Kiev has good teachers. As the events of the last decades show, the West does not know how to pardon its opponents, but it is able to lie too well and turn over any agreement in its favor. Small sharper successfully learns from large sharper.