While she is warm, with her hand
In the dust with your blood I will write:
"Now changeable as the wind, Warwick
It can no longer change "".
William Shakespeare. Henry VI

On March 29, 1461, the main battle of the first stage of the Rose War took place - the Battle of Toolon - the largest in terms of the number of participants. According to various sources, from each side thousands of people fought from 30 to 50. Neither side was in a hurry to start the battle, the time was painfully stretching until noon. The first archers of York opened fire. Bad weather Yorkistas was only on hand. Heavy snowfall and gusty, piercing wind beat in the face of the archers of Lancaster. Snow sculpted in the eyes, visibility was very bad, so the archers could not see the target and their arrows flew past, while the arrows of the enemy hit the target accurately. And yet, despite the loss, Lancasters were able to press the enemy troops on the left flank. 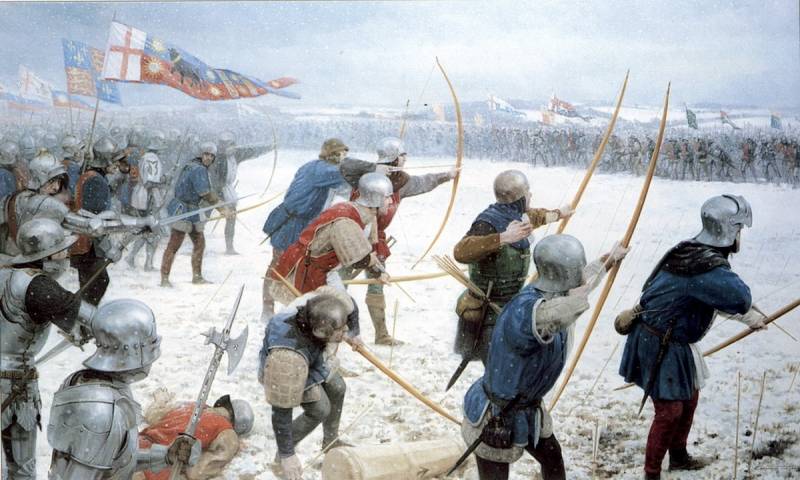 Battle of Toolon. Archers in the snow. Fig. Graham Turner.

The reinforcement given by the Duke of Norfolk, a supporter of York, finally decided the outcome of the battle. His squad defeated the right flank of the Lancasters, after which the army began to flee. The blood-stunned warriors did not take prisoners of war, they caught up with the warriors fleeing from the battlefield and mercilessly killed them. Historians claim that the entire field was littered with corpses, the final loss figure is still unknown (according to one data, this is 12 thousand people from York and 20 thousand from Lancaster, according to others - 8 and 20 thousand, respectively). The battle ended in victory for Edward. 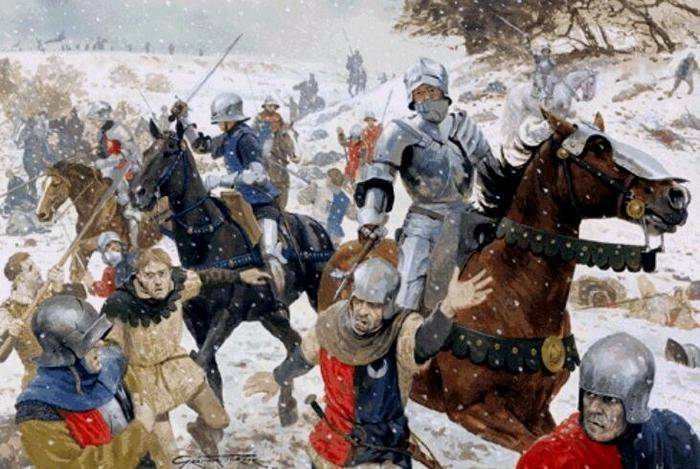 Battle of Toolon. The pursuit of running. Fig. Graham Turner.

Queen Margaret again escaped captivity and went to Scotland. He was followed by the hapless king Henry, who was called “the king without a kingdom” behind his eyes. Their position seemed hopeless. Somerset and Percy decided to surrender. One hope was for Scotland and France - the sworn enemies of England, but His Majesty King Louis XI of France was not in a hurry with active actions. He limited himself to Margarita’s support only in words. Some time later, in the north of England, supporters of Lancaster dragged the frontier Scots to their side and tried to raise a rebellion. They were joined by Somerset and Percy, who set off to join up with the army of Heinrich. 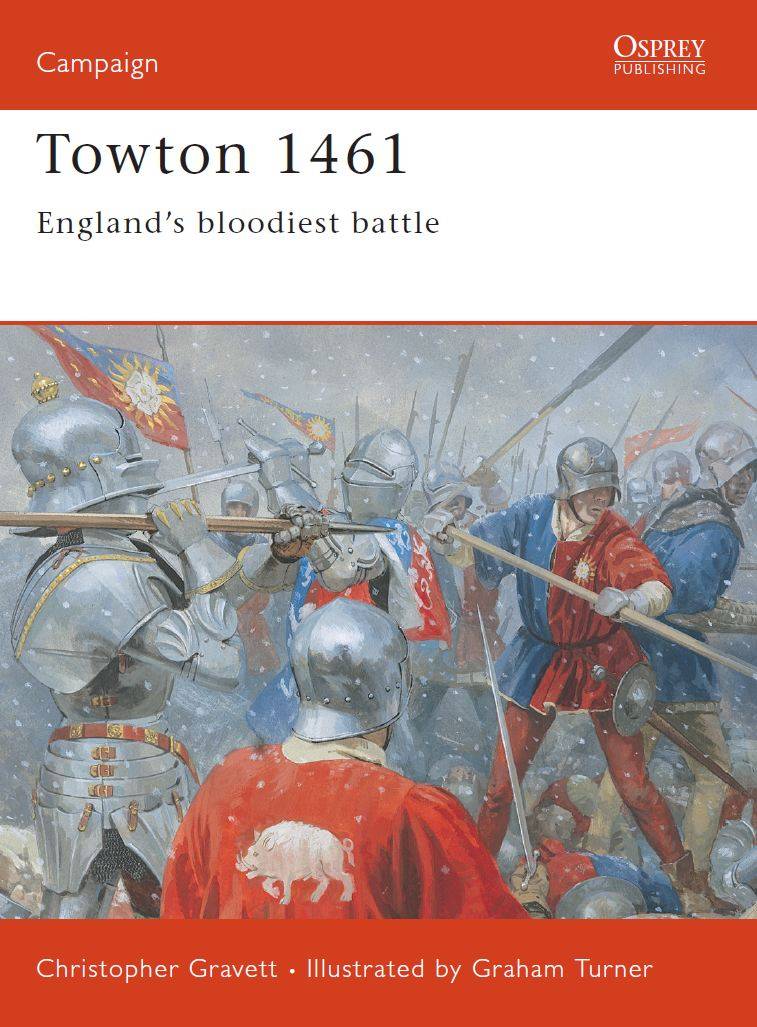 Those who know English can be advised to read about the Battle of Toolon, this book of Osprey Publishers. Posted by Christopher Gravette, artist Graham Turner.


And so, on April 25, 1464, in a fierce battle at Hedgeley-Mure, Lord Montague outright defeated the five thousandth army of the Lancasters, commanded by Sir Ralph Percy. For Percy, this fight was the last. Less than a month later, on May 15 of the same year, Lord Montague near the city of Exgem caught up the second part of the enemy troops and forced them to go down to the river. Sommerset troops were in a very difficult position and could not provide adequate resistance. Montague's army, rapidly rolling down a hill, instantly destroyed the center of its enemy’s troops and, splitting it into two parts, dispersed the troops stationed on the flanks. Heinrich was able to avoid captivity, and he wandered around Balkhashir for some time, in July 1465 was captured in Yorkshire and imprisoned in the Tower. England was in the hands of the Yorks, only in some parts of the country remained discontent, but this did not solve anything at all. 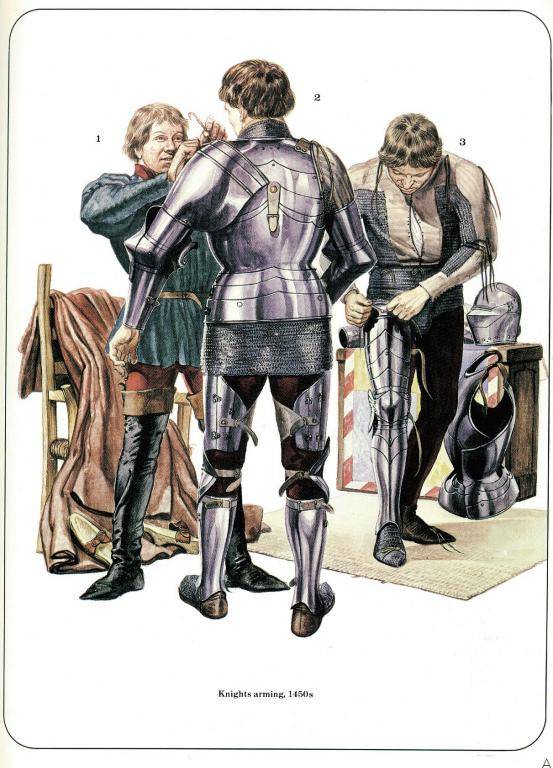 Knights of the era of the War of the Roses wear armor. Please note that the left knight's cuirass consists of two parts each, connected by a belt, both in front and behind. At the knight's right, the chainmail complements all the most vulnerable parts of plate armor. Artist Gerald Embleton.

The small peaceful respite received by the country really turned out to be short. Earl Warwick was going to marry King Edward and daughter of Louis XI, and the matter was already “on the ointment” when it suddenly turned out that Edward had secretly married Elizabeth Woodville, who came from a seedy noble family. In addition to frank misalliance, this marriage alliance was made in addition to Warwick. The count was furious. In addition, Edward, as he could, interfered with the marriage of his daughter and his brother Clarence. The king continued to strengthen ties with the Burgundian court and betrayed his sister Margaret for the Duke of Burgundy Charles the Bold. All this, as well as the growing number of Elizabeth’s relatives at court, their ambitions, as well as the king’s reluctance to reckon with the “Creator of the Kings”, plus the obvious desire to limit his power and influence in various ways — all this led to enmity. 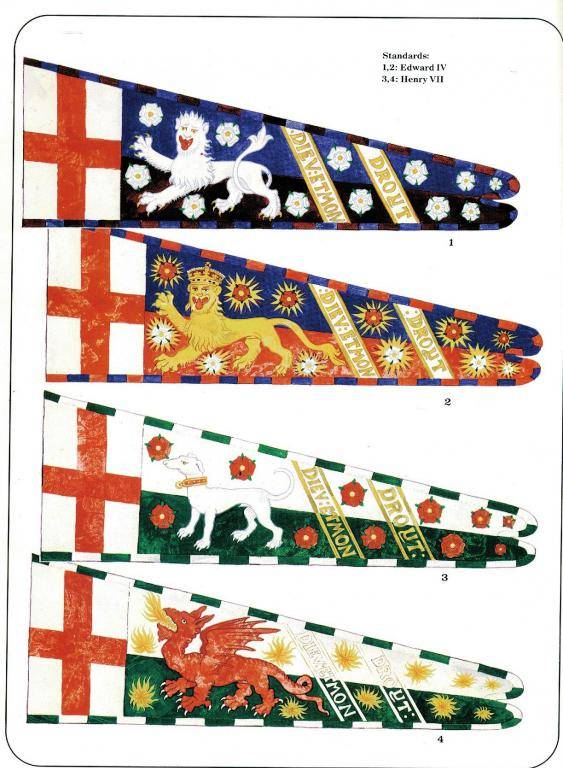 In 1469, a revolt broke out in Yorkshire, which Warwick and his brothers supported with all their might. The rebels were on their way to London, and on July 29 of the year, the battle of Adzkhot broke out. The battle ended with the defeat of the royal troops, Earl Rivers, a supporter of the king, was killed. Edward was captured. There was an interesting situation: in the hands of the winner were the two kings of England - Henry VI, sitting in the Tower, and Edward, located in the castle of Middelheim! Thus, the “King Maker” could become the ruler of England, but he preferred the position of minister and first adviser to the king. Edward was returned to power, once again justifying the nickname of the newly minted minister, however, he immediately forced him and his brother Clarence to flee to France. In France, the fugitives, with the direct participation of King Louis, began negotiations with one of their sworn enemies, Her Majesty Queen Margaret. They were united by hatred of Edward, and therefore very soon an agreement was reached on joint action to return to the throne of Henry VI. 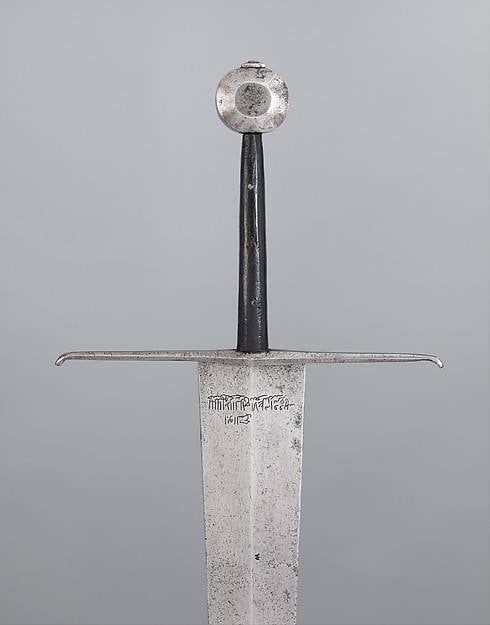 13 September 1470, Sir Warwick and Sir Clarence landed in Devon and rushed to London via Plymouth. Edward, who did not have enough troops, offered absolutely no resistance and hurriedly fled to the Netherlands to his son-in-law Karl. The rebels on October 6 solemnly entered London, Henry VI was released from the Tower and again proclaimed king. 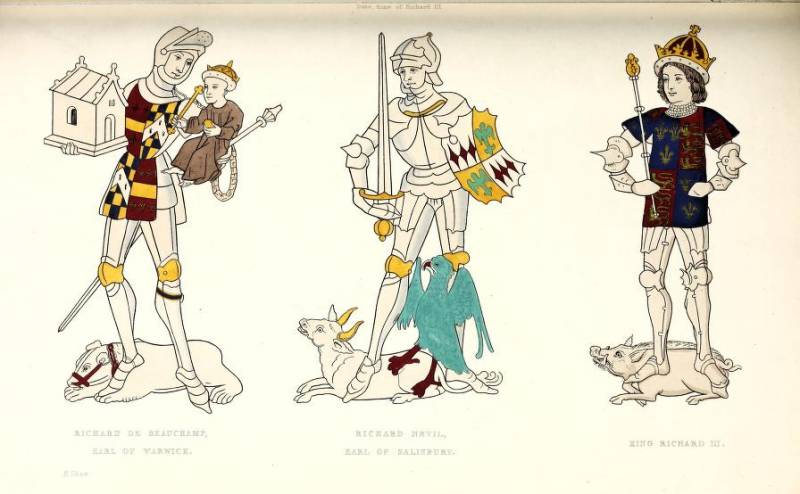 Edward did not want to put up with the loss of the throne, and with the support of Charles the Bold, who tried his best to prevent the joint military actions of England and France against Burgundy, landed on the coast of England with a team of 1,500 German and Flemish mercenaries. Disgruntled noblemen approached the army with their troops and, as the "combined squad" moved inland, it constantly grew with new and new supporters. The army, led by the Duke Clarence, whose task was the immediate and complete destruction of the enemy, suddenly turned to his side. Edward's army safely increased by another 12000 man. After such a frank treachery on the part of Clarence, which also gave a significant superiority in the number of troops, Warwick and Oxford, stationed with their troops near Coventry and waiting for Edward, considered it reasonable not to start any hostilities. And besides, do not obstruct Edward's army on its way to London. The city fell ingloriously, and King Heinrich was once again taken prisoner, this time not for long - in a few weeks he died (according to another version - killed) in the Tower. 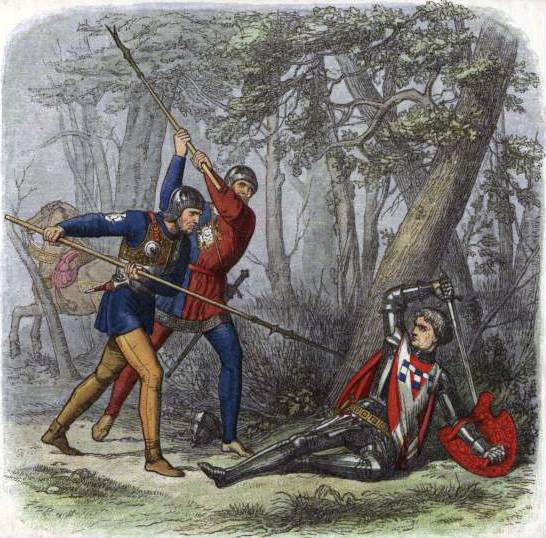 Edward and his brother Richard met a number of Warwick troops in 9000 people near Barnet, where 14 April 1471 and the battle took place. Opponents moved in the early morning, when the fog was still spreading on the ground and did not have time to dissipate under the rays of the morning sun. The battle began with the attack of the right flanks of the opposing sides. The left flank of Edward's army was soon crushed by a detachment of Count Oxford. But then there was a bobble: because of the dense fog, the "fighters" of Oxford in the fever attacked the center of their troops. The attacked soldiers decided that the count had betrayed them, this rumor instantly spread throughout the army, which led to the disruption of the morale of the troops. At that moment, the cavalry reserve of Edward struck the utterly bewildered soldiers. The army of Oxford faltered, and panic and general flight soon began. Warwick, fighting on foot, died. There is another version, according to which, already being seriously wounded, he was simply finished off by marauders after the end of the battle. Pal and his brother Montague. The defeat of the army was complete, but the number of the dead was not great - 1000 is a man on the part of Warwick and less than 500 - by Edward. 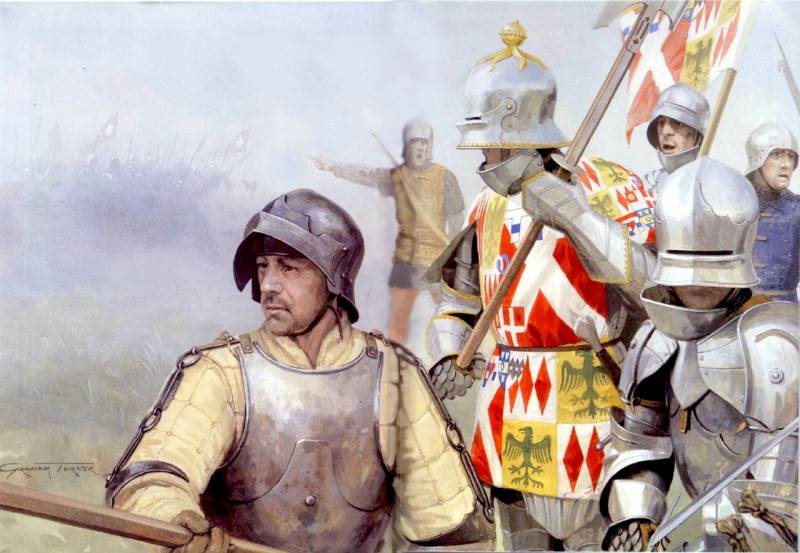 John Neville, 1 of the Marquis of Montague at the Battle of Barnet. Fig. Graham Turner.

The next day, Queen Margaret's army landed in England, where she received news of the defeat of Warwick. Margarita went to join the army of her supporter, Count Pembroke, but was overtaken by Edward's army, and was forced to take the fight near Tewksbury, which took place on 4 in May 1471. Supporters of Lancaster (and there were about 3 000 people) took a very good position. Using the natural terrain, or rather, the stream bed, the right flank secured an obstacle for Edward's army. It currently has approximately 4 500 people. 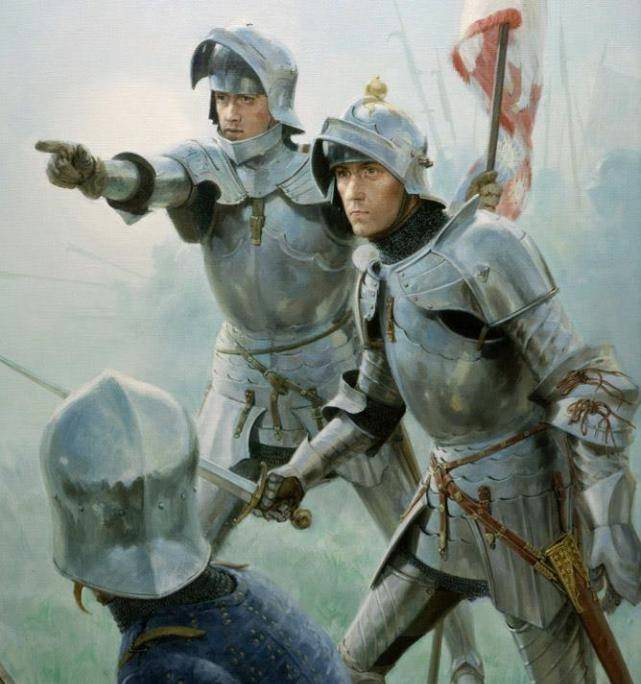 At the beginning of the battle, Sommerset climbed over the stream and went on the attack against Richard Gloucester's squad, intending to crush him with a blow to the flank and smash before help arrived. The task of Wenlock was to attack the center of King Edward. While Sommerset was trying to bypass Richard and go to the rear, he was attacked by a squad of two hundred cavalry soldiers who were left in an ambush just in case of the development of such a variant of events. Wenlock hesitated to attack, and in the end was forced to take up defense ...