How Russia confidently wins sanctions exactly the opposite

December 28 2017
209
If we believe our mass media, in which lately high state officials have acted in unison, assuring each other that we do not care for sanctions, import substitution is in full development, and everything else. 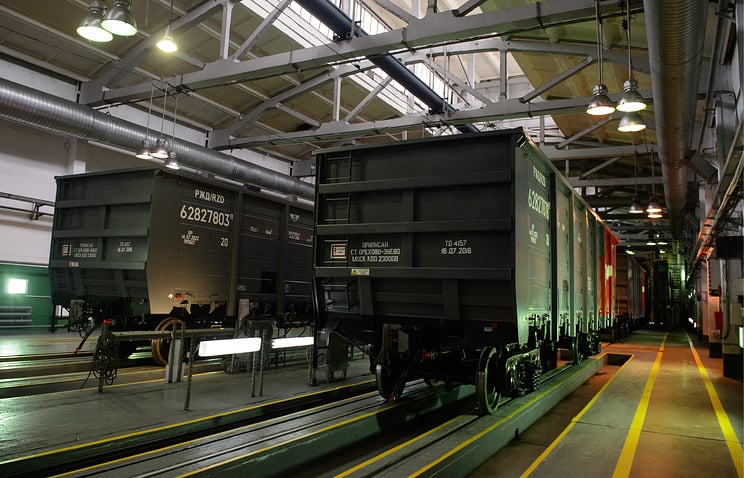 The crisis is over, we will win. Final and unconditional.

I would like to believe in these words. And even better - feel it the hard way.

But in practice, sometimes things happen that cause complete bewilderment and even unwillingness to understand the situation.

The CEO of the First Freight Company, the Russian railway operator Oleg Bukin, told reporters that in 2018, Freight One planned to purchase up to 5 thousands of new railway cars, but this could not be done.

The reason gives insanity: the main supplier of Freight One in terms of cars, Uralvagonzavod (yes, it also produces cars), is under US sanctions!

The question arises: what relation does Trump's decree from 2 of August this year have to the supply of cars from a Russian manufacturer to a Russian freight operator?

If you look closely, interesting nuances come up.

Freight One, Russia's largest private rail transport operator, is a repurchased unit of the Ministry of Railways. The owner is oligarch-3 of Russia, Vladimir Lisin (Novolipetsk Metallurgical Plant, Nevsky Shipyard, St. Petersburg Sea Port, and so on).

The company is registered in Moscow. In the manual - only Russian surnames.

But Freight One is part of the UCL Holding international transport group. The UCL website, also owned by Lisin, reports that the UCL group consists of Freight One JSC and the Gryazi car-repair depot.

It would seem, what have Trump and his decree? And how can an American president tell Russian companies in general where, what and from whom to buy?

As it turns out, it can. Moreover, the Russian company seems to obediently follow the instructions from the United States. Voluntarily executing a team.

Perhaps the whole point is that the Russian company and the Russian holding are no longer as such. On the sites everything is in order: Russian addresses, phone numbers, registration numbers. But Forbes, while posting information about UCL, for some reason, indicates the city of Amsterdam as a “port of residence”. And this is no longer Russia. This is the Netherlands.

Actually, this tale that sanctions do not harm us, but on the contrary, strengthens the country, ends.

In fact, the companies that have become private and international, owned by oligarchs, do not simply depend on how they are commanded in the United States, they will still unquestionably execute commands from overseas.

Otherwise, real sanctions and real financial losses. The threat to business, the threat to the personal empire of Chevalier of the Order of Honor and Alexander Nevsky Vladimir Lisin.

And Uralvagonzavod remains without an order for 2018 year. Perhaps, the problem will be solved by the car-building plant in Torzhok, which did not fall under sanctions. Or, even simpler, the cars will be ordered somewhere else abroad.

All these rhetoric on the topic that import substitution solves the problem of sanctions, turn into dust and empty sound when it comes to private interests.

And here everything will be as ordered by the true masters of the situation. This, of course, is not about the representatives of the Russian authorities. We are talking about the so-called elites, long ago tied in the West.

Sad of course. The fact that the UVZ does not receive a very good order is half the trouble. The second half is that, in fact, Russian companies do not belong to Russia. They belong to world capital, which does not have citizenship and nationality.

Hence, not just attempts to influence (as happened at the Voronezh Verofarm enterprise owned by Americans who tried to dictate sanctions conditions to employees), but to dictate their conditions.

As dictated by the conditions of the winners loser.

And the most embarrassing moment: our oligarchs are going to fulfill these conditions.

Of course, there is no point in appealing to the patriotism of the same Lisin. When a person has 3 capital in Russia and 57 in the world (according to the same Forbes for 2017 year), this is not quite a citizen of Russia, no matter how hung him with orders. This is a citizen of his capital, the emperor of his empire.

Something tells me that our elite emperors have recognized themselves as defeated before the West. So, backstab can be expected at any time. Everyone, from Putin to the janitor.

Ctrl Enter
Noticed oshЫbku Highlight text and press. Ctrl + Enter
We are
Reports from the militia of New Russia for 27-28 September 2014 of the yearResults of the week. "Well, do not change me because of every idiot!"
Military Reviewin Yandex News
Military Reviewin Google News
209 comments
Information
Dear reader, to leave comments on the publication, you must to register.