"And there was a great battle and a sore evil ..." 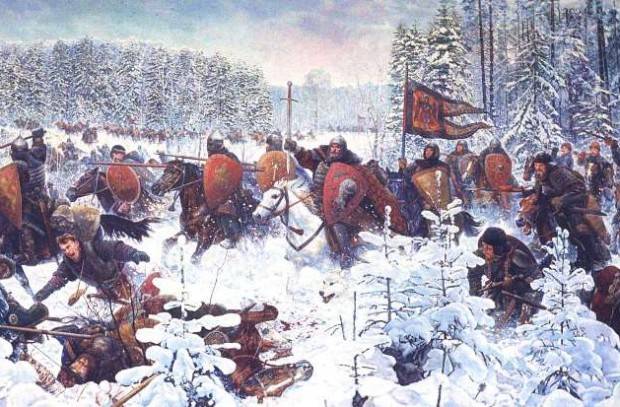 Church writers of the XIII century called the Mongol-Tatar invasion the punishment of God for the internecine wars of the Russian princes.

At the same time, a number of historians believe that the Mongol yoke contributed to the consolidation of the Russian principalities. But the process of unification of the principalities was far from peaceful, bloody civil strife occurred during the Mongol-Tatar yoke. History rivalry between Moscow and Tver, especially Yuri Danilovich, Prince of Moscow and Mikhail Yaroslavich, Prince of Tver is a clear confirmation of this.

The struggle between them was fought for the fiefdoms of Pereslavl-Zalessky, Kostroma, Gorodets, Nizhny Novgorod, for influence in Novgorod. In the 1305 year, in the Horde, Mikhail Tverskoy managed to kill the price of Moscow Prince Yuri, who also participated in the auction for the sale of the label for a great reign, and received it.

Returning to Russia, he went with the army to Moscow, but failed to take it. In the second campaign in 1308, Mikhail “did a lot of evil,” but he also did not take the city.

After re-receiving a label from 1315 from the new Khan Uzbek, Mikhail went along with the Tatars to Novgorod, who decided to abandon Michael and invited Yuri Danilovich to reign. Together with the Tatars, Mikhail defeated the Novgorodians, "who have lost many good husbands, boyars and merchants, and suffered a complete defeat."

Yuri, the prince of Moscow at that time was in the Horde, here he intermarried with Khan, marrying his sister Konchaka, who was baptized. The shed, the Golden Horde capital, was the center of the Sarai diocese, there was already a half century of the episcopal chair, which at that time was headed by Bishop Varsonofy, probably he baptized Khan's sister with the name Agafya.

The ruler of the Horde, Uzbek, although it ascended the throne of the Horde with the help of pro-Islamic forces, Islam adopted seven years later. Therefore, in this matter he was also guided by the prescriptions of the indifferent Yasa of Genghis Khan. To strengthen his influence in Russia, he chose this method - he married his sister to the Prince of Moscow, and the prince handed him a label for reigning in Vladimir.

Upon his return from the Horde, Yuri Danilovich decided to restore the lost positions and immediately moved his army against Mikhail Yaroslavich. The prince of Tver was accompanied by the army of the Mongol temnik Kavgadiya, detachments of Khiva and Mordovians. Foreigners, as Kostomarov writes, "having entered the land of Tver ... indiscriminately burned every dwelling that fell in the way, and tortured people with different torments, which they seized in their hands."

Mikhail Tverskaya, learning about the approach of the enemy, spoke out against the combined forces of Muscovites and Tatars. 22 December 1317, the battle of Borteneva took place. The Tverchanians emerged victorious from it, the young wife of the Moscow Prince Konchak and his brother Boris were taken prisoner. Yuri Danilovich managed to slip away to Novgorod, and the next day Kavgadi himself surrendered.

The situation had to be explained to the khan, and Yuri together with the Novgorodians, the princes of Suzdal-Rostov land, the boyars from Russian cities left for Orda, where they brought a number of accusations against Mikhail Tverskoy, including the charge of killing the sister of Khan, who died in captivity. There is an assumption that Michael's opponents poisoned her.

Mikhail Yaroslavich was summoned to the Khan's bid for proceedings. The prince understood that a trip there amounted to death. But still I went, because he knew very well that the refusal would lead to the next raid of nomads and the ruin of the principality of Tver. After the unfair Khan's trial, Mikhail Tverskoy was slain. The prince was killed beyond the Terek, at the pass, later called Krestov, during the campaign of Uzbeks in Persia.

At the cost of his own life, Prince Mikhail saved the lives of thousands of Russian people, he died a worthy Christian death. Two centuries later, the Russian Church canonized Michael of Tver as a saint.

In the confrontation between Tver and Moscow, in the end, the latter won, but Yuri Danilovich’s methods of strengthening power and elevating Moscow cannot evoke either understanding or justification.

Ctrl Enter
Noticed oshЫbku Highlight text and press. Ctrl + Enter
We are
The death of the princes Yuri of Moscow and Dmitry the Terrible Ochi. Tver uprising 1327 of the yearRussian allies of Mongolo-Tatars
186 comments
Information
Dear reader, to leave comments on the publication, you must to register.