Weekend reading. How Charlemagne Invented the Military Occasion for the Modern West

December 23 2017
56
And the “Favorite Weekend” column presents a short story about the events of more than a thousand years ago, which to this day remain without an unequivocal interpretation of historians. It is about the founder of the Carolingian dynasty, King of the Franks Charlemagne, and about his Iberian campaign. A campaign in which the army of invincible Charles, considered the founder of the Western European Christian world, suffered a crushing defeat for the first time.


The historiographic oddity is that Karl, starting his campaign as a Christian king, who is going to help the Christians of the Iberian Peninsula in the struggle against the Muslim emir conqueror, ended up being the killer of Christians. At the same time, the Christians themselves, who lived in the territory of modern Spain, pinned great hopes on the campaign of Charlemagne - as on the campaign of the liberator from occupation by the Arabs and Moors. But the "liberation" did not take place.

As a result, under the occupation of Arabs and Moors, those territories that were not Muslim before Karl’s arrival also fell. First of all, we are talking about Pamplona - the Christian city, which was plundered with particular cruelty by the Franks. Meager historical sources say that the soldiers of Charlemagne robbed and killed everyone in Pamplona, ​​despite the fact that these people were their co-religionists, who were waiting for protection from the Frankish Christian army.

It is really difficult to explain this, if one nuance is not taken into account. For the Pyrenees, the great army of Charlemagne passed at that time only with the declarative goal of “liberating Christians”. In fact, for Charles, the subordination of these territories to the kingdom of the Franks — along with resources — was important. As indirect evidence, one can cite the fact that the campaign to Spain took place after a conversation with the then head of Zaragoza. And this chapter was a Muslim religion. Moreover, the Muslim "governor" asked the Christian king to help him in the fight against another Muslim leader in Spain, Abdrahman - Emir of Cordoba.

Naturally, requested not free of charge. Namely, the word “non-paid” was the key, as many other details of the rule of the future first emperor of medieval Western Europe show.

That is, money, land and other resources are in the first place, and “help to Christians” as a pretext. Nothing like today's day, if you change the word "Christianization" to the word "democratization"?

Recall that the first Crusade took place only three centuries after the campaign of Charlemagne to Spain, but it turns out that Karl showed future Western generations how, under the specious pretext of Christianization and the struggle against the invaders, to wage an aggressive campaign, leaving chaos after the intervention.

Returning to the attack of Charles' troops on Christian Pamplona, ​​one cannot fail to report the retribution that the Franks had expected. Outraged by the actions of the "Christian brothers", the Basques (then - the Vascons) staged a "bloodbath" for the Frankish troops. 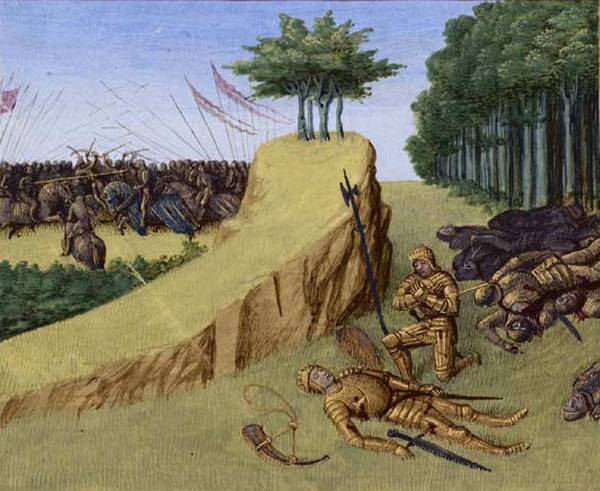 15 August 778, in the Ronneval Gorge, they attacked, according to some data, the entire Frankish army, according to others - its rearguard. The Franks were defeated, losing several prominent warlords, including the margrave of Roland, later sung in the Germanic epic.

Ctrl Enter
Noticed oshЫbku Highlight text and press. Ctrl + Enter
We are
Poltava. The nail in the coffin of the Swedish state
Military Reviewin Yandex News
Military Reviewin Google News
56 comments
Information
Dear reader, to leave comments on the publication, you must sign in.