KAMAZ has completed the preparation of serial production of P6 engines

December 21 2017
64
A formal event was held at KAMAZ to hand over the final stage of work as part of the development and production of the P6 family of six-cylinder in-line engines, reports press office company. 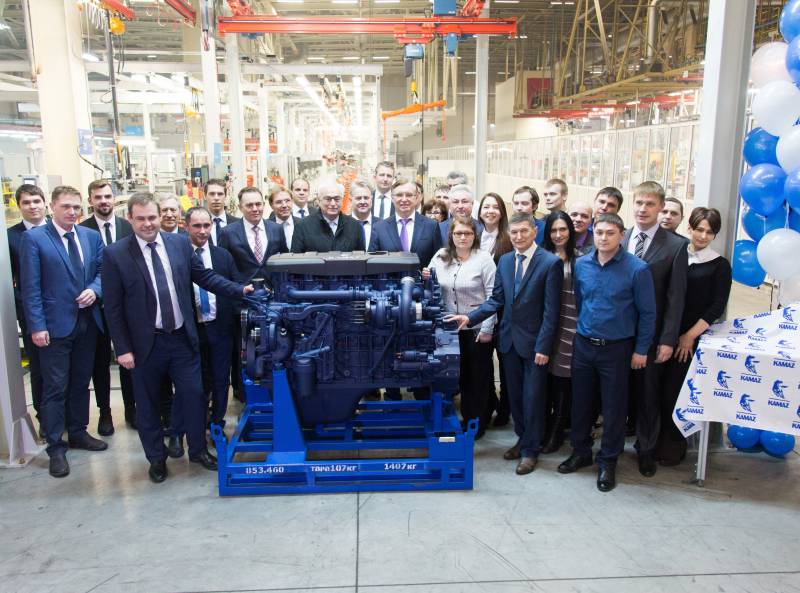 One of the world's leading manufacturers, the Liebherr group of companies (Germany), became a partner of the leader of the Russian truck engineering industry.

“With the commissioning of the new conveyor, the production capabilities of KAMAZ PJSC are significantly expanded. In 2018, the batch production of a new family of KAMAZ engines - six-cylinder in-line engines Р6 will be launched. These engines will be equipped with Kama trucks of the promising generation K5, the production of which is scheduled for 2019 year, the release says.

The innovative approach laid in the basis of our projects is especially in demand in the production of KAMAZ vehicles of a promising model range, which we are currently working on. We strive to make our product optimal for the consumer and enter new markets. New powerful and reliable engines Р6, created in cooperation with our partner on the basis of advanced world technologies, will allow us to significantly improve the technical and consumer characteristics of cars and make trucks safer for people and the environment,
quoted by the press service of the company's general director Sergey Kogogin.

The Liebherr Group has been developing and manufacturing engines for difficult climatic and operating conditions for more than 30 for years. Along with engines, the Liebherr Components department specializes in the design and manufacture of a wide range of high-tech components and assemblies.

History Cooperation of our companies has been around for many years since our companies began working on the development of a gearbox for the first KAMAZ trucks. In this regard, it is especially pleasant to be present at the birth of a new engine, which is the result of the hard work of our developers and engineers. The newest production line created exclusively for P6 engines is also impressive. I would like to express special thanks to the KAMAZ employee who made the implementation of this project possible and wish success with the new engine,
said during a solemn event, the president of the Liebherr group of companies, honorary doctor of engineering, Willi Liebherr.

It is reported that the new production pipeline РHNUMX "is equipped with the latest technology, in some moments it is superior to foreign counterparts." At the same time, “great attention is paid to compliance with technology and detailed quality control, - each operation can be traced to 6%.”.

Currently, all the lines of the new conveyor are working in commissioning mode. By the end of 2017, the release of 7-10 power units is planned. Industrial engine production will be launched in March of the 2018. The new line is designed for the production of 12 thousand power units per year.