Trump and train. What is American money going to?

December 21 2017
8
US President Donald Trump almost simultaneously made two opposing statements. 18 December, he promulgated his “brilliant” doctrine, and the same day a tragedy occurred in the USA: a passenger train derailed in Washington state, not far from Seattle, and its two carriages fell from the overpass to the cars. Six people died, more than 80 - injured. Among the victims - not only passengers, but also those who were driving in cars. 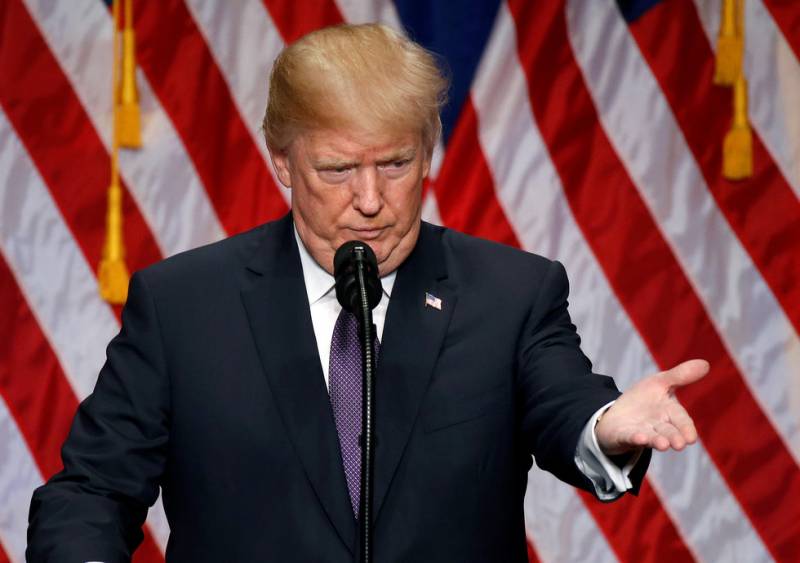 The American President expressed his condolences to the relatives of the victims, wished recovery to the wounded. One can only join condolences and wishes. Least of all on this sad occasion, I would like to once again write critical material about the United States, but it's all about Trump's other words. It would seem that he finally saw the light - the money of American taxpayers did not go there.

«Seven trillion dollars spent in the Middle East. While our roads, bridges, tunnels, railroad tracks and much more are crumbling, He wrote on his Twitter. And do not forget to add: "But not for long!“Also, Trump called for the approval of his infrastructure plan as soon as possible.

Of course, these Trump words are also welcome. I would like to live to see the happy day when American money will cease to flow to fueling conflicts in the Middle East. To support terrorists under the guise of "opposition". The merciless airstrikes that kill civilians and, in addition, destroy the infrastructure of countries that are already much poorer than the United States and its European allies. And if even in a country like the United States, infrastructure problems lead to such tragedies, then one can only guess what kind of indirect damage people suffered in those states that bombarded trillions of US dollars.

But will we live to this very day, when the words of our overseas “partners” will turn into a deed? Alas. A little earlier this tramp statement the White House published the text of the National Security Strategy, and Trump presented this document (work on it began back in March).

The main thesis of the strategy: "Peace through power". So, again, some of the countries will fly bombs, again there will be pumping of "good" terrorists, again money will be allocated for the overthrow of the authorities in unwanted Washington states.

And, finally, directly a money issue. Trump condemned the reduction of the military budget, called it "devastating". And he added that he, along with his administration, "put an end to this."

So what does the US President really intend to end: the allocation of money for all sorts of foreign policy adventures (as in the Middle East) or a reduction in the budget for military needs (which provides just an increase in funding for various military adventures)?

And without it, Washington is spending more on military targets in 10 than Russia, and five times more than China. And here it is also planned to increase the US military budget. When was Trump sincere? When did he present the national security strategy or when he promised that the money would go to railways, bridges and other objects important for the population?

Actually, the American national security strategy does not contain anything new. All the same as it was. Again, the notion of “rogue states” (including Iran, which means glowing again in the Middle East), again “Russia and China are the main threats”, again “the fight against international terrorism” (in practice, it only turns around the growth of this terrorism). Is that added to the opposition to cyber threats. Well, yes, how can you manage without fighting sinister “Russian hackers”? Are they the ones that Trump allegedly made president?

In Russia, they criticized this strategy. Presidential spokesman Dmitry Peskov said: "There is a reluctance to abandon the unipolar world". Chairman of the Committee on International Affairs of the Council of the Federation of the Russian Federation Konstantin Kosachev, in his blog on Facebook, said:The tonality of the document leaves no doubt that the United States is not satisfied with the changes in the world in recent years, and they intend to reverse them, returning the recent version of Pax Americana as a supposedly fair world order.».

So, in the new strategy - almost all that was with Obama. But when Trump went to power, he promised to revise Obama’s position on many foreign policy issues, in particular, on the Middle East. If from his rival Hillary Clinton expected tightening of this position, then from Trump, on the contrary, easing.

The position on the Middle East is not just an opinion concerning one particular region. This applies to the position of the United States around the world. - Do they refuse arrogant, criminal interference in the affairs of sovereign states or continue all the same aggressive policies as in Iraq, Libya, Syria?

For now we can only see the continuation of aggressive actions. Moreover, Trump, it seems, was not enough that Libya, Syria, Iraq, Yemen are ablaze. It was necessary to pour more kerosene into the long-standing conflict between the Israelis and the Palestinians, which was done, contrary to the opinion of almost the entire world community.

So it is unlikely that we will wait for Washington to stop investing huge amounts of money on political and military "dynamite", which is undermining the world not only in the Middle East, but also everywhere where the United States decides to defend "its" questionable interests. American money will continue to go on trying to support the role of Washington as a world gendarme. The train of war will move on. However, earlier such “trains”, in the “cabins” of which the “machinists” sat, imagining themselves the masters of the world, always suffered a crash.

Ctrl Enter
Noticed oshЫbku Highlight text and press. Ctrl + Enter
We are
Missile strike 7 April. Hot news on a cold headResults of the week. "Either true or all is well"
8 comments
Information
Dear reader, to leave comments on the publication, you must to register.