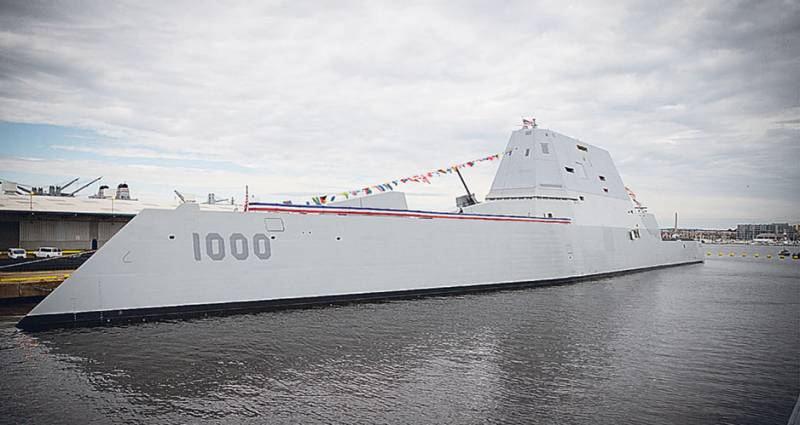 The US Navy over the past decades has repeatedly changed priorities. Battle ship procurement plans were seriously adjusted in 2008.

Prior to that, the command of the US Navy focused on coastal operations against land and sea forces of countries such as Iran and North Korea. Now, in connection with the new stage of the struggle for world domination, the United States pays more attention to the possibilities to act in the ocean zone against the fleets of its closest competitors - China and Russia.

By the end of 2017, the command of the U.S. Navy specified plans to increase the number of naval personnel in 30 years. Previously, it was planned to bring it to 308 combat and auxiliary units, including 88 cruisers and destroyers. Currently, the total planned composition fleet increased to 355 units, and cruisers and destroyers should be 104 (for more details - “Pitfalls of a new generation”). To reach this indicator, it is necessary to put into operation 23 new ships of the ocean zone, the Congressional Research Service (CRS) calculated.

In search of the ideal

In addition to accelerating the pace of construction, Navy officials are exploring options for extending the service life of some surface ships, in particular, the Orly Burk DDG-51 destroyers. Thus you can delay the acquisition of new ones.

The project to create a new generation of destroyers DDG-1000 initiated in the early 90-s. The multipurpose ship for fire support and operations in coastal waters protected by the enemy was to replace in a more advanced technological form the Iowa type battleships that had been withdrawn from the fleet. In addition, the DDG-1000 was intended to perform the functions of a new generation of CG (X) type cruisers, whose creation program was canceled.

Officially, the new program started on November 1 2001 of the year. The Navy announced the abandonment of plans to develop the destroyer DD-21 in favor of creating a promising warship (Future Surface Combatant Program). When the DD-21 program was announced, the acquisition of 32 units was assumed. According to the project of a prospective warship, it was planned to develop and adopt three new classes, including the destroyers DD (X) for delivering high-precision long-range strikes and fire support to the marines, the CG (X) cruisers to perform air defense and anti-missile defense missions, LCS corvettes (Littoral Combat Ship) to counter submarines, attack boats, from which an “attacking swarm” can form, and sea mines in coastal waters. 7 April 2006, the Navy announced the renaming of the program DD (X) to DDG-1000. In the process of transforming previous plans, the number of ships consistently decreased: first, to 16 – 24, then to 7, and finally to 3. Currently, three ships are at the stage of construction and testing.

Destroyers from the future

21 November 2016-th in the transition from the east coast of the United States to its home base in San Diego (California) from a destroyer, who was in the Panama Canal, had "engineering and technical problems." According to the American media, the power plant has actually failed due to the heat exchangers.

The second destroyer Michael Monsour (Michael Monsoor, DDG-1001) left the Bat Iron Works shipyard in Bath, Maryland, in early December and began factory testing. According to the plans, it will be delivered to the fleet in May 2020. Lyndon B. Johnson, DDG-1002, the third in the series, is supposed to be adopted by the 2021 in December.

The total purchase cost of the first two ships is estimated at 9,149 billion dollars. The third destroyer according to the budget of the 2018 fiscal year is worth 3,733 billion dollars.

The estimated value of all three DDG-1000 URO series destroyers, as noted in the recent annual report of the US Navy, will be 12,9 billion dollars. During the time elapsed since the decision to purchase the third ship of the series, the purchase has risen in price by 3,904 billion or by 43,5 percent. To a certain extent, the increase in the cost of the DDG-1000 program was associated with a reduction in the number of destroyers ordered by the fleet from seven to three.

The design of the DDG-1000 used many new technologies, including in the field of hydrodynamics, providing "wave-cutting", as well as the architecture of the hull, reducing the probability of detection. In the construction of the superstructure used a large number of composite materials. The ship is equipped with a propulsion system, a powerful computing system, automation equipment, dual-mode radar, a vertical launcher of the new type, two 155-mm advanced ship guns AGS (Advanced Gun System) and two 57-mm small-caliber anti-aircraft artillery complexes (MZAK). For AGS, new 155-mm projectiles with rocket accelerator LRLAP (Long Range Land Attack Projectile), whose firing range exceeds 110 kilometers, were to be used. Total ammunition - 600 units, on 300 shells per cannon. However, in November 2016, the Navy decided to stop buying LRLAP projectiles because of too high a cost — roughly 800 thousands of dollars each. Instead, they chose Excalibur guided artillery shells, which are twice as short in range and cost around 250 thousand dollars apiece.

The full displacement of the DDG-1000 is 15 612 tons, which is almost 64 percent more than modern cruisers and destroyers URO (9500 tons), length - 182,8 meters. Full speed is 30 knots, cruising range is 10 thousands of miles. The ship is equipped with universal vertical launchers (UVPU) Mk-57 with 80 cells for cruise, anti-submarine and anti-aircraft missiles. MH-60 helicopters and unmanned aerial vehicles can be based on the ship.

DDG-1000 has a reduced crew in the number of 175 sailors, 147 of whom serve directly the destroyer, and 28 are part of the ship's air group. For comparison: on modern cruisers and its "classmates" in the US Navy, the crew numbers almost 300 people.

The reduction in numbers is associated with the introduction of new technologies and automation of onboard systems, as well as the use of electric propulsion. It should also help reduce operating costs.

Judging by the implementation of the program DDG-1000, three new destroyers are unlikely to play a significant role in strengthening the American fleet. Most likely they will become experimental ships for the development of new naval technologies, of which they have been introduced into these ships beyond all measure. But it is hardly worth ironic about this. Suffice it to recall the domestic projects 677 and 22350. About 677 of new systems and technologies were integrated into the main St. Petersburg submarine of the 200 project, which quite naturally led to problems during their development. The desire to maximize the implementation of the latest achievements in the design of the main frigate of the 22350 “Admiral Gorshkov” project gave a similar result.

We would be cheaper

The US Navy, reflecting on the prospects for the development of combat surface ships, made a choice in favor of proven projects. In July, the fleet command announced 2008 that it intended to abandon the purchase of the DDG-1000 and resume the order of the destroyers of the type DDG-51, whose mass production was well-established.

Explaining the change of priorities, the Navy said that they had revised operational requirements that would dominate the future, and destroyers are now needed to fulfill three priorities: waging an anti-submarine war in the open ocean, countering anti-ship missiles and ballistic missiles. Although DDG-1000 could cope with the first two and be modified to perform the third, the Navy command found the project DDG-51 more suitable, and most importantly - cheap.

All cruisers, destroyers and frigates, purchased by the fleet with the 1985 of the fiscal year, were built at the Bat Iron Works of the General Dynamics' Bath Iron Works - GD / BIW corporations and Ingalls Shipbuilding of Huntington Ingalls Industries (Huntington Ingalls Industries' Ingalls Shipbuilding - HII / Ingalls). In recent years, almost all the production facilities of GD / BIW and a significant part of HII / Ingalls, where orders for airborne forces and the coast guard are also carried out, have been occupied under the laid-down surface combat ships.

The main manufacturers of shipborne radar systems in the United States, as well as integrators of onboard systems are Lockheed Martin and Raytheon. The first is the lead contractor of combat systems for destroyers of the DDG-51 type with the Aegis BIUS, while the second is responsible for the DDG-1000, whose base core is considered to be Total Ship Computing Environment Infrastructure. At the same time, Lockheed performs part of the work on the DDG-1000, and Raytheon - on the DDG-51. Lockheed, Raytheon and Northrop competed for the right to be the manufacturer of the AMG (Air and Missile Defense Radar) ship radar for the DDG-51 Flight III series. In 2013, the Navy announced the winner of the tender for this radar company "Reyteon".

Hundreds of smaller companies are working with the aforementioned leading manufacturers of surface war ships - suppliers of materials and components that are part of industrial cooperation. The financial situation in US suppliers to the shipbuilding industry has been a matter of concern in recent years, especially since some of them are the only suppliers of surface warship programs.

Divination without a card

Another problem for the congress in the 2018 fiscal year, as before, is the lack of a naval roadmap to achieve the three priorities for cruisers and destroyers. First, to support the recovery of ships. Secondly, for the introduction into the fleet of a large number of ships with integrated electric propulsion systems or other innovations that could provide an adequate supply of on-board weapon systems. Thirdly, for the introduction of technologies that significantly reduce the number of crew and operating costs.

On the eve of the 2008, when it was planned to order the destroyers DDG-1000, and then the CG (X) type cruisers, built on the basis of the design of the DDG-1000 hull, the Navy presented a road map with a justification for all three positions. However, the end of the DDG-1000 and CG (X) programs in favor of continuing to purchase DDG-51 destroyers left the Navy without a solid development program, since the Flight III DDG-51 series will not be equipped with an integrated propulsion system, and also do not imply any modifications. reducing crew or operating costs.

Experts believe that one of the solutions to the problem would be a further change in the design of the DDG-51. Another suggestion would be to initiate a program to develop a new class of cruisers or destroyers. But this is a matter of the future.

Ctrl Enter
Noticed oshЫbku Highlight text and press. Ctrl + Enter
We are
Diplomats of the People's Commissariat of Defense: on the eve and during the warRusso-Japanese War 1904-1905's. State of the Russian fleet. Bad luck and missed opportunities
Military Reviewin Yandex News
Military Reviewin Google News
24 comments
Information
Dear reader, to leave comments on the publication, you must to register.