December 19 2017
4
Solar Corsica in recent days is not inferior to no less than sunny Barcelona in the degree of mass turbulence. Nationalists, who traditionally supported the island’s independence from France, broke through to power on this island. At least, it is this image that they unobtrusively pushed with a certain degree of wink at “their own”. At the same time, the winning nationalist bloc is not in a hurry to officially declare independence. Paradox? Not at all ... But first, a little background. 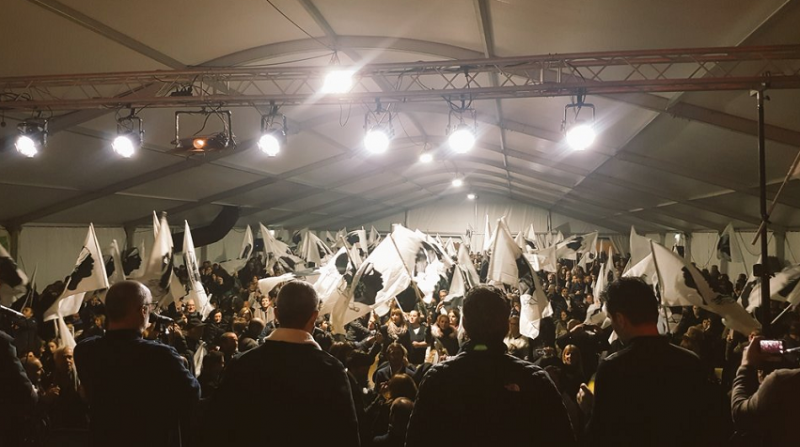 About who the Corsos (the basis of the future Corsicans) disputes are still going on. One way or another, but Corsica is a real Mediterranean cauldron of nations. The Corsicans were influenced by the Etruscans, Greeks, Carthaginians, Romans, Byzantines, Franks, Arabs, Pisans, Genoese and other peoples. As a result, the Corsican language itself is a dialect of Italian, which, one way or another, will crush the Corsicans with the French, despite all the long-term French expansion, including culturally.

In the 16 and 17 centuries, the island was reeling uprisings against the Genoese. Genoa with varying success suppresses them, but cannot control the island completely. It can not to the extent that Corsica is famous for pirates and the slave trade. Genoa so wants to put things in order on this Mediterranean get-together, which calls for help from the French.

From 1740, Corsica is experiencing simply a festival of riots and insurrections, which by 1755 lead to the announcement of the Corsican Republic. In the same year, the flag of the republic, and at the same time the white flag with the head of the Moor in the center becomes the battle flag of the rebel leader General Pascal Paoli. By the way, now the same flag flies over the headquarters of the nationalist bloc Pe a Corsica. 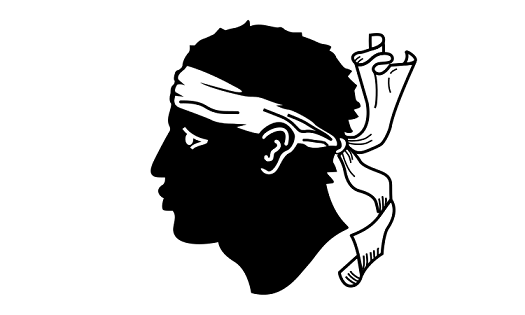 By 1764, Genoa loses almost the entire island. General Pascal Paoli sits in the chair of the head of the first independent Corsican government. But not long the music played. Officially, Corsica was still listed as Genoese. The latter, though lost the spirit of this territorial hemorrhoids, but were also deeply in debt for previous military expeditions. Therefore, according to the Treaty of Compiegne signed by Genoa and France, Genoa left Corsica to the French as a pledge. And since few people believed that Genoa could pay, France instantly occupied the island.

Since then, the region has lived relatively calmly, no matter how surprising it may sound, until the formation of a shaky peace in Europe after World War II. The outbreak of separatism, and later overt terrorism, occurred not only because of the island’s low income, it was the background, but rather because of the thousands of repatriated Frenchmen who had rushed to the island from the already independent Algeria. They Paris was going to distribute the ownerless, in his opinion, the land. At the same time, the French were in no hurry to invest Corsica. One can only imagine the degree of enthusiasm of the locals. In addition, the Corsicans saw this as another round of assimilation.

The already explosive situation became even more aggravated when the French authorities added TNT as a search for a new nuclear testing ground. The fact is that the Sahara for these purposes was lost to France. And this is where Corsica turned up. It was planned, among other things, to conduct a series of underground nuclear explosions. It did not reach them, but on the island it exploded thoroughly as early as the beginning of 70's.

A whole series of acts of civil disobedience swept across the island. Naturally, various political movements and “fronts” began to multiply after the rain. Soon, they even began to form the real armed patrols, who mainly dealt with the repatriation of the French. The region in fact became the brink of civil war between the Corsicans and the French living in Corsica. By this time, on the territory of Corsica, the first explosions of the still thin handicraft bombs, which, however, carried only a psychological effect and did not cause anyone harm, thundered.

Most clearly, the situation in Corsica is described by the so-called “drama in Aleria”, which would look somewhat anecdotically in the style of “forward to the wine warehouses” if it were not for the corpses. In 1975, one of the nationalist movements carried out a violent seizure of ... a winery! The patriots didn’t like the fact that the winery was owned by a migrant from Algeria. By the way, a small detail was led by the nationalists Edmond Simeoni, the father of one of the leaders of the victorious nationalist bloc of Pe a Corsica Gilles Simeoni.

This time the patience of Paris was exhausted. The nationalists barricaded in the wine cellar were thrown at by reinforced police units, helicopters, and even armored vehicles. During the ensuing battle, two policemen were killed, and all the rioters were captured. 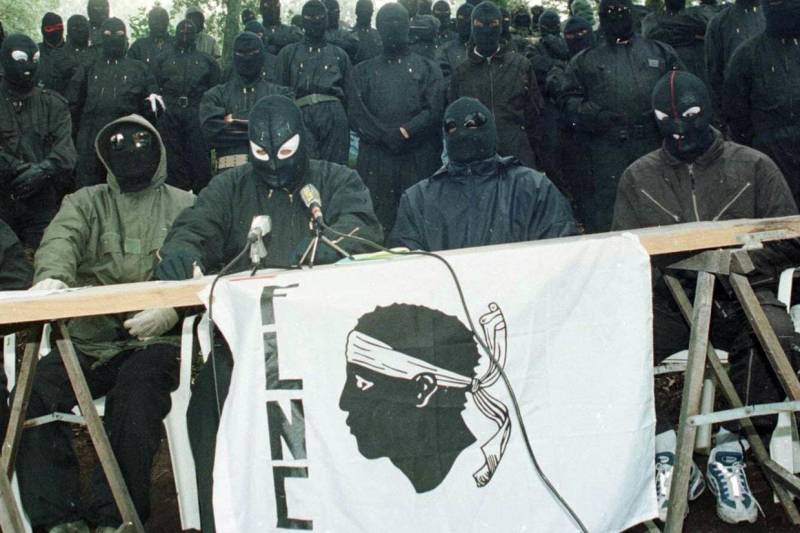 It was during these events that the National Liberation Front of Corsica appeared as a terrorist military organization and the most famous among such structures. The victims of this "front" are mostly visitors. The issue of financing this organization was resolved in a Corsican way gracefully - looting and smuggling. Surprisingly, but organized in 1975, in this format, the Front reached as far as the 2014 year. On the completion of their combat activities, they stated quite recently, when they realized that the overwhelming majority of the Corsicans were tired of their terror. Moreover, the Front has long been split from the inside and rolled into Corleon's “pure business”. In addition, during the years of the struggle for independence, quite legal political forces emerged, acting from the standpoint of, if not independence, then sensible regionalism and cultural identity. What is this power? 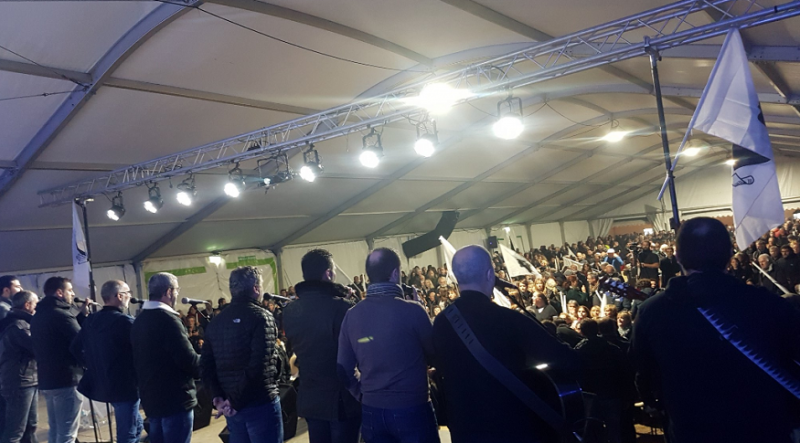 Continuation of the festivities of the nationalists. Their flag does not change, at least some continuity ...

Naturally, the above nationalist bloc Pe a Corsica, which appeared relatively recently, but was very successful, thanks to the clever and competent political steps of its representatives. Pe a Corsica, in essence, is an alliance of two parties of varying degrees of nationalism and radicalism - Corsica Libera (leader Jean-Guy Talamoni playing the role of the radical) and Femu a Corsica (leader Gilles Simeoni, positioning himself as moderate). In turn, these two parties are reformed structures that unite less successful fragmented, often openly separatist parties and political movements - from Corsica Nazione to Inseme per a Corsica and the Corsican Nation Party (the name speaks for itself). 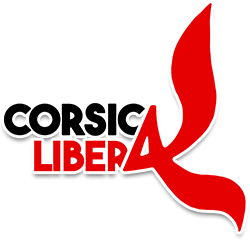 As a result, the radicalism of some and the irreconcilable voices associated with it was smoothed out by the moderation of others and, accordingly, the votes that an adequate voter would give would go to a common fund. And here is the victory. Incidentally, in the presidential election in Corsica, Marine Le Pen was the undisputed leader, so that Paris had already won over the election of this inadequate spineless gerontophile Macron by the problem of Corsica. After all, Le Pen spoke out against European migration policy, or her absence. And the issue of migration for Corsica, as you know, is far from idle. A few years ago, the radicals scared away even the well-to-do French, who bought the Corsican estates, with constant threats of violence, what to speak of surging migrants from the Middle East ...

What is on the agenda of the victorious nationalists? No, not independence. First, make Corsican language the second state on the island. Secondly, to release political prisoners, i.e. militants nationalists, but this is like a maximum program; according to the minimum program, they hope to at least transfer them from French prisons to their island prisons. Thirdly, Pe a Corsica is going to establish the status of a resident of Corsica in order to give them privileges in owning real estate, thus stopping the influx of non-Corsicans. And fourthly, the nationalists want to introduce an advantage for the islanders in hiring. And talking about their demands for immediate resistance to migrants and Islamic fundamentalism, which is an integral part of their baggage, and say no.

In general, the political bloc in fact requires extended autonomy. But why not independence? Everything is simple here, behind cautious speeches that Corsica is not yet ready for independence, it is quite prosaic - “Mr. Ataman has a lot of gold reserves”. The region is subsidized, which means that the nationalists simply cannot offer their voters any other option than the constant blackmail of Paris and intimidation of its independence. And before that, the Corsican “separatists” did not differ in consistency in implementing their efforts for independence. 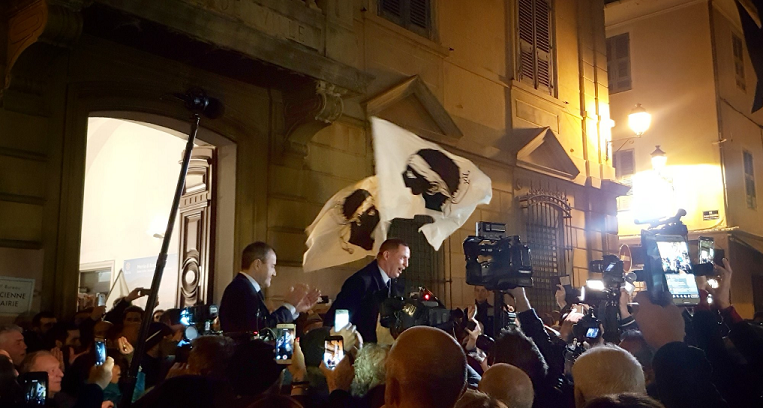 In the center of the crowd speech pushes Gilles Simeoni

For example, not only daddy Gilles Simeon distinguished himself in the political struggle for the so-called independence, but also his grandfather. Here are just a grandfather Gilles looked at the independence of Corsica from a very specific angle. He was an advocate of irredentism, i.e. combining Corsica with ... Italy. At the same time with Italy, when Mussolini’s very charm ruled there. Gilles himself, although considered moderate, being a lawyer by profession (and this profession is just a tattered field for populism - defended by a pod - this is a duty, defended by a decent person - my civil position) warmly defended the nationalist who shot the local prefect. So you can expect anything from this comrade.

The only fact is indisputable, once again the separatist region will suck out money with loud statements. At the same time, the situation for Paris is almost a stalemate. Do not give money - provoke the islanders into a round of disobedience. To give money is to provide financial support for possible development, and in a developed region, avoiding the cries “stop feeding the center” is even harder than taking a beggar for maintenance. Life will show…

Ctrl Enter
Noticed oshЫbku Highlight text and press. Ctrl + Enter
We are
Corsica is preparing a letter to Paris on independence from FranceIn the Arizona desert, may appear "solar towers"
Military Reviewin Yandex News
Military Reviewin Google News
4 comments
Information
Dear reader, to leave comments on the publication, you must to register.