According to Stalin's course

December 16 2017
298
The most important result of the post-war monetary reform was stabilization and the subsequent increase in the payment and purchasing power (PPP) of the Soviet ruble, which in fact transformed it into the interstate currency of the USSR and the people's democratic countries. He strengthened around 10 years. But the Khrushchev monetary reform of 1961 of the year de facto pegged the ruble to the US dollar, worked to lower the PPP and eventually depreciate the national currency, which lasted until the last days of the USSR. 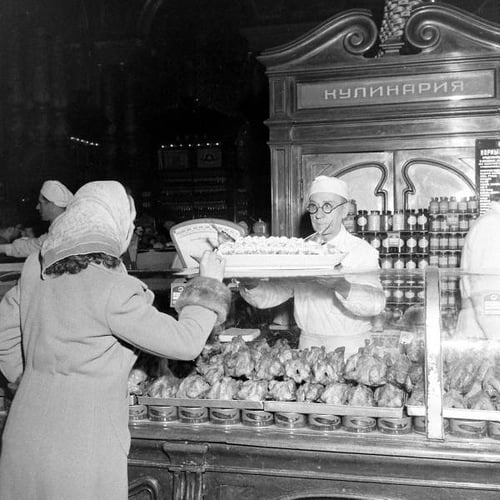 As noted by Arseny Zverev (1900 – 1969), the People's Commissar (later Minister) of Finance of the USSR in 1938 – 1960 (he was in charge of the preparation and conduct of post-war reform), in October 1943 of Sovnarkom raised the issue of streamlining money circulation, curbing inflation and long-term pricing policy in the country. First of all, it was necessary, Zverev emphasized, to carefully calculate the volumes of accumulated ruble surpluses, their distribution by sectors and social groups and the real value (that is, PPP - A. Ch.) Of the total money supply. Such an analysis helped determine the choice of a reform strategy and, therefore, financial and economic policy.

“Money during the war years could not help depreciating, although the state in every way restrained this tendency by strictly controlling the supply of demand for consumer goods in the rear regions and by tightening price regulation in non-state trade (trade cooperation, collective farm markets, etc.),” stated Maxim Saburov (“Scored Names-2”), head of the USSR State Planning Committee at the end of 40-x - mid-50-x. “Nevertheless, inflationary pressure, accumulation and circulation of excess money supply among a number of social groups and in a number of regions threatened the country's economy with serious destabilization. And this scenario was all the more necessary to eliminate on the eve of the post-war economic recovery and, accordingly, the new five-year plans for the socio-economic development of the country. Therefore, it was necessary to exchange money while increasing their purchasing power. ” As Saburov recalled, Stalin drew attention to these and related questions even on the eve of the Battle of Stalingrad.

Pre-reform studies were conducted in 1943 – 1947. The complex result was the decisions of the Central Committee of the party "On the abolition of the card system and monetary reform" (13 December 1947) and jointly with the Council of Ministers of the USSR "On monetary reform and cancellation cards for food and industrial goods" (14 December 1947). These documents, which indicated in detail the mechanism and parameters of monetary reform, made it possible in a record short time to accomplish the tasks outlined by the Soviet government as early as the autumn of 1942.

The socio-economic effect of the planned reform was already apparent at the end of 1946, when rumors about it began to spread rapidly. Especially in the rear regions, where the money supply, turnover and savings deposits were at least one and a half times higher than in the frontline and exempt from occupation. Thus, according to the Ministry of Internal Affairs and the USSR State Control (March - May 1947), since December 1946, large deposits in savings banks are becoming more frequent, there is a landslide purchase of both expensive products and consumer goods. Cash incomes of restaurants are growing, there have been cases of large-scale thefts from warehouses, resale / resale of domestic and lend-lease goods in domestic trade. From 16 December 1947-th to 1 in May, the 1948-th bodies of the Ministry of Internal Affairs revealed hidden from accounting and stolen products for almost 62 million rubles, illegal contributions to 101,3 million rubles were withdrawn. These trends occur in a quarter of the country, but are most characteristic of the rear regions. That is, excess cash is increasingly turning into purchases and commodity-money transactions.

But in the middle of 1947, when the rumors about the reform were “strengthened”, the population began, figuratively speaking, to massively invest in savings banks in order to minimize losses from the exchange of money. The total amount of deposits for May - November has more than tripled.

Taking into account these factors and, accordingly, to prevent a stir, the period of reform was set at two weeks. The mentioned decisions of the Central Committee and the government (1947 year) also indicated that there was significantly more money in circulation than is needed for the national economy, because of which their purchasing power decreased. This in turn led to a gap between state and market prices and to the use of the situation by speculative elements for profit at the expense of the population. Therefore, comprehensive measures are needed to strengthen the Soviet ruble. Namely: the exchange of cash in hand on new is made in the proportion of 10 rubles for one; deposits up to three thousand rubles are revaluated 1 to 1, that is, without loss; from three thousand to ten thousand rubles - with the actual decrease by 20 – 35 percent of the original amount; ten thousand rubles and more - with a reduction of 50 – 60 percent; for holders of bonds (available at that time for 95% of the working-age population of the country) the recalculation of 3 to 1 is set, but the current loan issued and distributed in December of 1946 to 1947 in October will be repaid at par.

Recall that government loans were subject to mandatory repayment. And the state fulfilled its obligations. But Khrushchev in 1961 stated that, due to "the numerous requests of the working people," the maturities of loans are shifted by at least 10 years. By that time, the socio-economic situation in the country was already far from stability. Voluntarism in the management of the national economy, a mediocre foreign economic policy, when the USSR bought citrus fruits, dates, coffee grains and cocoa beans for gold in developing countries, led to severe imbalances and an acute budget deficit. By the way, the last government loans (mid-end 50-x) were repaid only in 1990 – 1991, when the real ruble PPP fell at least 10 times ...

In social terms, the strategic parameter was that, first of all, according to the aforementioned government decisions, the wages of workers and employees, as well as the incomes of peasants from government procurement and other labor incomes of all segments of the population, are not affected by the reform and will be paid in new money in the old amounts . Secondly, the rationing system for food and industrial goods of mass demand was canceled. In parallel, in the state trade (retail and wholesale) there was a transition to uniform prices. At the same time, they were reduced in retail, for example, for bread and flour - by 12 percent, cereals and pasta - by 10 percent, for other consumer goods (food and non-food) - by 10 – 14 percent.

As a result, commercial prices have plummeted (that is, in market trade). As a result of the aforementioned, we emphasize interrelated measures, the purchasing activity of the population already increased by almost 1948 percent by the spring of 25. This allowed more than a third to compensate for the total government spending on reform.

We know the opinion of the Minister of Finance of China (in 47-s and mid-30-x) Kun Xiangxi's reform-40: “The leadership of the USSR showed the highest competence in regulating prices and money circulation during the war. As a result, a relatively low level of money depreciation was an important launching pad for monetary reform and lower prices. Of great importance was the fact that in the rear areas the state, by encouraging market trade in food and household items, especially in field cooperation, did not abandon its participation in the supply of the same areas. That prevented price spikes and unmet demand. In short, a comprehensive base was created for the post-war monetary reform in the USSR, which strengthened its financial and economic system. ”

Canadian economist Tom Ransfield noted: “If there had not been a controlled financial and economic situation in the USSR during the war and in the first years after it, the authorities would not have decided on such a large-scale monetary reform. Judging by the price reduction that is planned to be held annually, and other decisions, the reform has an obvious social aspect. Especially important in terms of domestic loans of the military and postwar years. The price reduction also strengthens the commodity value of the new Soviet money. ”

The “removal” of Arseny Zverev began on March 5 of 1953, when he was removed from the candidates for membership in the Presidium of the Central Committee of the party. He was elected to this position on the proposal of Stalin at the plenum of the Central Committee in October 1952, shortly after the XIX Party Congress (Autumn Leader). Zverev actively objected to Khrushchev's economic adventurism, insisting in 1960 on a “one-off” confiscatory monetary reform (carried out in 1961), at raising prices for goods and services, at stopping the repayment of 40 – 50 government loans. As a result, Zverev in May 1960, became a pensioner and professor of the All-Union Correspondence Financial Institute. Opala persisted in the Brezhnev period. True, the ex-minister was nevertheless allowed to bury at the Novodevichy cemetery ...

Everything that Arseny Grigorievich strongly opposed was already implemented in 1960 – 1962. Khrushchev's economic and financial policies created fertile ground for the destruction of the social community and the USSR.