Putin's press conference as a hint of a new course

December 15 2017
209
In order to evaluate and correctly understand everything that was said as answers to questions at the presidential press conference, it is probably worth listening to it more than once. Two at least, and yes even divided into blocks, since there were enough jumps from side to side. 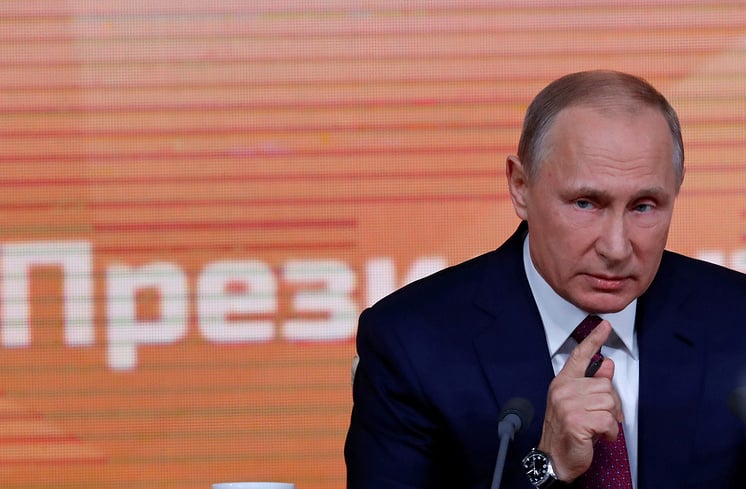 All questions could be divided into three categories: external, internal problems of the regions and elections.

We will not touch the third block, everything is clear here. Putin will win the election, whether he comes from the party or by himself. Another question is what will happen in the next six years.

This is the hottest question, and here's why. Unfortunately, Russia depends on external problems no less than on internal ones. World prices for oil and gas, currency jumps, government contracts and wars, sanctions - all this is reflected in the internal life of the country, and there is no escape from it.

2017 year goes away after two significant events. The first is the end of the operation in Syria, the second is the slap in the face with the Olympics, which the West has given us. And each of these events will have a natural continuation, and both of them are completely interconnected.

The Olympic plush showed that one cannot count on a calm and peaceful coexistence with the West. Beat will be wherever you can hit. And there is no particular difference between the non-admission (and even tolerance on humiliating conditions) on the Olympic political games and the breakdown of the pipeline construction. They are still beating Russia, so all the methods and methods are good here.

The methods are dirty. All the less facts and evidence, all the frantic propaganda. And the process is on the rise, starting with the 2014 year.

Fully warped civil war in Ukraine, non-recognition of the Crimean referendum, Russian troops in Donbas, “Boeing” shot down by anyone (Russia, of course), Russian hackers in Washington and in the US presidential elections and in general, Russian hackers and FSB agents everywhere, if not izovrat Syrian merit, then assign them, sanctions, sanctions and more sanctions.

Well, as a crown - doping disgrace.

And no requirements, no conditions. And this is not necessary. Need complete and unconditional surrender.

And all the cards are dealt. Except one, which also beat Putin. This, of course, Ukraine has waited until the end of the operation in Syria. Putin, in response to a question from a Ukrainian journalist, acknowledged that the Minsk agreements were completely discredited and incompetent.

Given that in Ukraine everything goes to the fact that Poroshenko will sooner or later either fall off the American leash, or be replaced by someone who does not throw it on himself. The result will be blood again and rake it to us. So Ukraine, like the sword of Damocles, is still hanging. And Putin understands this perfectly, hence the truly beautiful passages on this topic.

The fact that warm relations with the West are not foreseen, this is understandable, we have fully demonstrated this. There are minimum questions here.

Therefore, the main part of the questions was devoted, naturally, not to external, but to internal policy. What is more interested in the Russians.

And here it was really necessary to designate a certain specific vector, which the president will follow on his next term of government. And here relations with the West are not as important as the support of their own citizens in 2024, when it will be necessary to vote not for Putin.

By 2024, the growth of civic activity of the population, caused by this factor is quite possible. And society can become a political force that can either vote for Putin’s course for the country and beyond, or radically change it.

From here and hints on greater attention to internal problems.

“The main thing that the authorities and the whole society need to focus on is such issues as infrastructure development, healthcare, education, as I have already said, high technologies, increase in labor productivity.”

Wonderful. Moreover, the deadline is really the last and you can work in these directions tirelessly, and most importantly - without the slightest eye on the West. With which everything is more or less clear.

Money. The propeller and the engine of the entire development process at the same time. Six years is a short time, but to earn money for Russia, not selling its resources, but returning the stolen, both can and should be done.

As a good politician, Vladimir Vladimirovich cannot but understand that one billion taken away from the oligarchs and invested in the economy (no matter where and how) will give much more political points than the 10 billions earned by Gazprom.

"But the government should not be like a bearded man who idly picks out cabbage from his beard and looks at how the state turns into some muddy puddle from which the oligarchs pick out and catch for themselves the golden fish, like we had in 90's and how it is happening in Ukraine now. "

Diamond words. They would also be supported by a case: in 2024, polling stations will take by storm in order to vote for whoever will continue this matter.

"The state will not allow such a scenario in Russia as in Ukraine."

In two ways, very much in two ways. If with regard to the theft, so it is with us today with the order, although, we recognize, work in this regard is taking place. But the agricultural question is rather weak. Landings and few, and some they are unconvincing.

Another question to confiscate is to raise the question, but, apparently, it is still too early.

In principle, the law on foreign companies from 2014, and the subsequent financial amnesty in 2015, were good steps in this field. But success was more than modest. A number of oligarchs preferred to become tax non-residents of Russia, settling in the same Switzerland. But, I repeat, there is work to do here.

So, the vector is marked. The main focus is on raising everything, and in the end - the well-being of Russian citizens.

Not bad, very good. We are waiting for February and a new reference. And there should be no mistakes here, the question of trust, as I said above, and the choice.

Ctrl Enter
Noticed oshЫbku Highlight text and press. Ctrl + Enter
We are
Results of the week. "Who you are lucky, in fact, and will carry a cock, and such a bird as you, I, too, will rush!"Results of the week. "Either true or all is well"
Military Reviewin Yandex News
Military Reviewin Google News
209 comments
Information
Dear reader, to leave comments on the publication, you must to register.