100 years of the Cheka. Will Putin return the Iron Felix to the Lubyanka? 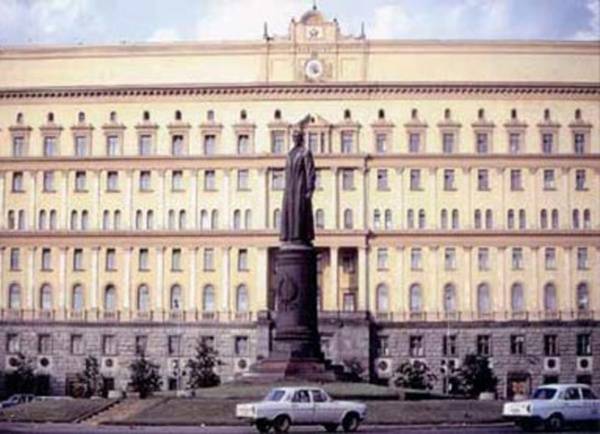 On December 20, the country will celebrate 100 years since the creation of the All-Russian Extraordinary Commission (VChK). Lubyanka Square, which in Soviet times housed the building of the state security body, and now the main computing center of the FSB of Russia, was left without a monument to the founder of the Cheka, Felix Dzerzhinsky: the monument was demolished in 1991 during a coup and never returned to its place. The return of Iron Felix could be a good gift for a significant date, the public said, once again asking the president to restore historical memory.

The All-Russian Emergency Commission for Combating Counter-Revolution and Sabotage became the basis for the state security system of our country and the traditions that were set up then are one of the most important elements of the Russian statehood, the Communist Party leader Gennady Zyuganov reminded in his address to the president.

“Felix Dzerzhinsky played a decisive role in the formation of the Cheka and determining the appearance of the state security officers. His statement that the security officers must have“ clean hands, a warm heart, a cold head, ”and still is a moral standard for all law enforcement agencies. For the greater part of our society, Dzerzhinsky is one of the most respected political figures of the twentieth century. We are convinced that returning to the center of Moscow a monument to a person who has become a symbol of honesty and selflessness will be obstvovat formation worthy of moral reference points in our society ", - said in the appeal. 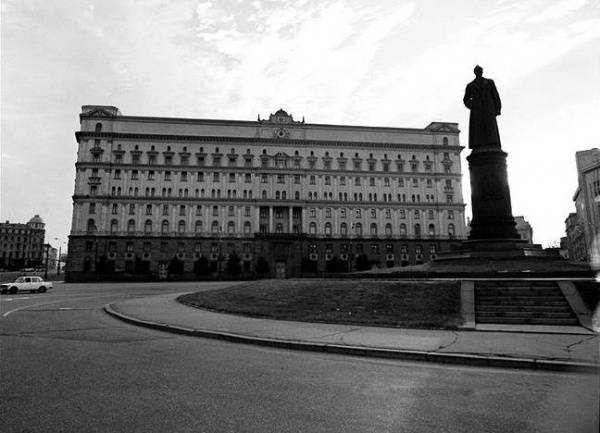 The Communist leader emphasized that Dzerzhinsky was not only the head of the Cheka, but also one of Russia's most successful economic leaders, who laid the foundations for the development of the country's economy and committed "one of the greatest humanitarian feats of the last century" - saving millions of street children.

Every year, on the eve of the day of the employee of state security bodies, rival petitions appear on the network - for the return of “Iron Felix” to and against the Lubyanka. It happened in the year of the 100 anniversary of the Cheka.

Restoration of the monument at its historic place could be a good gift for such a significant date, I'm sure the general director of the Center for Political Information, Alexei Mukhin. According to him, the monument is a useful reminder of both positive events and negative experiences.

“Nobody canceled the historical memory. Monuments are a reminder not only of achievements and victories, but also serious mistakes made by various statesmen and the country's leadership during a certain period. Felix Dzerzhinsky is a symbol of the Cheka, the organization on whose shoulders the Soviet Union grew power. Having removed Felix Dzerzhinsky, we are somehow trying to remove certain periods of our history from our memory. Someone perceives his figure in a positive way, someone in a negative way, but this does not cancel it valuable It’s not in either case. Therefore, for some it will be a monument to the “bloody period", and for some this monument will be a reason for pride. In any case, this is a very valuable reminder of the difficult period of our history, the general stories ", - shared his opinion with Nakanune.RU Alexei Mukhin.

Interestingly, on December 10, 14, on the eve of the 100 anniversary of the Cheka, Putin will give a big press conference, perhaps the president, who started his career in the KGB, will have to publicly state his position on this issue. At least, many of him really expect it. 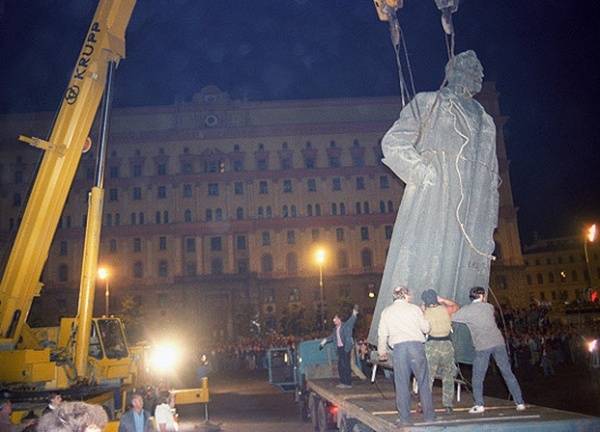 Demolition of the monument to Dzerzhinsky in 1991

The historian of the special services, Alexander Kolpakidi, notes that most people are in favor of returning to Dzerzhinsky, and Lubyanka without a monument looks scant.

"The idea is very good, correct, especially from a purely visual point of view, the area without its dominant looks awful, with the monument it was one of the most beautiful areas of the country. In addition, it is cynical that most people, according to all sociological polls, believe that the monument must be returned, and the monument, however, 25 does not return the years, while they say that we have democracy and the power of the majority. If the majority requests to return the monument, what kind of democracy is it if it is not restored? " - the historian asks.

It should be noted that now in the square opposite the building of the former NKVD (later the KGB), a reminder of other events - political repression - is perpetuated. Solovki Stone was installed in 1990 in memory of people accused of treason. Documents for mass arrests were signed right here, in the offices of state security agencies.

It turns out that some events - especially negative - are the authorities willing to keep in mind, and others, such as the positive contribution of Felix Dzerzhinsky to the development of the country, erase from history?

“If we do not deny the great period that existed in our history, starting with 1917, the monument to Dzerzhinsky should definitely be restored,” says Mikhail Sveshnikov, a member of the Public Chamber of the Sverdlovsk region of the second convocation. “Now society is politicized, and those people who want to eradicate from memory these historical events, all the best that was created in those years, to attribute to him only a negative value, they certainly have a large administrative resource. It is quite possible that the confrontation will be very Seriously, the whole West, as they say, will raise a howl. But we must be fit for what was good and deny what was bad. Dzerzhinsky fought for the creation of a new state until the last days. Lenin's mausoleum stands on Red Square the same as the monument to Dzerzhinsky on Lubyanskaya Square. Although a stone brought there from GULAG was hoisted there, there is a negative side of those events, but it would be wrong to attribute all the negative features to Dzerzhinsky. " 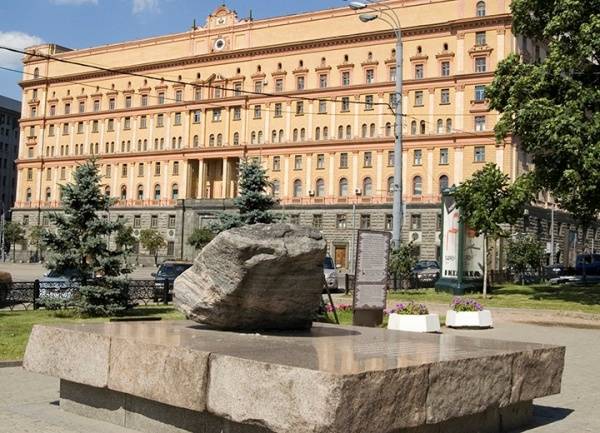 The authorities are afraid of both Lenin and Dzerzhinsky, as reminders of the possibility of another life and a different state structure.

"I don’t think that the authorities will go to the restoration of the monument, because if she is afraid even of Lenin in the mausoleum, then Dzerzhinsky is not far from herself she is even more afraid, because for her these people are mortal enemies who say that another world is possible “A world without violence and exploitation, and our authorities do not need this,” explained Alexander Kolpakidi on the eve of the day.

Dzerzhinsky argued that the Chekists should have "clean hands, a warm heart, a cold head." Probably, now these ideals have nothing to do with the moral principles of the current law enforcement officers and authorities?

"That ideology and the society to which Dzerzhinsky gave his life are alien to them. Therefore, any opportunities to belittle, eradicate the memory of the descendants of this period, cover everything with black red will be used," Mikhail Sveshnikov added in a conversation with Nakanune.RU.

“The ideals of Dzerzhinsky are absolutely alien to this power in all positions: both unclean hands and cold hearts. Everything is not so. If they don’t install a monument to Dzerzhinsky, let them fulfill the request of the FSB shnik 90's - they will restore the Zubatov monument there. will be a symbol of the current government ", - concluded Kolpakidi.

Recall Sergei Zubatov - an official of the police department of the Russian Empire, who became famous in the early twentieth century for trying to introduce methods of provocation into political life. Zubatovshchina became one of the tsarist government’s struggle with the labor movement on the eve of the 1905-1907 revolution. 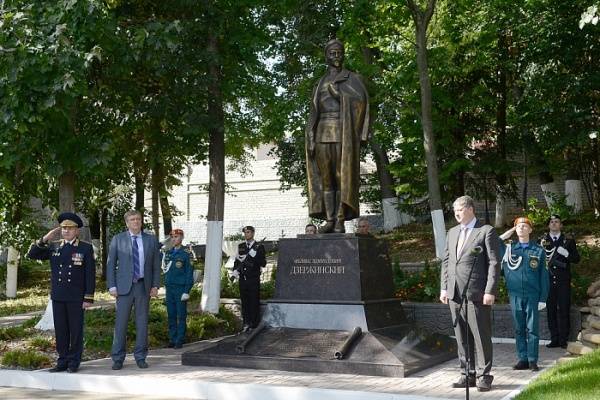 Monument to Dzerzhinsky opened in Kirov

With all the wary and cautious attitude of the authorities to the personality of Dzerzhinsky, in law enforcement agencies the figure of the Cheka founder is perceived with pride and respect, I'm sure Mikhail Sveshnikov. This is confirmed by our interlocutors among the "security officers" on condition of anonymity.

"In addition to political activities, which they are now trying to denigrate, Dzerzhinsky did a great deal of organizational work in building the state. In addition to the Cheka, Dzerzhinsky also led several other areas of building the national economy, including the railway, he saved children in terrible conditions without parents. They have done a great deal of government work, and any society uses the services of law enforcement agencies and the work of such bodies as the FSB, while attributing all the horror to the concentration camps Isations are wrong, because a lot was decided by other authorities. This organization stood on the defense of that state, not the same as it is now, "concluded Mikhail Sveshnikov.

Ctrl Enter
Noticed oshЫbku Highlight text and press. Ctrl + Enter
We are
How I was held in this electionZyuganov in the program "Actual conversation"
Military Reviewin Yandex News
Military Reviewin Google News
69 comments
Information
Dear reader, to leave comments on the publication, you must to register.