Saakashvili and his "roof"

December 15 2017
27
The adventures of Mikhail Saakashvili, a fighter against baryga and Petro Poroshenko, on the roof of the house, and then his miraculous salvation from the hands of the satraps Poroshenko, which coincided with the flourishing of democracy in the Pechersk district court of Kiev, granted Mikhail freedom under the guarantees of MPs of the Parliament, struck many people even in Russia . Russian fans of Bandera dreaming that the hand of the American State Department reached out to the Moscow district courts and arranged for the “flourishing of democracy” there too. 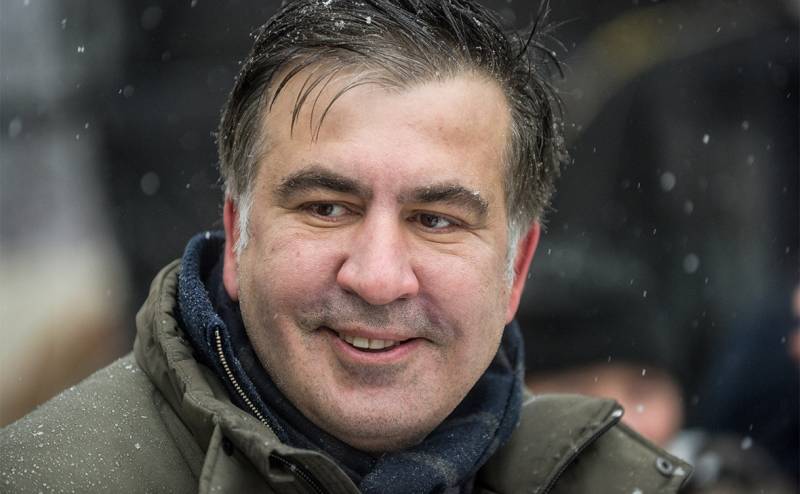 Dmitry Peskov, Putin’s press secretary, said that “with excitement” he was watching the adventures of Saakashvili in Kiev: he was worried that he would not fall from the roof, and not about what our liberal Banderovites like Gozman think. Saakashvili was saved by the Pechersk court because his American “roof” was so powerful that he dispersed all the machinations of Poroshenko’s huckster in the Pechersk court.

After this success of the Bandera democracy, one question is relevant: how long will Petr Poroshenko’s legitimate guarantor of this democracy stretch? How will the State Department of the United States and its embassy in Kiev “leave”? “Rostov is not rubbery,” Yulia Tymoshenko, a former prime minister and also a tireless baryg fighter against corruption, hints at thick democratic presidential prospects.

Delay for a time anti-corruption district court over Poroshenko can only urgent war in the Donbas. Kurt Volker, the American special representative for this war, gives 80% guarantee that it will help Poroshenko. However, the remaining 20% is a lot, specifically - it is the 5-6 of thousands of militants in Kiev who, having trained on Mihomaydan and the release of Saakashvili, are eager to “release” Poroshenko. From all acquired by overworking labor, if you fail to deliver it to the district Pechersk court.

It is noteworthy that the chief of the Interior Ministry and the Nazi "Azov" Arsen Avakov keeps neutrality in the beginning of the swarmer of the "cynical Bandera" Poroshenko and Svidomo Nazi Bandera from the "Right Sector", whose red-black banners occupied Mikhomaydan. Svidomye do not like cynical Peter, maybe the face did not come out or something else.

Poroshenko controls the security forces of the SBU and the GPU, and does not control the anti-corruption security forces of SAP and NABU, and Avakov with the Interior Ministry and Azov is stuck between them. And all this porridge needs is the American “roof” on which Saakashvili sits. And who is in charge here? Saakashvili has the preferred position now. The delirium and the fever of Bandera democracy is a drawbar, which, where the inconspicuous secretary of the American embassy turns, is where it will come out, and it has come to Saakashvili.

For now, Poroshenko’s fate is in the hands of Muzhenko’s generals, who with all his might depicts peremogs in the neutral zone in the Donbas. However, neither the Nazi patriots, nor, most importantly, the State Department, do not consider this a real war, but Muzhenko lacks more. If the matter goes on with such peremogi of the Armed Forces of Ukraine, the flourishing of democracy in the Pechersk court will end with the third Maidan with riots, as the classic warns, “lock the floors, they will soon be robbed”.

The fate of Petro Poroshenko and his “Roshen” stores, of course, is of the greatest concern, they are under the greatest threat. To save, at least Poroshenko’s life, only the anti-corruption court or the city of Rostov can, although some false preachers, after Tymoshenko’s words about “non-rubber Rostov”, speak of the Moldavian border saving for Peter, where his birthplace begins. There is also the Belarusian border, but our huckster managed to quarrel with the ataman of the Belarusian land Lukashenko.

It seems that Misha did indeed speak on Skype, ”one Skype-witness testified,” and he talked with his American “roof”, and, with her permission, went to the apartment where the SBU had arrested him on the roof. It was a subtle operation of the “roof” that made the “dark” SBU, which was already insured by the Pechersk court. So Misha boldly went to bathe and perform the feat on the roof. Everything was thought out, and the main thing was - not to fall from the roof. Anxiety about this Dmitry Peskov makes you wonder who in this special operation played the role of Stirlitz?

Now Saakashvili is waiting for orders from his “roof” about the fate of Petro Poroshenko, and he is already beating him with a clean hoof on Mihomaydan: “We will definitely change one goat!” Given that Pechersk district court is on Mikhail’s side, Poroshenko’s position looks hopeless: Pet has no his court, no "roof."

Unwittingly, perhaps, support Poroshenko has hated him Moscow. A number of ukropolitologov believe that the State Department, and its embassy in Kiev, are afraid to demolish Poroshenko, because Moscow may not recognize the next American protege, whoever it may be.

Ctrl Enter
Noticed oshЫbku Highlight text and press. Ctrl + Enter
We are
Reports from the militia of New Russia for 27-28 September 2014 of the yearResults of the week. "Well, do not change me because of every idiot!"
Military Reviewin Yandex News
Military Reviewin Google News
27 comments
Information
Dear reader, to leave comments on the publication, you must to register.