The National Interest: the dispute over the Kuril Islands will be decided quietly

December 14 2017
125
Moscow and Tokyo keep secret the negotiations over the Kuril Islands, which in Japan they prefer to call the “northern territories”. Secrecy is observed because of the “nationalists”, who may not like the Russian-Japanese compromise. 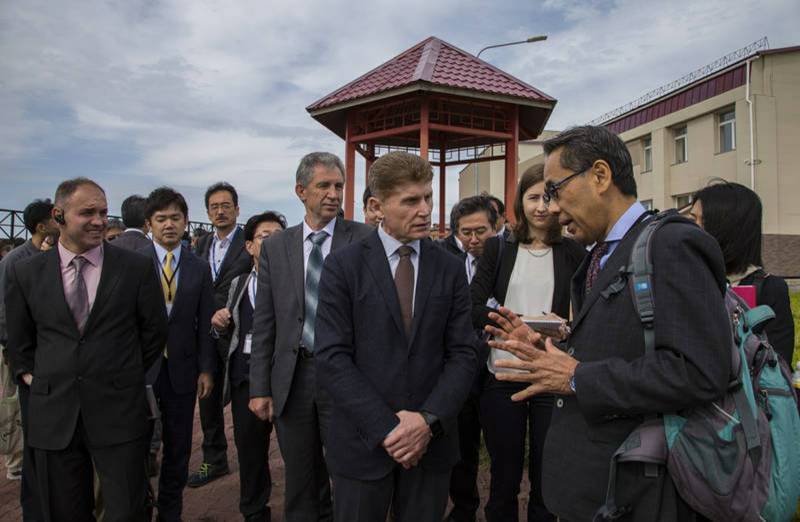 28 June 2017 Sakhalin Oblast Governor Oleg Kozhemyako and Japanese Prime Minister Eiichi Hasegawa's Special Advisor on Kunashir Island. A delegation of Japanese officials and business representatives arrived in the southern part of the Kuril Islands in the framework of the implementation of the agreement reached during the meeting between Vladimir Putin and Shinzo Abe in Moscow on April 27

The publication “National Interest” writes that negotiations on the Kuril Islands are kept secret. Russia and Japan are approaching a solution to the old territorial dispute, but they are negotiating the Kuril Islands "in secret" in order to avoid the anger of "ardent nationalists" who reject any compromises on this issue.

Russia and Japan are moving towards better relations, leads material “National Interest” site "InoTV". Moscow and Tokyo have been discussing the development of naval cooperation in recent days. Over time, the two states can resolve the dispute over the Kuril Islands.

Following the meeting with Admiral Katsutoshi Kavano, Valery Gerasimov, Chief of the General Staff of the Armed Forces of the Russian Federation, said: "We are ready to build up ties between the military departments on the basis of the agreements reached by the leaders during the last year’s summit meetings."

Of course, cooperation between Moscow and Tokyo is not limited to military issues. According to the publication, the Kremlin may try to finally solve the Kuril dispute.

“We had a strategic dialogue with Japan before the Ukrainian crisis (the ministers of foreign affairs and defense), but now it has resumed,” Vasily Kashin, Art. Researcher at the Center for Comprehensive European and International Studies at the Higher School of Economics.

According to the expert, the parties are now trying to strengthen economic ties and sincerely hope that the territorial issue will be resolved.

A possible outcome of the negotiations, notes “The National Interest”, may be the return of the Kuriles to Japan. In exchange, the Land of the Rising Sun will go towards expanding economic and technological cooperation with Russia. Also, the Japanese would agree that the islands will not appear American troops.

However, as Kashin believes, this condition of Moscow will become a stumbling block for Tokyo, because the Japanese are afraid that the recognition of such a deal will undermine their relations with the United States.

There is another big problem: the nationalists.

The fate of the islands worried about "ardent nationalists" from both countries. These people oppose any compromise. And this is why the authorities of Japan and Russia are negotiating "in secret." According to Kashin, they want to avoid the interference of "nationalist elements."

If you believe this expert, as well as the American edition, you can conclude that the question of the ownership of the Kuril Islands is already being discussed somewhere, or even finally discussed, and there’s a point. And only the “nationalists” prevent us from voicing this decision, which opens a great road to the “economic and technological cooperation” of Japan and Russia.

Or maybe election-2018 interfere? Oh, here we give the island - and live technologically!