The contours of war are becoming clearer

December 16 2017
18
After another successful launch of a new North Korean rocket, the sinister contours of the big war on the Korean Peninsula are becoming clearer every day. 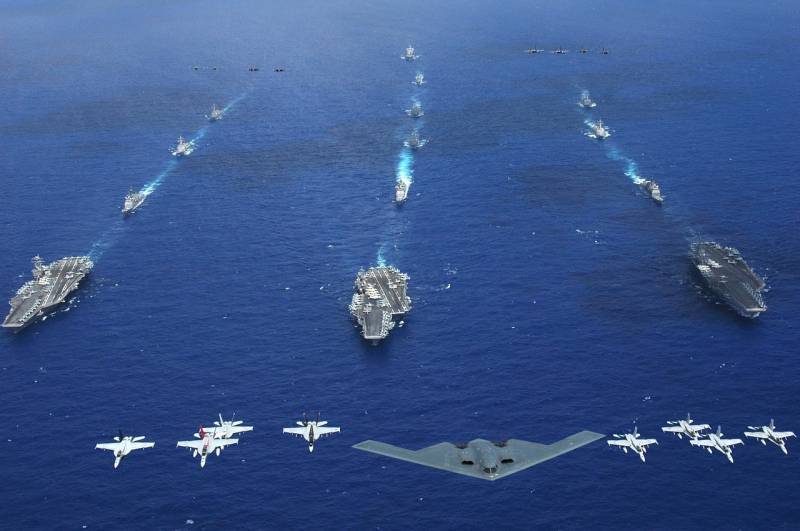 From time to time it seems that the war was actually declared - this was when the United States declared its readiness to proceed with the naval blockade of North Korea. Our eternal geopolitical "partners", as always categorically, motivate their actions by the fact that severe sanctions, which are tightened over and over again by the UN Security Council, allegedly do not bring the desired result, and Pyongyang further and further moves towards improving its nuclear and missile potentials, supposedly threatening world peace and security, although in reality this potential is not enough to knock out even the state of the medium. “The dictator (Kim Jong-un) made his choice,” said US spokesperson for the UN, Niki Haley, loudly and called for depriving North Korea of ​​the right to vote in this organization.

Unfortunately, the Russian mass media tried to “hush up” the topic of the naval blockade, with reference to the administration of the President of the Republic of Korea Moon Zhe Ina, a refutation was published, saying that there was no such talk.

Most of our expert community, unfortunately, once again swallowed the bait abandoned by the highest official of South Korea. But Moon has never been distinguished by consistency and inclination to make statements corresponding to reality - let’s take his well-known ranting about the creation of no less than a million jobs in the Korean public sector while limiting the activities of the basis of the industry of his country - the largest monopolies. Opponents of this new Manilov version have carefully calculated that it will take one and a half hundred billion dollars to implement such promises.

However, in our case, the litmus test function is performed by the testimony of the Minister of Defense of the Republic of Korea, Song En Mu-in, made the day after the rocket fireworks. As you know, the military, even the former, people are very straightforward, and the sailors, to whom this almost seventy-year-old man considers himself, even more so. So, his lawmakers, under the camera, although with some mental breakdown - he still gave out confidential information, Son said that the American plan of the naval blockade of North Korea had already entered the South Korean government and was studied there. A clumsy refutation by Mun Zhe Ina followed later. Therefore, later, the South Koreans were forced to play back, saying that they would respond positively to such a request if it comes. It also turned out that the exercises to intercept the North Korean ships had already been conducted in early November by the South Korean, American and Australian Navy.

Judging by the reports of the Japanese and South Korean media, they tried to soften the American idea somewhat in Seoul. And the essence of the latter, as it turns out, was as follows: the South Korean fleet blocks the western (Yellow Sea) and eastern (Sea of ​​Japan) coast of the Morning Freshness Country.

The Japanese Navy will have to block the central and eastern parts of the Sea of ​​Japan, that is, behind the back of the South Koreans. Well, and the Americans, as befits a world hegemon, will not bother much - they will only get the waters south of the Korean Peninsula, near the subtropical island of Jeju-do.

All this resembles the phrase of a bear from a famous Russian fairy tale - "You tops, and I have roots." Located off the coast of DPRK the fleet the southerners will get the most “gifts” from the northerners, because the fleet of the latter, for the most part, consists of ships of the coastal zone. For the entire DPRK, there are only two modern surface ships - by the way, they were purchased from us under the guise of scrap metal and later redone. But these are just corvettes; they will not be able to enter into open confrontation. Northerners will have to operate with coastal batteries, missile boats and submarines. It is through southerners that North Korean large submarines will break through to star-striped floating airfields - it is possible that some of these subtle diesel submarines will still achieve their goals. One can imagine how, in this case, relations between the Yankees and their South Korean colleagues will improve, because the brave ji-ai will not fail to accuse their South Korean colleagues of having destroyed a hidden vessel that caused global hegemon damage.

There is another snag: it is the southerners who will have to explain why their warships create obstacles for cruising Chinese cargo and fishing vessels, as well as the Chinese Navy with bases in Dalian (Far) and Lüshunkou (Port Arthur), for which the Yellow Sea is something like a chinese lake. The same will apply to our merchant ships in the Sea of ​​Japan.

In this connection, the South Korean strategists issued a plan for a partial blockade only of the northern neighbor’s shipping operations. The main argument is that the total blockade of forces is not enough, so let's say we confine ourselves to checking suspicious ships and those boats that were included in the sanction lists. It is clear that this is only complacency - what “suspicious vessels” are, no one really knows, so they will have to stop everyone who goes under the flag of the DPRK, and in addition also those who follow a neutral flag. And it is still an inevitable war. He joined the work of sobering the Americans and Moon Zhe Ying, who, during a conversation with his actual boss from overseas, said that he was not in a hurry. The arguments are quite sound: there is no certainty that the Jucheheists, despite all their loud statements, were able to “miniaturize” the nuclear weapon to fit it into a warhead. Nor is there any certainty that the North Koreans will be able to ensure that the warheads enter the dense atmosphere not at a right angle, as was done during the last launches, but under the sharp one when the rocket enters the atmosphere with a normal trajectory.

It seems that Trump decided to postpone until the ominous sea blockade. But Washington does not intend to include the "back". The American military who wished to preserve anonymity, as if mocking, openly say that their goal is the gradual suffocation of the DPRK.

The Pentagon’s pursuit of a military solution to the problems was unequivocally demonstrated by the US and South Korean Air Force 4-8 December exercises. They are unprecedented in scale - judging by the open data, approximately 230 aircraft are involved in them.

The main feature of the exercises is an attempt to hide their goals and scale. Although the press still leaked credible information that the goal - practicing strikes on nuclear and military facilities of the DPRK.

Almost all media quotes the information that six “Raptors” and the same number F-35 participate in them. In fact, as it became known, the latter are more - a dozen F-35-b and six F-35-a, plus six aircraft of a similar class of unnamed modification.

The highlight of the teachings is that the role of cannon fodder is assigned to the South Koreans. "Invisible", according to Your, should strike and not suffer losses. Before that, the six American airplanes Grauler EW suppress North Korean air defense, and three E-3 radar detection aircraft reveal the air situation. Two dozen F-15 and F-16, along with strategic bombers, took part in launching training strikes at ground targets, primarily at North Korean rocket bases and mobile installations. That is, all Americans use about a quarter of the total number of aircraft. All the rest of the load on the faithful vassals. In order to sweeten the pill, the Pentagon decided that the general management of the exercises would be carried out from board number one, that is, the aircraft of the President of the Republic of Kazakhstan, and the command of tactical groups from the board of E-737 air command centers. The teachings have already caused concern of ordinary people in the country - to whom funds allow, moved to the distant island of Jeju-do, the rest are praying that the games will not turn into a real war, especially since China, in response, has also begun to hold exercises.

In general, the decades of calm and well-fed life in South Korea seem to be over. Now it is doomed to play the role of a ramming aggressive and thoughtless American foreign policy with all the ensuing consequences for it.

It is for this purpose that the United States and trade preferences for Seoul were provided: American money made it possible to shut its eyes to its huge domestic and foreign debt, and its political “high” patronage was not responsible for human rights crimes during the military dictatorship. Today, the South Korean elite nods at the example of Germany, which not only survived, playing about the same role as a potential American rammer, but also swallowed up the GDR. But Germany was lucky - the Soviet Union collapsed, and the DPRK - no. So Seoul, whether he wants to or not, will have to pay his price for the role of an American vassal.

Ctrl Enter
Noticed oshЫbku Highlight text and press. Ctrl + Enter
We are
A great interview with Sergey Lavrov: about Ukraine, Obama and IranWhat you didn't want to know about England
Military Reviewin Yandex News
Military Reviewin Google News
18 comments
Information
Dear reader, to leave comments on the publication, you must to register.