Europe determined the capacity of its drug market, but was not terrified

December 14 2017
12
Last week in The Hague, Europol published an official report on the state of the criminal business in the European Union. According to this police service, the drug industry is the largest illegal market in the European Union. For the year, criminal structures earn in Europe on the sale of drugs about 24 billion euros. Subsequently, these funds are used to finance other criminal acts, including terrorism. 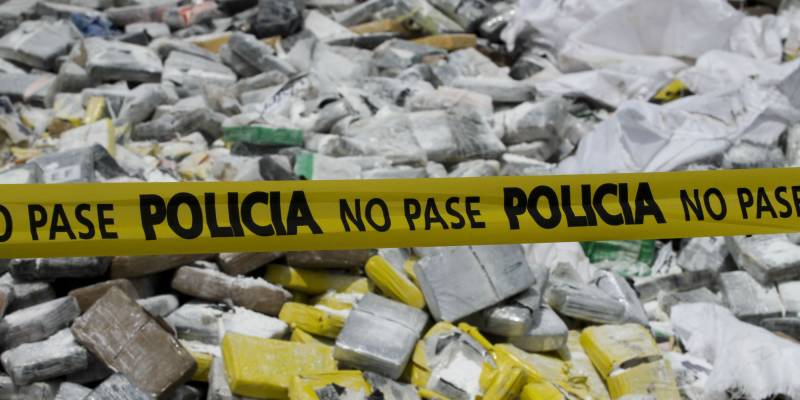 The report notes that more than a third of criminal communities are engaged in the manufacture and sale of prohibited psychotropic drugs in Europe. Cocaine and marijuana are most common in the Old World. However, in recent years, significant changes have been observed in the production of synthetic drugs.

In just the past five years, Europol employees have discovered 620 new psychoactive substances manufactured in clandestine laboratories of criminal communities. Synthetic illicit drugs have become a real disaster for Europe. It turned out that their action is many times stronger than that of traditional herbal drugs.

For example, the effects of opioid analgesic fentanyl are 10 a thousand times stronger than morphine. It is this infection that is now widespread in Europe. Its sale is continuously growing. The trouble of this synthetics is growing. Since the beginning of this year, more than 60 people have died from fentanyl overdose in the UK alone.

Great Britain, most likely, in the report came just by the way. It is unlikely that Europol specifically focused on this country. Although there is a reason to remind her. At one time, British Prime Minister David Cameron was the initiator of the inclusion in the gross product of the country of income from the criminal business - prostitution and drug trafficking.

In those years, Britain's GDP showed a protracted decline. It was then that Cameron made a dubious initiative in order to support the reputation of the British economy. In the depths of the Ministry of Finance have developed special techniques for determining the national income from prostitution and drug trafficking.

The amount was decent - more than 12 billion pounds. It was in 2014 year. Economists then predicted a fall in Britain's GDP at 4-6 percent. In fact, there was an increase in 0,8 percent, secured by a "significant increase in the service sector." British journalist Tony Gosling called the prime minister's initiative a “cheap trick.”

Gosling was supported by other colleagues. They considered that the authorities were deceiving their citizens, hiding the real situation of the UK economy. In the fever, they attached the title of "criminal elite" to the cabinet. Then the passions a little bit because the officials from Brussels took the side of Cameron.

The example of Britain came in handy for them. The European Union after the financial crisis of 2008-2009 for a long time came to life. Its economy has fallen and now has stagnated. The emerging economies of Asia began to attack European countries. The inclusion of incomes from prostitution and drug trafficking in the EU countries' GDP has somewhat corrected the previously unattractive picture. New figures again showed the leading role of the European economy.

Official manipulations were far from harmless. Over time, drug trafficking in Europe began to be treated as an integral part of the national product, not really bothering to fight the criminal business. The very fact that the drug lab every year
the 125 order of new types of synthetic psychoactive drugs is launched into circulation - this is a vivid confirmation.

However, there is another explanation for this. First, synthetic drugs are much cheaper than natural drugs (for example, the cost of a pill of the well-known drug Ecstasy in the Netherlands is about 10 cents). This makes them accessible to students, students, and other categories of low-income youth. In addition, underground laboratories continue to work to further reduce the cost of production of synthetic psychoactive drugs.

Secondly, the bureaucrats of the whole world are not very agile. They need considerable time to legally prohibit the production and sale of new synthesized agents identified. Until then there is their active open sale, not limited by law. Hence - such a shaft of new drugs on the drug market in Europe.

Dangerous alliance has become a reality

In light of all these reasons, the Europol report did not become a European sensation. The local media perceived it as an ordinary statement of fact, and did not even comment on the situation with drug use in detail. Were limited to short informational messages. Apparently, such a public inquiry today on the topic of drug trafficking.

Although the reason may be quite different. About it is not often written. Not so long ago, Russian publications actively quoted the research of Doctor of Economic Sciences Valentin Katasonov about the connection between the world drug mafia and the world banking system. The well-known economist came to the conclusion that international banks and the drug business were not just partners, but made up a single whole.

In his analysis, Valentin Katasonov referred to an article with the eloquent heading “International banks are a division of financial service for drug cartels” in the British Guardian. The British newspaper and the Russian expert did not limit their attention only to the European continent. They showed the relationship of the drug business and the banking system throughout the world.

Only in this way it became clear that the world's largest banks (in the authors' assessment, “all without exception”) are “full members of the drug mafia, occupying the top level in its hierarchy”. “In fact, today, the merger of large bank capital with the drug mafia in the traditional sense (“ drug cartels ”,“ drug syndicates ”) has ended. To draw the line between world banks and drug cartels today is no longer possible, ”concludes his analysis of Katasonov.

Probably, someone will argue with the expert. However, we will cite the generally available argument that $ 320 billions received in the world from the drug trade are not pushed into the pockets of your pants. To move them across countries and continents, we need the capabilities of a banking system that is clearly interested in owning such a breakthrough money.

It did not happen yesterday. Five years ago, the former Deputy Secretary-General of the United Nations and at the same time the former Director of the Office on Drugs and Crime, Antonio Costa, introduced the world community through the media to the main stages of forming an alliance of banks and drug mafia.

History This began in the post-war period with the public disclosure of the facts of the direct participation of the American banks Morgan Guaranty Trust and Chase Manhattan Bank in legalizing the means of the largest international drug syndicates. So began an alliance of banks and drug mafia. At first, his base was America.

It will go around the world later - along with the liberalization of the international movement of money and the strengthening of the dollar as the global accounting currency. “One of the main prerogatives of the national state, sovereign control over incoming and outgoing financial flows, was abolished,” explained Antonio Costa, the reason for the proliferation of drug dealers.

Not even the specially created UN structures like the Financial Action Task Force (the group for the development of financial measures to combat money laundering) helped. A noble undertaking hit the 2008 financial crisis of the year. “In 2008-2011,” says Costa, “the need for cash from the banking sector and the liquidity of organized crime provided an extraordinary opportunity for organized crime to enter the banking sector.”

Thus ended the final merger of the global banking system and the drug business. It cannot be said that the authorities did not see this. An example of Cameron’s initiative shows that the authorities were even interested in such a development. That is why today it behaves extremely passively - either defending the interests of banks, or protecting capital that is now at its disposal.

At least, European politicians are seen more in criticizing countries with an active struggle against drug traffickers (China, the Philippines, Mexico) than in their own initiatives to eradicate this evil. Meanwhile, it is the authorities that can decisively influence the cessation of the production and distribution of drugs.

Experts in this regard recall the experience of the countries of the socialist community. There was a period in history when the socialist countries almost completely eliminated drug addiction in their territories. The situation began to change only during the late USSR, and with its collapse, the international drug market received new opportunities for the further development of its criminal business.

Now Europol sadly states what a European swamp has plunged into a narcotic swamp. The report was published last Wednesday, but so far it has not become a reason for discussing the problem of drug trafficking in EU political institutions. It seems that it has already become perceived as a given, which means that there will be even fewer obstacles in the way of the drug business.