Boat "Detroit" against the Atlantic

In 1912, a small boat “Detroit” overcame more than 6000 miles through the waters of the Atlantic and safely arrived in the port of St. Petersburg. The purpose of the crew is to prove that traveling by sea does not carry any danger. The catastrophe of the Titanic turned out to be a great shock to residents of many countries. The whole world grieved to find out what happened. Then the fear of a possible catastrophe turned people away from sea travel for a long time, and the sale of tickets for any and all ocean liners sharply declined. 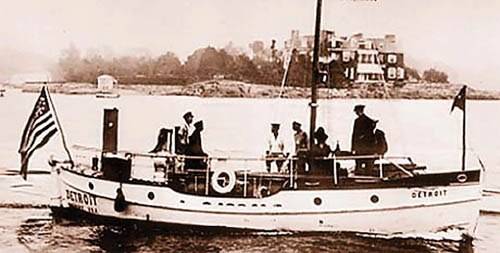 Then the son of the newspaper magnate "Detroit News" William Scripps had the idea to revive the trust of travelers in the maritime vessels. The decision was not spontaneous: the Scripps company produced internal combustion engines. The owner did not miss a single case, so as not to "promote" their goods. And William was a great lover of boats, and therefore once again show the products of his company at its best was a matter of honor of this gentleman. How can you miss this opportunity? At the beginning of the 20th century, internal combustion engines were a novelty, powerboats have not yet found wide application in life, and their capabilities have not been fully studied. Therefore, Scripps thought, decided that if he now in fact does not show the “goods by face” and does not prove its necessity, then someone else will use this opportunity. Therefore, the motorboat needs to cross the Atlantic, leaving Detroit, get to St. Petersburg and prove to the whole world the excellent quality of Scripps engines, first, and second, that traveling the seas is no more dangerous than traveling by car with the engine of the same company . 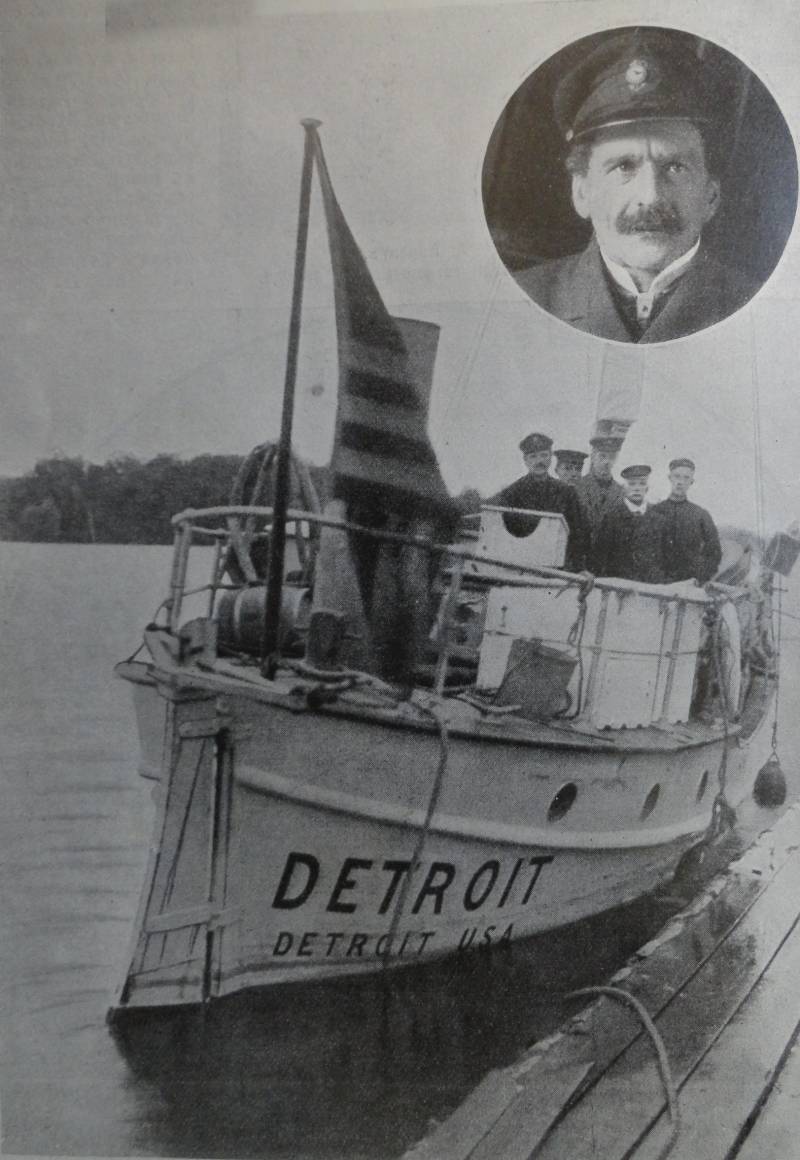 "Detroit" in St. Petersburg. Top right is his captain.

Soon there was no order for Scott Matthews in Ohio for a small but durable cutter, which was built in Port Clinton. Scripps demanded from the contractor of the excellent quality of the vessel. William did not spare the money for the construction.
In finished form, the boat had a length of 10,65 m and 3,05 m in width. In terms of size, it was more like a lifeboat. The hull consisted of three compartments, and the bow and stern of the vessel were raised. The mast rose above the deck on the 7,5 meter. However, the main pride of the ship was the Scripps gasoline engine with 16 horsepower. The ship had a draft in 1,5 meters, displacement was 14 tons. 4350 liters of fuel were poured into five metal tanks. Under the berths of the crew were tanks with water volume of 1300 liters.

And so, on a beautiful summer day, 25 on June 1912, in Port Clinton, the launch was launched and gave him the name “Detroit” after the city where Scrippis lived and worked, and the largest newspaper that bore the same name.

However, Sir Scripps did not wish to lead the expedition, although he had experience in such enterprises and even headed the Detroit Water Motor Club. The position of captain of the boat was chosen New Yorker, Thomas Fleming Day. Captain Day at that time was already fifty years old; he had experience of navigation across the Atlantic a year earlier on a twenty-five-foot skiff "Sea Bird".

26 June 1912 of the year on the pages of the Detroit News was posted a photo of the crew of the Detroit, consisting of eleven people, preparing the ship to sail.

On July 2 of the same year, the Detroit team, before moving away from their native shores, visited the city, after which the ship was named. The supplies were purchased there in Detroit. And the documents that exempted the vessel from customs duties were drawn up in the same place.

12 July in New York team, filling to the brim with fuel tanks, finally hit the road.

Judging by the memories of Day, which were later included in his book, the boat’s crew consisted of barefoot youths: Charles Earl, a young man of twenty-one years old who had just graduated from Harvard, was the assistant captain (Day had known him since childhood); The chief engineer was a native of Detroit, Walter Morton, a twenty-nine-year-old young man who had never gone to the open sea before. The second engineer and mechanic was a certain William Newstedt, about whom Thomas Day wrote that he "turned out to be worse than just useless." Incredibly helpless in front of seasickness, frightened by the endless bumpiness, from the very beginning of his voyage, William turned out to be practically unnecessary ballast on the ship. Newsted refused to work with minimal rolling, lay flat in the cabin, and neither persuasion, nor threat, nor curses addressed to him had any effect

Traveling around the Atlantic has proven to be extremely difficult. The ocean showed its stern disposition almost immediately. The voyage began with a great storm. And the team had to immediately hold the exam for strength and strength of mind. The position of the crew was aggravated by an unforgivable mistake committed on land: during the preparation of the vessel, the ballast had to be firmly fixed in the hold. From the strongest wave strikes occurred unbalance of the vessel, the boat began to roll strongly from side to side. Waves swept the ship. The team had to walk constantly in rubber boots. By nightfall, the crew was cold and cold. The watch crews put on everything that was possible: shirts (yes, not one by one), sweaters, jackets - nothing saved from piercing wind and water flows. Thomas Day recalled later that he had to keep the watch for thirty-six hours without sleep and rest. Eating had to stand, straight from the cans, while trying to stay on the deck for handrails and cables.

Fortunately, the storm ended as suddenly as it began. These were the days of true bliss for the whole team. Finally, they were able to calmly eat, drink hot coffee. And the captain, having boiled a bucket of water on the burner, first shaved. As he later admitted, it was the best day of his life.

After eating and putting himself in order, Day gets a sextant and begins to measure the speed of the vessel. It turned out that the boat is going very well, overcoming 140 miles in a day. The motor really turned out to be of excellent quality. The only drawback was too much engine noise. It thundered so that the team spoke only with a cry, and only in short minutes, when the engine was jammed solely for preventive purposes, was it possible to calmly talk.

After a lull, the ocean again put fearless seafarers to the test: the second wave of the storm began. With a wave of its hand at Newstead, who was endlessly seasick, the team met the second blow of the element more prepared, cohesive and calm. Thus, the team reached the shores of Ireland. The crew didn’t experience any special adventures, except for a small fire on the ship, which the team coped with very successfully, putting out the fire using a portable fire extinguisher produced, by the way, by the same company as the boat.

By the way, Captain Day, plotting the travel route, built it in such a way as to be away from the shipping routes of ocean liners. Indeed, Thomas was afraid that in total darkness, some ocean giant would simply not be able to notice their cutter in time and crush it like an egg-shell.

And yet, the meeting team "Detroit" is not passed. In the endless expanses of the ocean, they were “lucky enough” to meet with the airliner “America”, as tall as a six-story house. The two-thousand crowd, having poured out onto the deck, excitedly waving a galdela and waving its hats, welcoming the brave navigators. The captain of "America", coming out on the bridge, tried to calm the crowd of passengers, promising that they would certainly save the passengers of the boat, take them aboard and provide them with all the necessary assistance. The fact is that the captain somehow decided that they were met on the way by a miracle of survivors drifting on a boat, the passengers of the sunken Titanic. However, the Detroit team kindly refused the assistance offered. The only thing the crew asked the captain to send a radiogram to his native Detroit with the words: "We are all right!". The main newspaper of Detroit immediately placed an article about the successful navigation of the team on the first page.

And then came the 7 August 1912 of the year. Boat "Detroit", spending on the conquest of the ocean for three weeks and another sixteen hours, entered the port of Queenstown.

The port pilot, seeing the cutter, first asked where the gentlemen came from. Upon learning that from New York, the pilot was very surprised, and led them to the harbor for free, explaining that he does not take payment from the heroes.

In Queenston, travelers spent a week and a half. During this time, they had a great rest, gained strength, slept off. The only thing that bothered them so much was the meticulous and overly annoying newsmen, who demanded for their readers more and more new details of their extraordinary journey.

After stopping in Queenston in this way, Detroit headed for the shores of Southampton, passing along which it was easier for him to reach the Baltic, and there, you see, it was easy to get to St. Petersburg. Petersburg was the final destination, the finish of Thomas Day's voyage.

At the mouth of the Neva, a boat was met by Russian warships, who escorted him as an honorary escort. Residents poured ashore and enthusiastically waved their hats. The team stared in amazement at the crowd welcoming them. And it was surprising what: every second person met was dressed in a military uniform. The crew of the boat did not see such honor ever. The harbor of the Imperial River Yacht Club was festively decorated with flags, a military orchestra thundered.

They say that Day, before going down to the shore, kissed the motor, which, despite the unimaginable roar, never let travelers down, did not stall, brilliantly coped with the most difficult task and delivered the team unharmed to St. Petersburg.

And there was only one thing that Thomas Day very much regretted, that the patron of the arts, Sir Scripps, did not take part in the voyage.

Thomas Day certainly deserves a few separate lines, since his insanely risky venture has not left without a trace. It has contributed to the development of small ships. Moreover, it dispelled the fear of long sea voyages. Day proved that such trips are possible, for this we need reliable, more modern engines, a good rigging of the ship. Thomas grew up in a poor family. He is obliged to his position in society solely due to his personal qualities: inconceivable perseverance multiplied by talent. A passionate fan of yachts and motorboats, Thomas is not afraid to go on a perilous journey across the ocean. After a successful journey across the Atlantic, he leaves the post of editor of the newspaper and opens a new page in his life. He begins to design and build yachts. At the same time, an inscription appeared above the entrance of his shipyard: “Gain hope everyone who enters here.”