Death row Should we wait for their appearance in Russia

December 13 2017
45
What happened was something that many Westerners and our analysts really could not have imagined. Putin announced the withdrawal of a group of Russian troops from Syria. Announced, I must give him his due, beautiful. Worthy. Probably, for the first time, our soldiers and officers were openly and at the highest level thanked for their feat and combat training, as well as for professionalism not from the Kremlin’s rostrum, but right there on the battlefield. 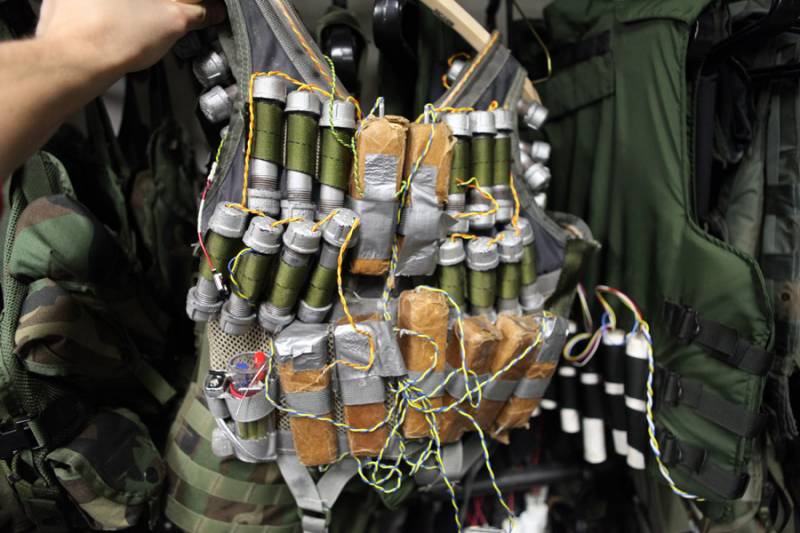 In my memory, this has never happened. Yes, it was New Year, which the president celebrated with the fighters in Chechnya. But so, right, without polite in the direction of our allies and "other forces opposing the terror," never happened. Listening to his speech before the soldiers and officers of the base in Syria, I involuntarily felt a sense of pride for these people. A sense of pride in our army.

However, almost immediately after this statement was followed by strange messages in the network about the possibility of increasing terrorist activity inside our country. And these messages most often began to come from Western Europe, Ukraine and the United States. And almost immediately they were picked up by some “truth-lovers” from Russia. "We must prepare for terrorist acts," "Europe and the United States have already been hit by a wave of terrorism," "now the returning militants will take revenge." There are many such messages.

It is clear that any celebration, on which large masses of people gather, is potentially an object of attack. It is clear that such events will be the object of increased attention of our special services. New Year's holidays by the number of objects of the crowds of people are the most "dangerous". Even the fact that there are people on the territory of our country who wish to conduct such acts is understandable. To completely exclude such events would be folly.

Therefore, today it is necessary to understand what is in the heads of the terrorists. Why is a completely normal and young man going to kill other innocent people? And having understood this, we can understand where and when the danger will increase, and where there is no such danger.

The first postulate is deeply hammered into the heads of our readers by the traditional postulate. A terrorist must be a radical Islamic extremist.

This is complete nonsense. In the traditions of any world religion, including Islam, there is not even the concept of "terrorism". That is what causes such an internal struggle among Muslims. Traditional Islam denies the very possibility of killing a person. By the way, just like Christianity. There is denial, but there are also suicide bombers. What is the problem?

And the problem is ... knowledge of the basics of religion. Young people from traditional Muslim areas and republics are not different from young people in Christian and other areas. She gladly perceives external manifestations of faith, but is not at all interested in the very essence of her religion. Today it is already possible to speak not about the “tops”, but about the “tops” of such knowledge in young heads.

And at the same time, it is the youth today that is the main consumer of Internet products. The "old generation" knows, and the younger generation knows where to find it. And most have a smartphone. Remember stories those who broke up with terrorist organizations. The vast majority of these people were recruited through the Internet. And the original view of religion was also formed via the Internet.

It should be noted, and another important feature of our present. Quite a large part of those who participated in the attacks are people from among the "new converts." Simply put, from among those who are initially set to "learn" new religious dogmas and postulates. And here we go to the next thought.

Terrorist organizations and groups include well-trained psychologists and ideologues. These are not religious fanatics, they are professionals in influencing the human psyche, in putting pressure on weak points, in manipulating consciousness. The “clean sheet” that people who have adopted a new religion are is perfectly filled with “the correct interpretations of the Koran or the Bible.”

Someone will object. Not all converts become terrorists. I agree. Not everyone. Bomber - product piece. In addition to searching for new knowledge, other factors must be added for this. Look at the women who went to Syria. What is the reason for this decision? Except, of course, the above. The reason is simple: unsettled personal life and the search for a prince on a white horse. In the same way, if we analyze the lives of specific people, very simple, but important for a person, problems come to light. And for a young man, these problems often grow to the level of unsolvable.

We often forget that terrorism in the form in which we see it today is a rather young phenomenon. The first suicide bombers, in the form we are talking about, appeared just 35-40 years ago. Somewhere in the 80 of the last century. And the basis of their preparation was not even religious dogmas, but purely ideological ones. Those that are used in most countries to prepare the army. "You must be ready for death for the country, for the Motherland!" "Your heroism and readiness for death will bring you eternal glory and memory of the people!" "Your descendants will be proud of your feat!" Replace the words "Motherland", "country", "people" with "faith", "Allah", "Jesus" - and you will get a ready slogan of a terrorist.

Instill in a young guy or girl hatred of another state, hatred of another nation, hatred of another social order, and you will get an almost ready terrorist. Or a soldier. And if you add the thought that those enemies are to blame for all the troubles of your state or people, then the word "almost" will disappear. For example, even go nowhere is not necessary. Just look at the youth of Poland, the Baltic States, Ukraine and several other countries of the Asian region.

For the emergence of serious enough terrorist groups there, it is enough just to shift the vector slightly. In Crimea, captured Ukrainian saboteurs, and in fact terrorists, do not consider themselves as such. They are soldiers and officers of the Ukrainian army or special services. And if you replace the faith in the Square and rich Ukraine with the faith in heaven on earth through the "correct religious laws"?

At the end of the article I would like to highlight the differences among suicide bombers. Such differences exist and are used in training in militant camps.

More recently, the main "material" for educating a terrorist were people who believed in the victory of a great idea. In the victory of the "right faith." In the victory of their own people in the "struggle against the oppressors." People known to us from the films about the revolutionaries of the past. Death for a bright future. The classic representatives of the European "ideological" - the soldiers of the IRA.

Today, due to some differences, another category of suicide bombers is more often used. More precisely, suicide bombers. These are wives, best of all European appearance, the lost insurgents. It is easy for a woman mourning her husband to instill the need for revenge for her deceased husband. And, using other methods, already in the training camp, including medical ones, turn it into an obedient "bomb."

There are also small groups. In particular, those who decided to commit suicide. Here we see several reasons. From understanding that suicide is a sin, to wanting to earn money this way to solve the financial problems of a family. Trust such "bombs" independent execution of the attack can not be. Most often they are used in the dark. Radio-controlled bomb, which just need somewhere to deliver. As it was, for example, in St. Petersburg with the explosion in the subway.

Well, the most "exotic" terrorists. Rarely, but encountered. Psychopaths prone to sadomazochism. This category is visible even visually.

In general, if we look at the situation today, we can see a rather serious work of our special services in these areas. Starting from blocking extremist sites and ending with the control of people prone to terrorism. It is not necessary to invent anything new in this work. There are many ways to identify terrorists at any stage of an act’s preparation. The only problem is the instantaneous response to the emergence of new recruitment methods. But, judging by the results, this is done by quite qualified specialists.

Talking about complete security is stupid. But it is even more stupid to escalate fear among ordinary people. All these stuffings and messages “from unnamed sources” in the special services are designed for this. But to know the essence is necessary. Know to confront.

Ctrl Enter
Noticed oshЫbku Highlight text and press. Ctrl + Enter
We are
Results of the week. “Life without an army is the same as love in a rubber band: movement is, there is no progress”Results of the week. "He flew away, but promised to return!"
Military Reviewin Yandex News
Military Reviewin Google News
45 comments
Information
Dear reader, to leave comments on the publication, you must to register.