A matter of time: after Abu Kemal to Idlib close at hand

December 11 2017
7
Last week, government forces, with the support of allies, completed an operation to defeat the Islamic State group (organization banned in Russia). Now active hostilities are moving from the southeast of the province of Deir ez-Zor to areas where the SAR army has yet to clear the country of the remnants of radical militias. 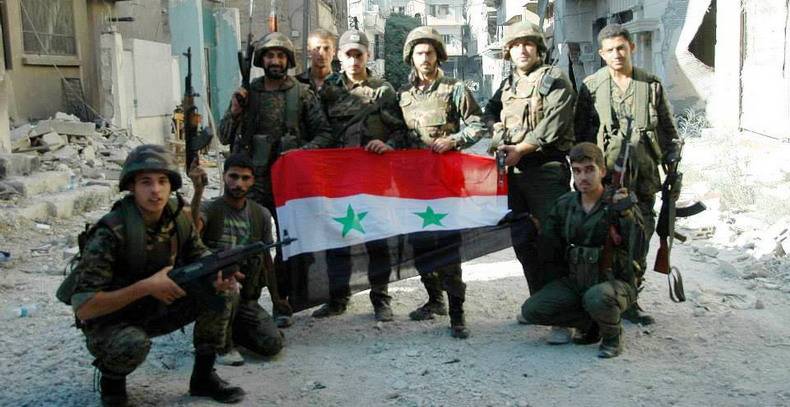 As is known, the last major focus of resistance of the militants remains the province of Idlib, controlled by the Islamist organization “Dzhebhat al-Nusra”. Military experts are unanimous in their opinion: in the near future, government troops have every opportunity to attack the positions of gangs in the area. The main subject for discussion among analysts now is the time needed by the army of the SAR and its allies to prepare and conduct a military operation in the area. Obviously, the answer to the question will depend on a number of factors.

ISIS Echoes
Having lost control over all key localities and infrastructure, minor gangs of the pseudo-caliphate remain in Syria and continue to create problems for government forces, civilian Syrians and, first of all, for colleagues from the Dzhebhat al-Nusra group. The fiercest clashes between militants of two terrorist organizations continue in the northeast province of Hama. Recall the shelling in the area does not stop with October 12.

The day before, as a result of an ISIS attack in the area of ​​the village of Rasm al-Ahmar, the losses of the Nusra terrorists amounted to 37 radicals, the number of igilovts killed was 23 people. 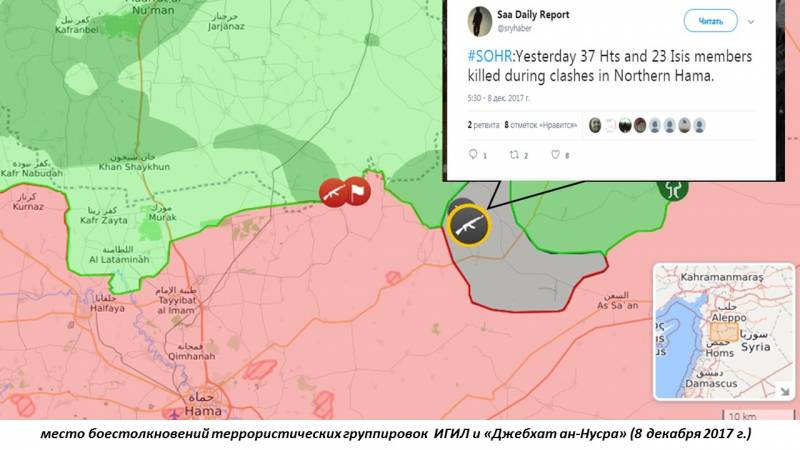 It should be noted that the activation of the surviving ISIL boilers attacking the positions of the Nusrovians is a positive factor: the defeated Igilovts, unwittingly, are fighting terrorism to a logical conclusion, causing serious damage to the military potential of Dzhebhat al-Nusra.

Government troops at low start
Tempered in the battles for Aleppo, Deir-ez-Zor, Meyadin and Abu-Kemal, the Syrian Arab army is now focusing on demining settlements on the west coast of the Euphrates and cleansing from the ISF gangs of the desert regions of Homs and Deir ez-Zor. Obviously, the “respite” taken is a matter of time, after which the government forces will continue to sweep the remaining boilers and fulfill their main task - the liberation of the last major terrorist stronghold in northern Syria.

In fact, much depends on the Syrian command, which is left with a decision on what to concentrate the main efforts in the near future: to free small boilers in the south-west of Syria or to take control of the idlib zone.

Influence of forces from outside
However, to say that everything depends on the leadership of the armed forces of the SAR today is hardly appropriate. We must not forget, in addition to the allies, the official Damascus has no less number of potential opponents and overt opponents.

Regarding the Idlib question, one of the main participants, on which the time needed to defeat the second major terrorist group by the Syrian army, will depend on Ankara. Repeated cases of non-compliance by the Turkish player of the reached Syria agreements indicate that in the case of intensification of hostilities, Turkey’s behavior may surprise with its unpredictability. Apparently, this circumstance is one of the restraining factors that warn the Syrian authorities from hasty decisions.

In addition, one should not disregard the behavior of the leaders of Western countries, who will not miss the opportunity to accuse the SAR army and allies of killing civilians after the situation in the west of Syria begins to rapidly change in the light of unfavorable for the West.