Results of the year 20 Army ZVO from the commander Peryazev 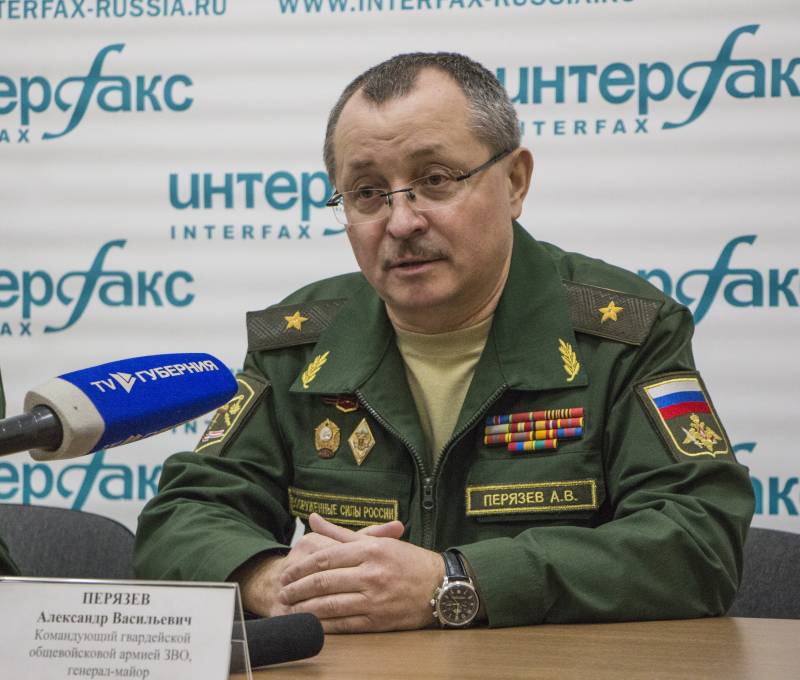 In general, briefings of this level are rare in our area. It is not from the press service of the Ministry of Defense, but directly from the location and work. Therefore, the invitation of the commander of the 20 army to listen to a report on the work done during the year was received with interest.

The commander of the 20-th Guards Combined-Arms Army, Major General Peryazev, did not speak for long, but in principle, his briefing was not so much devoted to what was as to what would be. What is even more interesting.

After all, the 20 Army is our shield on the border with a restless neighbor, who also considers himself at war with us.

The headquarters is located in the city of Voronezh, the formations, units of the army are deployed in 7 subjects of the Russian Federation, the army’s area of ​​responsibility is very large, from Smolensk to the Rostov region.

December 1 army units began a new school year, ending 2017-th. The year was very tense, as only in 2016, the connections were only formed. Formed military teams, officers' teams, set up a set of contract. Some parts were moved a long distance from their former locations.

There is an active construction and arrangement of military camps. We must pay tribute, the military camps this year are in the first stage - this is about 90 objects will be completed and handed over.

We prepared for this teaching, more than 60 various exercises were conducted. It must be said that for a number of tactical subdivisions the exercises were arranged absolutely suddenly and in new areas for the performance of combat missions, to which personnel took marches. Then they went by rail, to Luga and there they performed the assigned tasks.

The missile brigade, which is deployed in Kursk, has confirmed that it is excellent. The first, at the state proving ground in Ashuluk, was conducted on the “excellent” mark, the second test - shooting in Luga and also on the “excellent”.

I am pleased to announce that in 2018, the brigade will be fully upgraded to the Iskander complexes.

Next year, we are also planning serious measures to equip our anti-aircraft missile brigade. It switches to the most modern systems BUK-М3.

The electronic warfare brigade will also receive new complexes, for which we form another battalion in its composition, equipped with new complexes.

Again, in 2018, a planned replacement of existing equipment is planned. The army will receive new Tanks T-72B3 and the new BTR-82A.

This year we spent an alloy on the technique. In a short time, thanks to a clear interaction with the administration of the Voronezh region, we were given a stretch of coast. During the week we equipped it and after that the BMP and BTR went to the water.

It must be said that 10 was not there for years. For us it was also a science. Next year we plan to further develop the Pogonovo polygon and we want our tank crews in the area of ​​the Pogonovo polygon or in the area of ​​deployment Boguchar or Valuek to do the tank driving exercise under water. I know that our zone of responsibility is crossed by rivers, albeit small ones, but nevertheless, driver mechanics in our country must drive infantry fighting vehicles and armored personnel carriers on the right, and tanks under water.

The formation of the army was not completed. On December 1, we received an artillery brigade, which we really need and need. The brigade is now being manned in Kolomna.

The artillery brigade is primarily artillery systems that are capable of ensuring the operation of our motorized rifle subunits. Brigade divisions are equipped with both anti-tank weapons, and barrel ("Msta-S") and rocket artillery.

We have very good communications. We are practically at 90% staffed with modern equipment capable of providing control to the army commander on the whole front. Conveniently, as commander of an army stationed in such a huge area, I can talk to the commanders of the formations from Smolensk to Nizhny Novgorod or Boguchar, practically all over the western direction, via videoconference. There are no problems in this regard. Our development and joint training of unmanned aerial vehicles is going very well.

The army, in principle, ended the year with good performance. Literally in the month of November, army control officers and two units handed over physical training to the central organs. Army management and two units rated "good." This is also such a serious, normal indicator.

I would like to note that well we are improving the towns, as previously mentioned.

In Boguchar, from 10 objects almost all of them will be handed over this year. These are 8 barracks and two canteens. The town is provided with water, heat and light. Also additionally in Boguchar, there is a serious housing problem, the city is small, 7 apartment buildings for rent.

The objects were handed over here and in Klintsy of the Bryansk region - this is a new town, very beautiful, compact. This barracks and canteens. In the second turn park premises will be equipped.

Now there is a construction of a military camp in Elna. The modern town. At the end of this year, the town will also be ready for use.

We are actively conducting and equipping with modern equipment, and active development of infrastructure. And, most importantly, we now must not fall behind, and we will not lag behind in the development of the landfills, where the personnel will be engaged.

It cannot be said that everything goes as if in a parade, that is, without any problems. But we will try to be as open as possible to all who are interested in the processes taking place inside our army. Specifically - our 20-th Guards. In the first place, of course, this applies to those who will possibly serve in our units as an emergency service, or in the future will choose a service under the contract. And, of course, for relatives and friends.

Next year we will cooperate with all the media interested in showing all the processes that will occur with us.

From the Editor: We are very pleased to accept the invitation of Major General Alexander Vasilyevich Peryazev. On the pages of "Military Review" there will always be a place to cover the events of our army in general and the 20 army in particular.

Ctrl Enter
Noticed oshЫbku Highlight text and press. Ctrl + Enter
We are
Reports from the militia of New Russia for 27-28 September 2014 of the yearResults of the week. "Either true or all is well"
Military Reviewin Yandex News
Military Reviewin Google News
19 comments
Information
Dear reader, to leave comments on the publication, you must sign in.