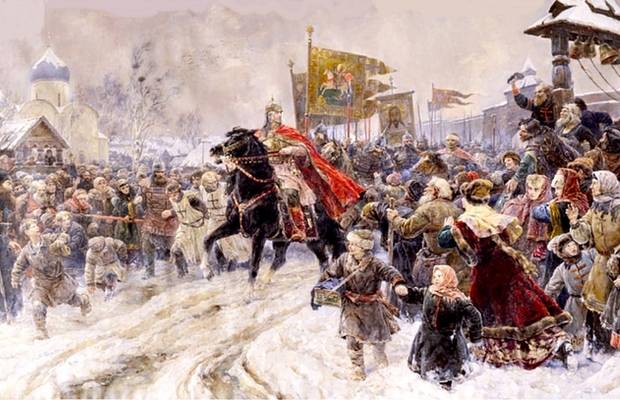 The outstanding commander, hero of the Battle of the Neva and the Battle of the Ice, Grand Duke Alexander Nevsky was a wise ruler and an experienced diplomat. The political path chosen by him did not allow Rus to disappear, and for many centuries determined the vector of development of our state.

Alexander Yaroslavich was born on May 13 of 1221 in Pereyaslavl-Zalessky. He was the direct heir of the great Kiev princes, Vladimir, the Baptist of Russia and Yaroslav the Wise, among his famous ancestors Yuri Dolgoruky and Vsevolod the Great Nest.

By the time of the beginning of the state activity of Alexander Nevsky, the position of Russia was disastrous. The invasion of the Mongol nomads in 1237-1238 caused enormous damage to the Russian lands. Cities and villages were ravaged, thousands of peasants and artisans were in full, trade relations between the cities ceased. The Mongols absorbed the eastern and southern neighbors of Russia - the Volga Bulgarians, Polovtsy, Pechenegs, Torks and Berendeys. A similar fate awaited the Russians.

To some extent, the former structures of princely power, with the inclusion of the Golden Horde, managed to save Alexander Yaroslavich’s father, Prince Yaroslav Vsevolodovich. After his death, his son Alexander had to continue this line. But besides the Mongol question, the prince had to solve the German question.

"The enmity of the German tribe with the Slavic belongs to such world historical "phenomena, according to the historian Nikolai Kostomarov," of which the beginning is inaccessible to research, because it is hiding in the darkness of prehistoric times. "

The Livonian Order, which had as its patron one of the most powerful rulers of Europe, the Pope of Rome, in the first half of the 13th century, launched an offensive against the Slavic lands. This offensive was not a simple attempt by one state to expand its territory at the expense of another, it was a real crusade in which knights from all over Europe participated, and which set as its goal the political, cultural and religious enslavement of North-Western Russia.

In addition to the Livonian Order, the Russian land was threatened by a young Lithuanian state and Sweden. Novgorod's reign of Alexander Yaroslavich fell on the period of serious foreign policy complications in the north-west of Russia. And the appearance of the prince on the historical scene already by his contemporaries was regarded as providential.

“Without the command of God, there would be no reign of his,” reports the chronicle.

The political intuition of the young prince prompted him to make the right decision, to refuse phantom help against the Mongols of the West, which Pope Innocent IV offered under certain conditions. It was obvious that treaties with the West could not lead to a positive result. At the beginning of the 13th century, European rulers revealed their true intentions when, instead of being liberated from the infidels of the Holy Land, in 1204, they seized Orthodox Constantinople.

Alexander will resist any attempts of the western neighbors to take advantage of the Mongol invasion and seize the Russian lands. In 1240, he will smash the Swedes on the Neva, and for this brilliant victory he will receive the name Nevsky, in 1241, Alexander Yaroslavich will dislodge the invaders from Koporye, in 1242 - from Pskov and defeat the Bishop's army and Dipta Bishop on the ice of Lake Peipsi.

As Kostomarov notes, Alexander Nevsky saved the Russians from the fate of the Baltic Slavs conquered by the Germans, and strengthened the north-western borders of Russia.

Having secured the western borders of Russia, Prince Alexander Yaroslavich set to work in the east. He traveled to the Horde four times to enlist the support of the khan. It was impossible to solve the Eastern question by military means, the forces of the nomads significantly outnumbered the Russians, therefore Alexander Yaroslavich chose a diplomatic way. 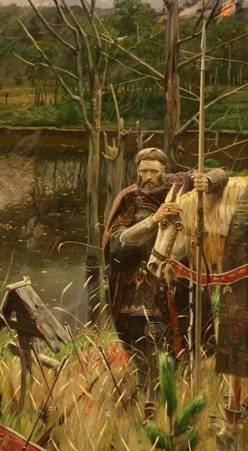 “By his prudent policy,” the historian Vladimir Pashuto wrote about Prince Alexander Nevsky, he saved Russia from the final destruction of nomads by rats. Armed struggle, trade policy, electoral diplomacy, he avoided new wars in the North and the West, a possible, but disastrous for Russia, alliance with the papacy and the rapprochement of the curia and the Crusaders with the Horde. He won the time by letting Russia get stronger and recover from the terrible ruin. ”

Alexander Nevsky's weighted policy protected Russian Orthodoxy from mutation - the union with Rome, allowed the Church to continue its mission in Russian lands and even beyond its borders. In 1261, even the Sarai diocese with the chair in Saray-Batu, the capital of the Golden Horde, was formed with the mediation of the Grand Duke .

According to the historian Georgy Vernadsky, thanks to the preserved Orthodoxy “as the moral and political power of the Russian people,” the emergence of the Russian kingdom was possible.

The Russian Orthodox Church, appreciating the life feat of the Grand Duke Alexander Nevsky, glorified him in the face of the saints.