Elusive. Whose spy was riding on the roof?

December 8 2017
43
Nothing to say - a rich life for a person. Then, in a moment of triumph, it bursts into the building of the Georgian parliament and drinks someone else's tea. Then in the bitter hours of defeat relieves stress, biting his own tie. 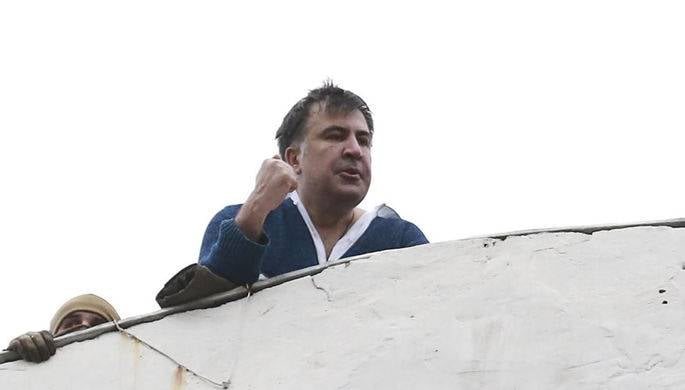 New triumph - on Ukroevromidan and after it. It seemed that two war criminals - a Ukrainian bloody pastry chef and a Georgian tie-eater - now, like inseparable twin brothers. But something went wrong. He quarreled with his former colleagues on the Maidan: “Bebebe, nobody has ever spoken to me like that.". And in the biography of our "hero" a new defeat - he is being deprived of the citizenship of Ukraine.

And now - take off again. Almost literally. Directly to the roof of the eight-story building ... True, it turned out he had a cold there, poor thing. Because of this, he did not even appear at the “popular assembly” announced by him. Not that lies somewhere with the temperature, not that - storming Kiev hotel in order to wash. “They are looking for firefighters, looking for the police” ...

5 December, standing on the roof and threatening to rush down, Saakashvili claimed that he was arrested by “traitors to Ukraine, agents of Moscow”. However, he did not rush and even allowed the “hand of Moscow” to handcuff himself. Only one of his fanatical supporters tried to burn himself.

But the “prisoner” did not have to wear handcuffs for a long time - the crowd pictured Mishiko freed from custody, and he began to shake these very “bracelets”, threatening to chain Poroshenko into them.

The absurdity of the situation is that Saakashvili himself is accused of the very same thing in which he accused those who came to arrest him. Namely - in the ministry of Russia. According to the Prosecutor General of Ukraine Yuriy Lutsenko, the former Georgian president was preparing the "Russian winter" in Kiev, which was planned by the FSB itself.

«I want to express my great gratitude to the staff of the Security Service of Ukraine and the General Prosecutor's Office, who allowed us to prevent this first stage of the planned Russian Federal Security Service's “Russian Winter” plan in Kiev", - said Lutsenko in the Verkhovna Rada.

Specifically, Mr. Saakashvili is accused of having links with businessman Sergey Kurchenko, who was close to Yanukovych, and then fled from Ukraine. Allegedly, he finances "mikhomaydan" with the filing of Russia. Lutsenko presented something like evidence to the deputies - an audio recording of a telephone conversation between Saakashvili and Kurchenko. A runaway Georgian politician called this audio recording a fake.

However, Lutsenko also cannot claim by 100% that his accusations are true. According to him, he has no evidence that Kurchenko supported "mikhomaydan" on the orders of Moscow. But, he made the assumption, the businessman uses “communications in the offices of Russia's top leadership” and “has business in the temporarily occupied territories of Ukraine” (that is, in the territories freed from the rule of Kiev temporary workers-maydanschikov).

The situation around Saakashvili divided those who once in the same team rode on “euromaidan”. Thus, Zoryan Shkiryak, adviser to the head of the Ministry of Internal Affairs of Ukraine, spoke out quite harshly: he called the ex-leader of Georgia a coward and “stabbed” on the topic that he did not dare to jump from the roof. He also called for Saakashvili to be sent home, “to prove his innocence in court.”

Another well-known "maydanschik", Oleg Lyashko, expressed the opinion that Saakashvili would collaborate with Poroshenko, and everything that happens resembles a "cartoon about Carlson." "Instead of ... solving the problems of improving the welfare of the Ukrainians, considering the budget, looking for options to support the national producer, we are talking about a Georgian guest performer who jumps over the rooftops like a mental hospital.", - said Lyashko in the Verkhovna Rada.

Finally, the pseudo-president of Ukraine, Petro Poroshenko, with his own mouth, said that Moscow is paying Mikhail Saakashvili for destabilizing the situation in Ukraine.

On the other hand, Yulia Tymoshenko fiercely protects the lover of ties and roofs. She stated: "No one has the right to carry out mass repressions in front of the whole world and carry out reprisals against the ex-president of Georgia, Mikhail Saakashvili. This is a political terror, which became the face of Ukraine».

If even the famous “orange princess” with the same pathos defended those who are really pursued by the Ukrainian authorities, who are languishing in the dungeons of the SBU, the price would not be this pathos! But those who were really arrested, will not wait for a word in his defense. They have no ... roof. But not the one that Saakashvili was riding, and the other ...

For the “Georgian Carlson” is not on the roof, but under the roof. If we even talk about the fact that he is someone's agent, then behind him is not Russia.

US State Department spokesman Heather Nauert after the acclaimed stories with an unsuccessful jump, she hastened to make a statement: “We call on the Ukrainian authorities to de-escalate the situation ... We call on all parties to avoid violence and follow the rule of law, international obligations". She added that if someone is arrested in Kiev, - "it must be in accordance with the laws and regulations of this country».

Again, none of those who are already in prison on charges of pro-Russian position, did not bother with such high protection - neither from Yulia’s mouth, nor from a lady from overseas.

But the opinion of one of the former associates of Saakashvili, Nino Burjanadze. It was she who was with him when he came to power in Georgia when he broke into parliament and grabbed a glass of tea that belonged to Eduard Shevardnadze. And she later completely disillusioned with the former "leader." "Now behind him are the oligarchs, who in Ukraine want certain changes. But on the other hand, Saakashvili hopes for the forces behind the campaigns against Russia ... I believe that all this fits into that program, or the project that has been carried out in Ukraine for a long time", - Burjanadze said on the air of the radio Sputnik.

And then there is the newspaper "Moskovsky Komsomolets" reported, citing a source on the sidelines of the Verkhovna Rada. According to "MK", ​​at that moment, when there was a confrontation around the arrest of Mishiko, "a senior American called one of the top leaders of Ukraine - either from the State Department, or on behalf of someone from the Donald Trump administration. ” It was this call, and not the crowd at all, that allowed Saakashvili to be released..

Well, it is quite logical. You can disperse the crowd if you wish, but you can’t overclock the real owners of the Kiev regime ... That's why Saakashvili is so elusive in a situation where those who are considered agents of Russia are quickly and quietly arrested and even removed.

Actually, Poroshenko understands whose agent is the one who rode on the roof, attracting everyone's attention. It is only about who there, in the end, prefer. The fate of the used and thrown into the garbage can ...

Ctrl Enter
Noticed oshЫbku Highlight text and press. Ctrl + Enter
We are
Reports from the militia of New Russia for 17 September 2014 of the yearResults of the week. "Well, do not change me because of every idiot!"
Military Reviewin Yandex News
Military Reviewin Google News
43 comments
Information
Dear reader, to leave comments on the publication, you must to register.