May I go out? How Brexit turned into a “couple of problems”

December 7 2017
5
The Prime Minister of Great Britain Theresa May met with the President of the European Commission Mr. Juncker and the President of the European Council Mr. Tusk. The most important thing at the meeting was the issue of the price of Euro-divorce. The amount reached fifty billion euros. Nor was the question of Northern Ireland resolved. Without agreeing with the gentlemen about anything, Madame May announced with a sigh about a “pair of problems”. Are there really only two problems? After all, somewhere in the UK already smacks of revolution! 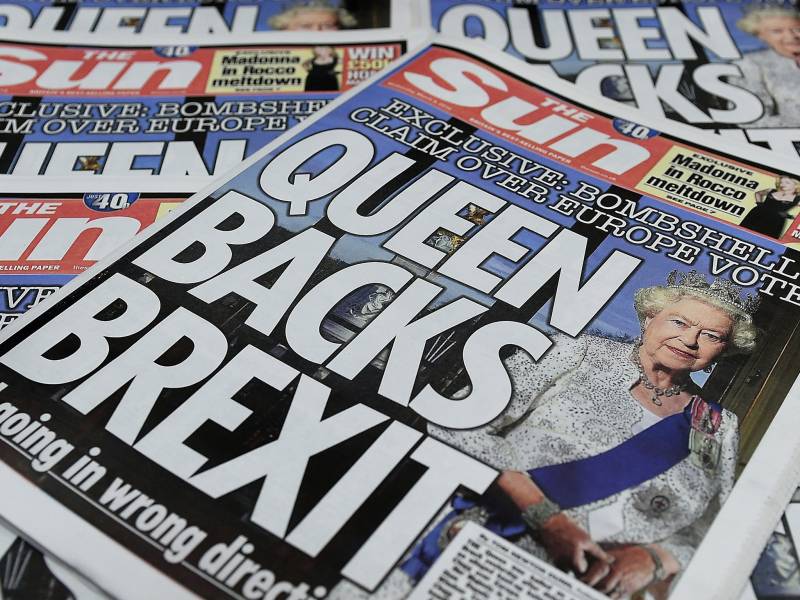 In the “divorce case” of the EU and the UK, the amount of “compensation” reached fifty billion euros. Nor is the dangerous question of Northern Ireland resolved - maybe blood is shed. In Scotland, revolution is brewing in general. And for Theresa May, this is just a “couple of problems”?

A couple of these political talkers, May and Juncker, as is common with politicians after empty meetings and wiping their pants and skirts, alternately rose from their chairs and announced progress in negotiations, significant progress in resolving issues, bringing positions closer, striving for agreement and expressed hope on the positive completion of the negotiations.

In fact, the parties did not come to any decision and remained just as far from a compromise on all major issues as before. And even the scheduled press conference was canceled. Instead, May and Junker limited themselves to short statements. A couple of statements.

The Brexit talks have reached an absolute dead end. The parties did not reach agreement on the main issues: the amount of compensation for the “divorce” and the degree of “openness” of the UK-Ireland border. On the contrary, all the contradictions sharpened.

With a sigh, Teresa May recognized the "problems." And this is really her problem. Her and Britain. Not the European Union, which looks down on the unauthorized exile down.

There is nothing surprising: in addition to the huge compensation that the UK owes the EU, Ireland intervened.

The fact is that the border of Northern Ireland and the Republic of Ireland is the only land border of the United Kingdom. And now Ireland has put a condition to Great Britain: to continue negotiations on the “divorce”, London is obliged to provide guarantees of preserving the maximum open border. This was stated by Irish Prime Minister Leo Varadkar.

“The UK must offer trustworthy, concrete and working solutions that ensure that a real border does not appear, whatever the results of the negotiations and whatever the future relationship between the UK and the EU,” Varadkar quotes RIA News".

Mr. Varadkar stressed that what Britain is now offering does not suit him, and he will firmly defend the interests of his country. “We do not have much time, but I think that with a good level of cooperation and the necessary political will, we can reach an agreement on how to move forward,” he said.

Obviously, Varadkar publicly exposed London. So far in London, it has been asserted that the negotiations on the border issue are proceeding successfully. New statements by the Irish side have shown that this is far from the case.

Vice Prime Minister of Ireland Simon Kovini clarified something. According to him, Ireland does not intend to postpone Brexit at all, but the UK is not doing enough to resolve the issue of the Irish border.

Mr Kovini said that the UK position does not take into account local peculiarities. "The whole island is extremely sensitive to this issue and is subject to potentially bad impacts from Brexit", - quotes him theuk.one.

The "ex" entered into the dispute. The loudest was the voice of the former Prime Minister of the United Kingdom, Tony Blair.

In his opinion, Britain’s withdrawal from the EU threatens the “Good Friday Agreement”, through which the longstanding conflict in Northern Ireland was resolved.

The prospect of introducing a “hard border” after Brexit creates real problems for the peace process. “If in the end there will be a hard border, then, obviously, this will provoke tension. This does not mean that you have to abandon the "Good Friday Agreement", but it creates a real threat to him, "says Blair TASS.

The “Good Friday Agreement” was concluded in 1998 and provided for the transfer of power in the region by London to the local self-government bodies created on the basis of the coalition. The agreement established a relative equilibrium in Northern Ireland and put an end to clashes to opposing sides - opponents and supporters of independence from Great Britain.

The complex Irish question was one of those “problems” that Teresa May had in mind. However, she did not bother with details.

May said that Britain and the European Union still have a “pair of problems” over which differences remain, but they can be overcome in the near future. “We still have differences over a couple of problems, we need additional negotiations and consultations. But we will meet before the end of the week, and I am confident that the negotiations will end positively, ”the British prime minister said. Rosbalt.

In turn, European Commission President Jean-Claude Juncker noted the “common understanding” and said that the parties “significantly brought together” the position “thanks to the Prime Minister of Britain and the readiness of the European Commission to reach a fair agreement”. Juncker counts on the successful completion of negotiations before the EU summit (14 and 15 will be held in December).

Mae's office refused to explain the words of the boss about the “pair of problems”.

“We do not comment on this issue,” said RIA News" representative of the office of the Prime Minister.

The political situation in London is heating up.

Proponents of a tough Brexit scenario demanded that May withdraw from the negotiation process: first, let the European Union accept the seven principal points of the UK. The letter to the Prime Minister was signed by former Cabinet members Owen Paterson, Nigel Lawson and John Redwood. In total, 30 names appear in the document. These people want Theresa May to stop the free movement of people across the border for a transitional period. In addition, the European Court must lose jurisdiction in the UK on the day the state leaves the European Union. Finally, during the transition period, the UK should be able to enter into new trade agreements.

“If the EU refuses to fulfill our requirements by the end of December, then the UK, having exhausted all other ways, should cease its participation in the negotiation process and inform the European Union that before they prepare for a serious conversation about a future trade agreement, we will move to the conditions of the World Trade organizations, starting with 30 March 2019 of the year ", - quotes the document theuk.one.

The current government is in the role of a loser. In fact, we note that it has already given way to double pressure: external - EU and internal - Ireland.

The British press writes that Theresa May agreed to the “normative harmonization” of an independent Ireland and Northern Ireland, which is a part of Britain.

These are Northern Ireland unionists (the Democratic Unionist Party, DUP), who are unlikely to risk fully endorsing a UK-EU agreement that would keep Northern Ireland in a European trade and regulatory regime. The DUP rivals from the Ulster Unionist Party (UUP) have already accused the DUP of being "corrupt". Robin Swann, the leader of the Ulster union, said that if the draft document becomes a real deal, it "will cause serious problems for the economic, constitutional and political integrity of the United Kingdom."

London is also seething. Boris Johnson, Michael Gove and other leading Euroskeptics will lose their peace if the United Kingdom in the transition period falls under the current EU rules. This is for them the “worst case scenario”; This means that the UK does not seem to leave the EU.

The most offensive reaction came from the right flank, from Nigel Faraj, the former leader of the United Kingdom Independence Party (UKIP). He said the "bitterness of betrayal of 17,4 million people." The rebate has gone too far.

The reaction came from Scotland. They talk about revolution.

The first minister of Scotland, Nicola Sturgeon, suggests that her government may be on the verge of a “revolutionary situation” because of Brexit, because the case of Scotland with special access to the EU single market is “indisputable”.

The Scottish first minister still believes that Theresa May’s position “is about to collapse under the weight of contradictions.” If Northern Ireland is allowed to remain in close contact with the rules of the EU single market to protect trade with Ireland, then why not do so in Scotland?

By the way, we note that the new Survation survey showed support for Britain's independence from the EU at the 47% level. This is the highest indicator, bearing in mind all recent polls conducted after the referendum. Thus, about half of the British are not at all opposed to leaving the EU, and the mood has not changed in general. The whole question is only in the conditions.

But it is difficult to imagine that Britain withdraw from the EU on its own terms. Obviously, the country is waiting for a big political fever. Yes, and economic, too. One without the other does not happen.

Observed and commented on Oleg Chuvakin
- especially for topwar.ru
Ctrl Enter
Noticed oshЫbku Highlight text and press. Ctrl + Enter
We are
Old ambitions returned to Britain with a claim to a new world center of powerBrexit went to go: in the European Union are ready to leave Britain in their arms
Military Reviewin Yandex News
Military Reviewin Google News
5 comments
Information
Dear reader, to leave comments on the publication, you must to register.