For "Pratt & Whitney" in all shoulder blades 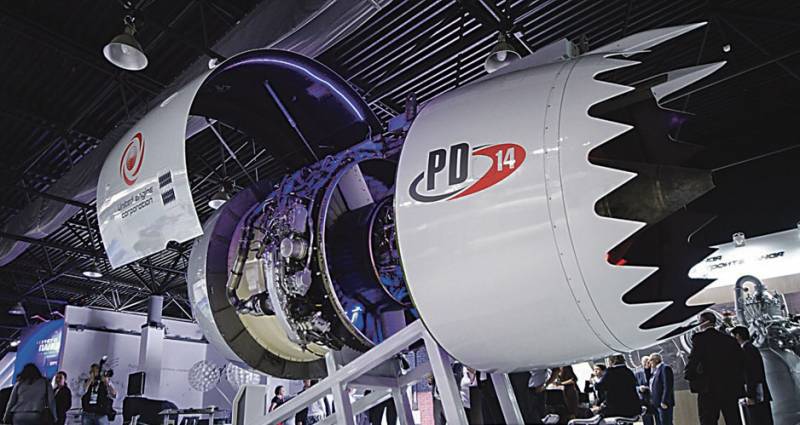 The development and production of the PD-14 aircraft engine is one of the most important and discussed projects on a national scale. Increased attention to this motor specialists, officials, the media, the public and foreign experts is understandable. After many years of post-perestroika coma, the domestic industry has finally found the strength and opportunity to take on the creation of a fifth generation aircraft engine. And most importantly, PD-14 is not developed by itself, but in conjunction with the medium-haul airliner MC-21.

Great hopes are placed on this aircraft as a means of resuscitating the civilian segment of the domestic aviation industry and renewing the fleet of domestic carriers. In addition, according to the designers and officials, MC-21 has a good export potential.

But that's not all. When people talk about PD-14 and its prospects, they always note that it is planned to create a family of power units with a load from 9 to 18 tons, adapted to the requirements of specific customers, on the basis of the engine gas generator. The scope of application of such engines - short-and medium-haul passenger and transport aircraft. Due to the use of an already developed gas generator, the timeframes for creating new power plants should be significantly reduced.

In numerous media reports, work on the creation of the engine looks quite successful. But what is the real state of affairs? Flight tests MC-21 (to be more precise, MC-21-300) began in May. But the plane does not fly with the PD-14 engine, but with its American counterpart, more precisely, its competitor - PW1400G. With an imported engine, the aircraft will go through the entire flight test cycle, and airlines will buy it with it. And where is our PD-14?

Representatives of the press service of JSC "United Engine Corporation" reported that the JDC, based on the certification basis, is testing PD-14. Works are carried out strictly in accordance with the schedules. During 2015 – 2017, the first and second stages of engine flight tests took place at the IL-76LL flying laboratory. According to their results, the working capacity of PD-14 and its systems was confirmed in conditions close to operational ones. The third stage is scheduled to begin at the end of the year: the range of checking engine operation will be expanded.

Special ground tests are also conducted. “We are at the stage of certification engine PD-14. The results of the work performed are accepted by the certifying authority. The procedure is carried out in accordance with established deadlines both in accordance with Russian and international standards. In 2018, it is planned to receive the Rosaviation certificate, and in 2019, the EASA (European Aviation Safety Agency) is expected, ”said the JDC. However, we note that in private conversations, responsible officials confidently declare receiving a Russian certificate next year, but they are extremely cautious in assessing the possibilities to acquire a similar European document. It seems that the process can be delayed again.

In general, the current dates are markedly different from those that were announced at the initial stage of engine development. Then they hoped to complete certification in 2015, in the 2016, to begin mass production. It must be said that the terms of construction and testing of MS-21 also “swam” strongly. The liner was supposed to take off in 2013 year, but, as usual, for numerous technical and financial reasons, the process of creating the machine was delayed. Today, experts and officials claim that the Russian certificate of airworthiness MC-21-300 will receive in 2019-m, and international - in 2020 year. 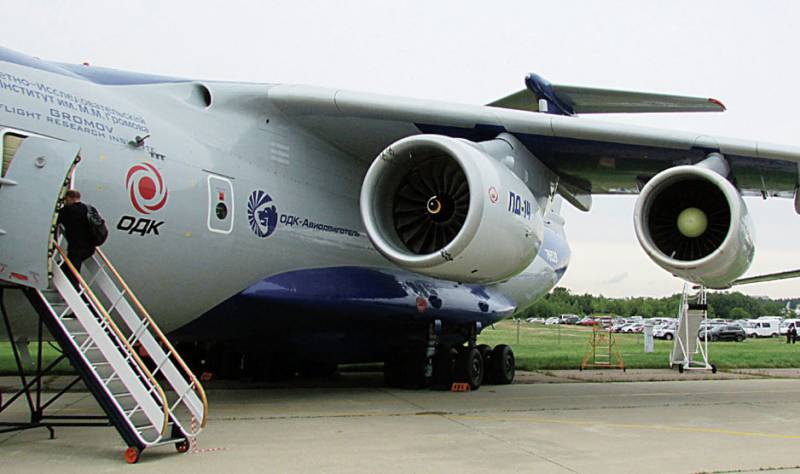 At first glance, the timing of aircraft and engine certification is well correlated. But there are other facts as well. The PD-14 engine is planned to be installed on the first or second flight models of the MS-21-300 only in 2019, respectively, tests in the sky will begin closer to 2020. Prospects for completing serial cars with domestic motors look even more vague. This summer, at MAKS, Ilyushin Finance signed a contract with Red Wings to lease 16 MC-21-300s. At the same time, four aircraft will be equipped with PD-14 engines, the rest will be equipped with PW1400G engines. As for the key domestic customer, Aeroflot, according to the available information, the company will receive all of its MC-21s (today we are talking about 50 vehicles) with Pratt & Whitney engines. However, the Irkut corporation intends to equip half of the MC-21 from the first batch of 630 aircraft with domestic engines. In the future, the decision on the choice of engine will be made exclusively by the customer. Will the corporation's plans come true - time will tell. So far, there are 175 firm orders, and including options and signed memorandums - 315.

Engine builders have the time to complete the necessary tests and prepare for mass production. And it seems there is no need to hurry. Only in November 2017, TsAGI tested MC-21-300 models in conjunction with PD-14 engines. Purges were performed in a transonic tube with simulation of takeoff and landing modes. Studies, as reported in the press release TsAGI, allowed to replenish the aerodynamic data bank of the aircraft. And in the summer of 2017, the ODK conducted qualification tests of an integrated electronic-hydromechanical automatic engine control system PD-14.

As for mass production, in its 2017 – 2025 equipment it is going to spend 21,9 a billion rubles for its preparation and modernization of equipment. We know the intention to create a dedicated assembly plant for the fifth generation engine. Line capacity will be at least 50 sets per year.

There are no special doubts that the UEC will produce the necessary number of engines. But the legitimate interest is the question: do the characteristics of PD-14 correspond to the stated parameters and can the domestic motor compete with the American one? History Our engine building industry is replete with examples when Soviet products lagged behind their foreign counterparts in a number of key parameters. Let us recall at least the M-4 and M-50 aircraft. The first was not able to reach the specified range, but was adopted for service. And what to do - we did not have another, more suitable engine then. The second bomber went to flight tests at all with the engines for which it was designed. The desired engine did not take place, and M-50 did not go into the series. The epic with the fine tuning of the engines on the MiG-29 was quite dramatic. The list can be continued. Almost all Soviet aircraft, having tactical flight characteristics comparable to those of the United States and Western Europe, were inferior to them in one thing - in the range and duration of the flight. The reason is higher fuel consumption.

So what about our PD-14? Can it compete with the Pratt & Whitney product on equal terms? If we turn to official open sources, we will see that the main characteristics of PD-14 and PW1400G, such as take-off thrust, dimensions, weight, specific fuel consumption, reliability, noise level, are almost identical. Only experts know what kind of thrust the engines actually develop and how much fuel they burn.

Of course, PD-14 is a modern fifth generation engine. The press service of the UEC stresses that it has a proven and modern design, a compact two-shaft scheme, a direct fan drive, an optimal degree of bypass, an efficient gas generator. In addition, there is a digital ACS with full responsibility of the FADEC type (Full Authority Digital Engine Control system, an automated control system for the parameters of fuel injection, air and ignition in the engine to maintain optimal performance with minimal consumption). All this allows to achieve high reliability and manufacturability, reduce costs. The modular design together with the digital ACS and the built-in diagnostic system ensure the successful application of the concept of engine operation according to the technical condition.

Still have a chance?

In the UEC note that in the design and creation of PD-14, a large number of innovative and advanced technologies were developed and applied, which made it possible to achieve the desired characteristics. In particular, the fan is equipped with wide chord hollow titanium blades. The high-pressure compressor bliski on the first, second and fifth stages are made of titanium alloy, the disks of the sixth - eighth stages - of a new generation of nickel granule alloy. The parts of the combustion chamber are made of a heat-resistant intermetallic alloy, and it itself has low-emission combustion, nozzles with pneumatic spraying are installed, and a second-generation ceramic heat shield is used. The working and nozzle vanes of the high-pressure turbine are made of the newest single-crystal alloys, protected by a ceramic heat-shielding coating, and the disks are made of a new generation of nickel alloy. The working and nozzle blades of the first to sixth stages of the low-pressure turbine are hollow, and active clearance control is applied.

All elements and modules of the gas-air duct are developed using the methods of three-dimensional aerodynamic design. In the design of the engine nacelle composite materials occupy approximately 65 percent by weight. It is also equipped with a lattice reversing device with an electromechanical drive.

But this amount of innovation carries with it a potential danger. After all, the more innovations, the more difficult the product will be in production, it means more expensive. And besides, even small deviations from technology in the manufacture of individual parts in the amount will lead to a noticeable decrease in performance.

We should not forget that PD-14 and PW1400G were designed and produced in different conditions. In 90-s and at least in the first half of zero years, the domestic industry survived. Almost all complex production facilities stopped, many enterprises went bankrupt, qualified personnel fled in search of a better life, the intellectual potential of design bureaus and scientific research institutes plummeted, a huge number of technologies were lost, engineering specialties stopped being in demand. Some plants are reoriented to the production of any nonsense such as hardware or metal doors. Others have become shopping or business centers. It is obvious that after almost two decades of industrial degradation, creating a high-tech product capable of competing with one of the trendsetters is almost impossible task. There are not enough qualified personnel, the school is lost, there is no modern equipment. By the way, the machine tool industry has suffered, perhaps more than others. Technologically, the United States and Western Europe are almost always ahead of our country. And for the post-perestroika period, the gap has only increased. Therefore, with a high degree of probability, it can be assumed that the characteristics of PD-14 do not correspond to the declared values ​​and are inferior to PW1400G.

Of course, over time, our engine will be brought to the desired level. But competitors are not asleep. They will find ways to improve the performance of their products. Although even in such a seemingly losing situation, it is necessary to make the domestic engine. First of all, in order to revive the school, science, personnel, production, create a reserve for future developments. For PD-14 and its modifications will always be used. One of the potential consumers is the projected medium military transport aircraft under the unofficial name IL-276. As the chief designer of Il, Nikolai Talikov, noted, today, the well-proven PS-90А-76, which have the necessary characteristics to reduce technical risks, are considered to be the propulsion system. At the same time, the company is waiting for PD-14, which should reduce fuel consumption and maintenance costs of the power plant. After confirming the stated characteristics and testing in serial production, IL is ready to replace PS-90А-76.

Ctrl Enter
Noticed oshЫbku Highlight text and press. Ctrl + Enter
We are
About Stalin and KhrushchevWhat you didn't want to know about England
Military Reviewin Yandex News
Military Reviewin Google News
64 comments
Information
Dear reader, to leave comments on the publication, you must to register.