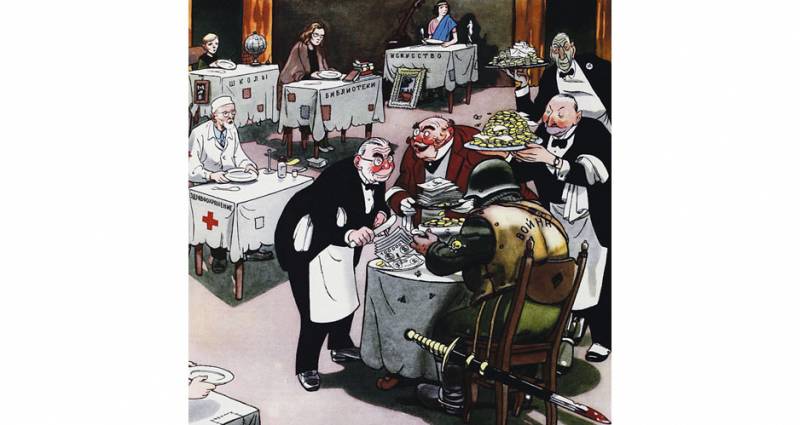 During the Cold War, it sounded: “He may be a son of a bitch, but this is our son of a bitch” *. As the analysis shows, the United States by military means assists dictators of the whole world, calling it “promoting democracy”, and then it sanctimoniously wonders why everything goes from bad to worse.

For most of its stories The US authorities constantly explained or justified interference in the internal affairs of other states by the fact that their military interventions throughout the world were Jacob, aimed at "promoting democracy" and "destroying evil dictatorial regimes." And although the use of these phrases over the years was hardly exhausted, the establishment was forced to admit that efforts to promote democracy did not bear the desired fruits.

For example, the Foreign Policy magazine published the article “Why is America so unlucky in promoting democracy in other countries?” (Http://foreignpolicy.com/2016/04/25/why-is-america-so-bad-at-promoting -d ...). In it, Harvard professor Stephen M. Walt notes that US efforts to promote democracy abroad for the most part ended in failure, and about a quarter of democratic states over the past 30 years have “degraded”. And while failing to spread democracy, Walt blames the “dark history of military intervention”, another, more recent analysis (https: //medium.com/@richwhitney/us-provides-military-assistance-to-73-pe ...) shows that the real reason for this disturbing tendency is not that democracy was promoted “by the wrong way”, but that it was never promoted at all.

Rich Whitney, a lawyer and writer, compared the rating system of Freedom House (https://freedomhouse.org/report/freedom-world-2016/methodology) with regard to political rights with the list of countries that the US authorities are assisting in military training (https://2009-2017.state.gov/t/pm/rls/rpt/fmtrpt/2016/index.htm), military aid (https://2009-2017.state.gov/documents/organization /252735.pdf) and arms sales (http: //www.dsca.mil/sites/default/files/fiscal_year_series _-_ 30_septembe ...). As stated by Whitney, the goal was to determine whether the US authorities, as is widely stated, are globally opposing dictatorial regimes and fighting for democracy. His independent analysis shows that the actions of the United States are in fact the opposite of intentions. Washington provides 36 military assistance to the "officially registered" dictatorial regimes from 49. In other words, more than 73 percent of the dictatorial regimes of the world are currently receiving military assistance from the United States.

For analysis, Whitney applied the generally accepted definition of a dictatorial regime: “A system of power in which one person or a small group has absolute power in the state, thus controlling all government policies and basic processes, which leaves the people powerless and unable to change these decisions or who is in power, in any way other than a revolution or a coup d’état. ” He chose the annual reports of Freedom House on the State of Freedom in the World, finding it the best source providing a complete list of dictatorial regimes and “free” societies. Whitney, however, notes that an organization claiming to be “independent,” has “a certain bias in favor of the interests of the class ruling in the United States.”

Freedom House's bias makes Rich Whitney's analysis generally murderous. The organization is funded (https://freedomhouse.org/content/freedom-house-annual-reports) by a combination of Western government and non-government sources, including the George Soros Open Society Foundation. Thus, the systematization by this organization of different states into “dictatorial regimes” and “open societies” is similar to the way the US Department of State classifies them. This is understandable, because it is known that the State Department is actually providing these dictatorial regimes with monetary support in violation of all oaths of loyalty to the promotion of democracy abroad.

But in addition, there are other definitely undemocratic states that receive huge military assistance from the United States and are not included in the reports of Freedom House as “dictatorial” and are thus excluded from the analysis of Rich Whitney. For example, Israel receives assistance in excess of 10 million dollars a day (http://ifamericaknew.org/stat/usaid.html), despite the fact that all Palestinians living within the borders of this state are deprived of civil rights and in conditions of concentration camps or military occupation regime.

And although this analysis of the own data of state authorities and the pro-Western "research" organization demonstrates US support for dictatorial regimes around the world, such revelations are unlikely to change anything in the US behavior in terms of long-term perspectives. For the USA to support dictators is, of course, not something new or unusual. Many dictators of the Cold War, no matter how despotic they were, especially in Latin America and Asia, were brought to power with the full support of the US authorities to allow the United States to "restrain" communism and Soviet influence.

So the "promotion of democracy" never pursued the stated goals. They could always disguise the imperial conquest of those countries that refused to obey the demands of the US authorities. For this reason, the well-known military interventions of the last decades - especially in Afghanistan, Iraq and Libya - were sold to the American public under the sign of the need to “restore” democracy and “wrest control from evil dictators”. This version is still used to justify operations of “regime change” in foreign countries, and despite the fact that the USA’s own image as the “most democratic country in the world” has long been torn to shreds.

* The phrase is attributed to US President Roosevelt, with whom he allegedly demonstrated his attitude towards the Nicaraguan dictator A. Somose (1896 – 1956), who fought fiercely with the Communists. Later, the same phrase was attributed to numerous US administrations that defended the interests of "friendly regimes" in other countries.

Ctrl Enter
Noticed oshЫbku Highlight text and press. Ctrl + Enter
We are
A great interview with Sergey Lavrov: about Ukraine, Obama and IranWhat you didn't want to know about England
Military Reviewin Yandex News
Military Reviewin Google News
7 comments
Information
Dear reader, to leave comments on the publication, you must to register.