December 9 2017
16
During the Northern War, there were no international organizations such as the Red Cross, but neither the Russian tsar nor the Swedish king forgot about their loyal subjects, and on both sides there were officials whose task was to travel to the enemy for mutual settlement of the issues of soldiers also civilians, by the will of the fate turned out to be prisoners of war: funds were allocated, issues of residence, provision of medical care to the wounded were specified. They even tried to make an equivalent mass exchange, but, unfortunately, it remained at the level of diplomatic correspondence. 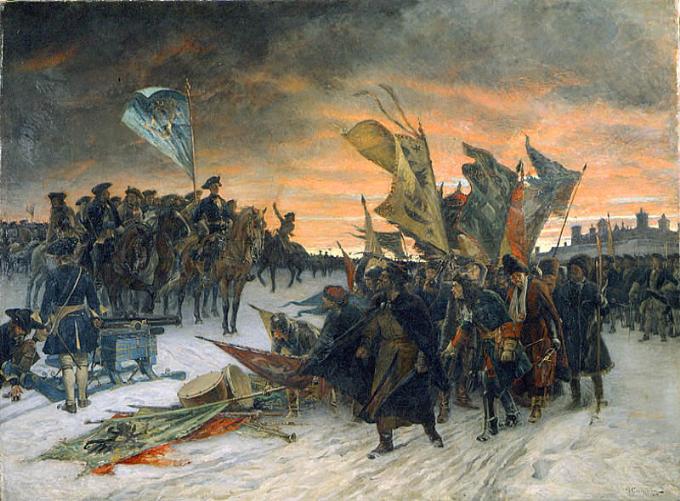 Before 1709, Moscow, the Moscow region and other cities of Central Russia coped well with the reception of captive Caroliners, but when the Russian victories at Lesnaya and Poltava thundered, the flow increased significantly, and the question arose: where to go next? Well, then there were Kazan, the Urals, well, and what kind of Russia is this, but without Siberia? Some of the Swedes were lucky: those who joined the army, having a civil specialty, managed to get settled quite well, and no one was going to resettle them from the former capital and central regions. They were engaged in crafts, for example, military doctors (healers) conducted medical practice, some officers were even able to get into the civil service, worked in Russian enterprises or opened their shops. However, there were those in the Swedish army who, except for how to fight, could not do anything else, and moreover, considered it beneath their dignity (especially the officers) to do something else. This category depended entirely on the financial support that His Majesty King Carl sent them, and the funds were received late, irregularly, and the Russians had to feed the Swedes at their own expense. The trouble is that the Russian tsar was still a fair man in this matter, and when, for example, in 1707, he learned that Russian prisoners of war in Sweden live in worse conditions than the Swedes in Russia, he ordered that we stop treasury on caroliners.

After 1710, the Swedes from central Russia began to be sent to the Urals and Siberia, i.e., if previously all this was done in limited quantities, then with the increase in the number of prisoners it was decided, including with their help, to master this complex region of our empire, which turned out to be not at all ready for this turn of events. As a result, some of the former Vikings were lucky, they ended up in the then major cities like Tomsk or Tyumen, and some were not lucky on a large scale, and he came to Irkutsk and Yakutsk or in the area adjacent to them. On the other hand, there were some advantages in being in Siberia: the local authorities there did not practice permanent security (for where are you, my dear, getting away from here?), And there was some freedom of movement. In the same places in Siberia and in the Urals, where security was practiced, this function was performed by civilians (well, you know, where in Siberia at that time we could recruit so many of our servicemen). Of course, there were local clashes with “aliens”, but this was not systematic, and was immediately stopped by the available forces. In my opinion, it was better to be in the distant regions of immense Russia than on the construction of, for example, the city of St. Petersburg, because the conditions of their maintenance differed little from those in which simple Russian men lived, also sent to build a new capital of a future empire .

Captured to the Swedes left the right to correspond with relatives, but in the order of military censorship all correspondence was viewed. However, in the XVIII century, with literacy, people were not all right, and the kingdom of Sweden was no exception. Also, no one is forbidden to imprisoned Swedes in Russia to profess their Lutheran faith, but, naturally, without proselytism.

There were also cases of interfaith marriages, while prisoners of war did not need to convert to Orthodoxy in order to marry a Russian woman. Initially, it was just a tacit approval / indifference of the authorities, but over time this developed into a regulated relationship. Another thing is that the transition from Lutheranism to Orthodoxy canceled the status of a prisoner of war, and Caroliner, who took such a step, greatly eased his position in Russia, but could not return home, for he became a loyal subject of the Russian tsar. Most often, the faith was also changed in connection with the transition to the Russian service, since the huge country needed a lot of competent specialists (and the Swedes were noted not only in military affairs and small crafts, but also in trade and mining), and the government did not stint for considerable salaries for new employees (in general, in Russia, neither before Peter nor after a foreigner was it necessary to change the religion to enter the service, but in this case we will not forget that there was a war, and the Swedish servicemen were enemies who you would believe ? Only if they are will render that “theirs”, and theirs then is first of all a one-faith).

Summing up, I would like to say that the life of the captured Swedes in Russia was not uniform. Some of them got into private farms and along with Russian peasants, someone got into construction or mining (where, by the way, almost everything could be taken prisoner, except for escaping, for which it was easy to run into the death penalty), or , using his skills in civilian life, he became popular in those places where fate brought him, but someone was lucky much less. There were those unfortunates who, as a result of abuses by local authorities, found themselves in the position of slaves and whom they traded like cattle in the markets. In order not to aggravate the fate of Russian prisoners who were in Sweden, the Russian central authorities tried to fight this sort of thing, but, unfortunately, this was not always the case.

After the end of the Northern War, a considerable part of the prisoners returned to their native kingdom, which already had little resemblance to the country they had once seen: now it was land devastated by years of opposition. However, this did not prevent the Caroliners from addressing the petition to the then Queen’s name with the aim of obtaining soldiers ’salaries during the years of captivity. Of course, for the budget of Sweden it was a considerable blow, and he was not ready for such trials. Therefore, payments could drag on for years. However, to the credit of the authorities of Sweden, they did not abandon their loyal servants.

In fairness, we note that in Russia, with the Russians who were captured by the Swedes, they also acted humanly, without leaving them alone with their troubles.

According to Russian laws, following the Northern War, prisoners of the “defectors” included people who converted to Orthodoxy and entered the Russian civil service. All the others, even those who married Orthodox, were not deterred by the Russian authorities (there is an interesting question: if such a husband leaves his Russian wife for homeland, and after 2 of the year, neither the answer nor the greeting, the woman was considered free, t. e. automatically divorced). Also defaulters were considered persons who have suffered criminal penalties.

Well, the theme of "Russian captivity" in the period 1700-1721. interesting enough, but, unfortunately, can not meet the framework of a single article, because this issue is quite multifaceted, and, most interestingly, as of today, not fully explored by experts.