December 5 2017
14
The Egyptian Air Force received the last three single-seater Rafale EM fighters, which arrived from France at the end of November. TSAMTO. 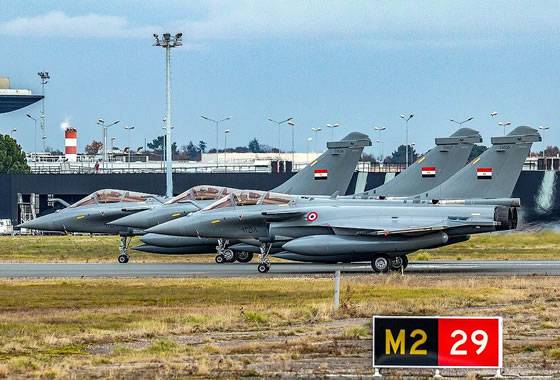 The contract from 2015 on the 24 multi-purpose fighter Rafale provides for the supply of Egyptian air forces 16 twin Rafale DM and 8 single Rafale EM. The transaction value is estimated at 3,6 billion euros.

The Egyptian Air Force has already used French fighters in combat conditions, in particular at the end of May they were used in an operation against the militants of the IG (prohibited in the Russian Federation) in Libya.

Ctrl Enter
Noticed oshЫbku Highlight text and press. Ctrl + Enter
We are
Russia firmly occupies a place in the global arms market 2 and will maintain its position in the foreseeable future.The 20 rating of the largest arms deals, decisions on which were made in 2012
Military Reviewin Yandex News
Military Reviewin Google News
14 comments
Information
Dear reader, to leave comments on the publication, you must to register.