Pilsudski. A century and a half "father" of modern Poland

December 5 2017
54
One hundred and fifty years have passed since the birth of Jozef Pilsudski, who can rightfully be considered the founder of modern Polish statehood. AT history Pilsudski entered as the avid enemy of Russia - that the king, that the Soviet. It was on the confrontation with Russia that he built the Polish ideology during the years of his rule. Although Pilsudski was born in the Russian Empire and was a Russian citizen for many years, he never felt like a citizen of Russia, but always was a Polish nationalist, dreaming of a revival of the powerful Polish-Lithuanian state. 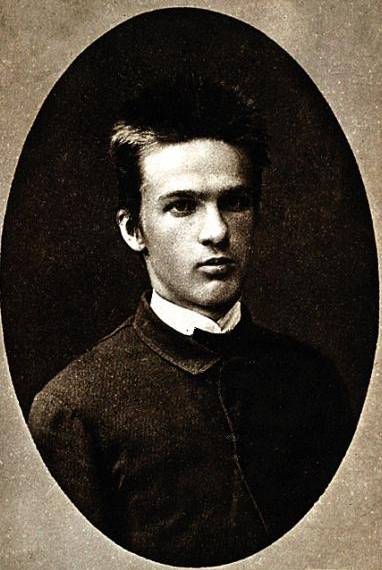 The future marshal and de facto ruler of Poland was born on December 5 1867 of the family estate Zulov, which was located in the territory of Sventiansky district of the Vilna province. By origin, Jozef belonged to an old and noble gentry family name, dating back to the Ginetovich family. The father of the future leader of Poland, Jozef Vincent Peter Piłsudski, during the next Polish uprising 1863 of the year, served as commissar of the national government Zhond Narodovy in the Kovno district. The mother of Jozef Pilsudski, Maria Billevich, also belonged to a noble family. In the family of Pilsudskih there were twelve children, Jozef was the second son.

However, in the 1874 year, when Yuzef was seven years old, the family moved to Vilna. This is where the further development of Jozef Pilsudski took place. He enrolled in the "elite" First Vilna Gymnasium. This educational institution has given many well-known politicians in the future. Perhaps, besides Jozef Pilsudski, Felix Dzerzhinsky, the future revolutionary, Soviet party and state leader, founder and leader of the Cheka, became the most significant figure among its graduates.

“Advanced”, as they would say today, Polish youth Vilna sympathized with revolutionary ideas. The elder brother of Jozef Pilsudski, Bronislav Pilsudski, in 1882, founded the Spójnia circle, which was involved in delivering various Polish patriotic literature to Vilna. Of course, Jozef also joined the mug. In 1885, he entered the medical faculty of Kharkov University and soon began to take an active part in revolutionary activities. Together with his elder brother Bronislav Jozef Pilsudski, he joined the Terrorist faction of the People’s Will and took part in the preparation of the assassination of Emperor Alexander III. By the way, Alexander Ulyanov was executed for this conspiracy. Bronislaw Pilsudski emperor pardoned, replacing the death penalty 15 years of hard labor on Sakhalin. Jozef Pilsudski, who played a minor role in the conspiracy, was sentenced to 5 years in exile in Eastern Siberia and was soon transferred to the Irkutsk Governorate. Pilsudski served the punishment "from bell to bell", returning from exile in 1892. Then he joined the newly created Polish Socialist Party.

Quite quickly, Pilsudski acquired a major influence in PPP. His position was distinguished by a deep conviction in the necessity of combining the socialist ideology of the party with Polish nationalism. Pilsudski believed that only in this case the party will get a chance to achieve the independence of the Polish state. Nationalist beliefs were inherent in Pilsudski throughout the subsequent decades of his life. Pilsudski hated Russia and tried in every way to mobilize the Poles to fight the Russian Empire.

The position of Pilsudski in the pre-revolutionary years clearly characterizes his behavior during the Russian-Japanese and First World Wars. When the Russian-Japanese war began, Pilsudski was set on fire with the idea of ​​creating the Polish Legion as part of the Japanese army. PPP representatives contacted residents of Japanese intelligence, seeking to gain support from Japan in the armed uprising in Poland. However, the Japanese representatives rejected the idea of ​​creating the Polish Legion, since only ethnic Japanese could serve in the Imperial Army of Japan. Then Pilsudski and his associates suggested that the Japanese organize a partisan war in Poland and Lithuania, but General Yamagata Aritomo, who led the General Staff of the Imperial Army of Japan, regarded the proposal of Pilsudski as frivolous. However, the Polish socialists carried out several explosions on the railway. Gradually, the PPS turned to underground warfare, organizing sabotage, attacks on trains, expropriation of banks. Jozef Pilsudski took the most active part in organizing the attacks.

In 1905, it was Pilsudski who headed the Fighting Department of the Central Committee of the PPS, in charge of all the armed actions of the party. Under the leadership of Pilsudski, the militants of the Polish Socialist Party were trained. Shortly before the outbreak of the First World War, he headed the Strelets Union - a militarized organization that considered itself the prototype of the future armed forces of an independent Poland. The training of Polish legionnaires was carried out on the territory of Galicia with the direct patronage of the Austro-Hungarian authorities. Although part of Poland became part of Austria-Hungary after the partition, Pilsudski believed that the Austrians were a “lesser evil” compared to Russia and willingly enjoyed their support.

The leader of the Fighting Department of the PPS made the right bet - with the help of Austria-Hungary he managed to organize officer courses and prepare command personnel for the Polish units. 3 August 1914, Piłsudski created the first personnel company from the militants of the Strelets Union. 12 August 1914, the Polish legionnaires entered the Polish-Polish forces as part of the Austro-Hungarian forces. At the same time, the people of Pilsudski tried to organize an armed uprising against the Russian authorities in the Russian part of Poland. 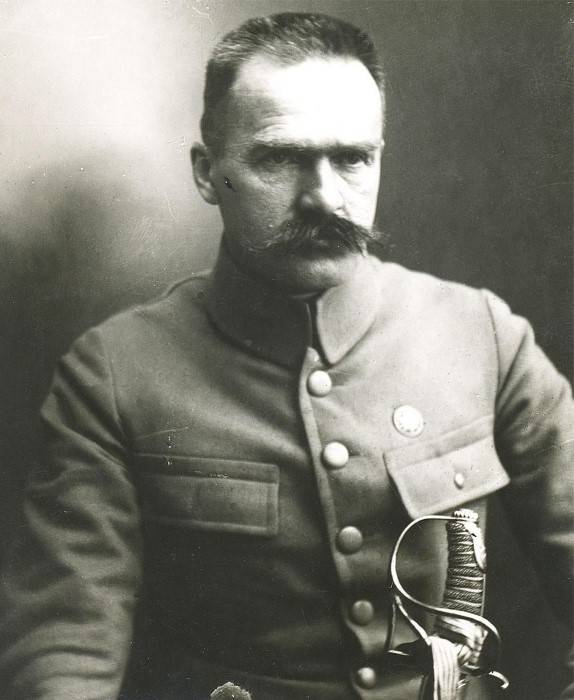 During this time, Pilsudski gained enormous prestige among the nationalist-minded part of the Poles. This was facilitated by his halo of a martyr for a just cause, a fearless fighter for the independence of Poland. November 14 1918, after the capitulation of Germany and Austria-Hungary, all power in the country was transferred to Józef Pilsudski, who was proclaimed the first Head of the Polish State. So overnight, yesterday’s political prisoner and the day before yesterday’s militant leader turned out to be the first person in Poland to regain its independence. Naturally, Pilsudski, having come to power, immediately abandoned socialist phraseology, which he had previously actively used.

Pilsudski’s concept was to unite Poland, Lithuania, Ukraine and Belarus within the framework of the Confederation "Intermarine" (with the leading role of Poland, of course). However, following the Soviet-Polish war, when the Ukrainian and Belarusian lands were divided, it became clear that this idea was not feasible, at least in the foreseeable future. Moreover, Lithuania did not intend to lose its state sovereignty, and the Ukrainian population, which turned out to be part of Poland, still counted on gaining national independence (in Galicia, in 1920-en - 1930-s, many nationalist organizations emerged that spoke with anti-Polish slogans ).

Of course, the impossibility of implementing ambitious political plans seriously hit the political pride of Jozef Pilsudski. In 1922, Pilsudski resigned as head of state. Without Pilsudski, even harder times began in Poland. The economic crisis was growing, social problems were aggravating, and most importantly, Poland did not succeed in achieving the ambitious goal of restoring the state to the borders of the former Polish-Lithuanian Commonwealth. In this situation, Józef Pilsudski decided to return to politics and began to prepare for a military coup. This task was facilitated by the fact that on November 27, the post of Minister of War of the country, 1925 was occupied by the general of armor Lucian Zeligovsky - Pilsudski’s longtime ally. He “closed his eyes” at the beginning of the inauguration of the loyal Pilsudski divisions in the area of ​​the capital. 12 May 1926, began the famous "Piłsudski campaign on Warsaw." Government troops resisted. The fighting continued for three days, killing 379 people from both sides. As a result, Polish President Stanislav Wojciechowski resigned. Jozef Pilsudski was elected a new president, but he chose to give up the post of a formal head of state. Ignacy Mostsitsky became the President, and Jozef Pilsudski was appointed Minister of War and Inspector General of the Armed Forces. At the same time, everyone understood perfectly well that it was Jozef Pilsudski who was the de facto head of the Polish state, determining his domestic and foreign policy.

Having received a fully controlled government, Piłsudski set about establishing an authoritarian regime. A non-partisan block of cooperation with the government was formed, playing the role of the “party of power” under Józef Pilsudski. In domestic policy at the end of 1920-x - the beginning of 1930-x. Pilsudski was guided by the suppression of the opposition, and the most severe repressions were launched against the Polish communist movement. In the communists, Pilsudski saw not only dangerous competitors in the struggle for power, but also conductors of Soviet influence. In these years, the Soviet Union was considered by Poland as the main military-political opponent, a threat to independence and political formation. Under Pilsudski, anti-Sovietism and anti-communism acquired the features of a national ideology, replacing the former Russophobia of the Polish nationalist movement. 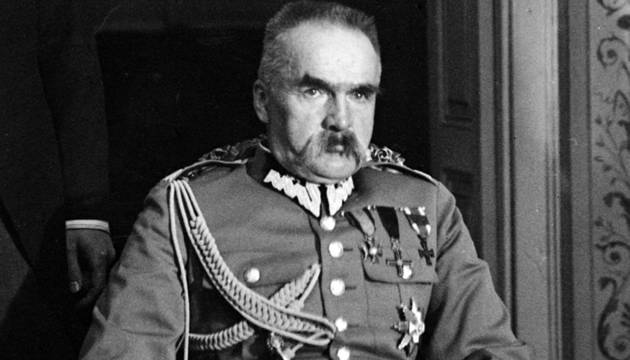 In addition to the communists, representatives of the Ukrainian nationalist movement were also subjected to repression, seeking to gain the independence of the lands of Galicia and Volyn that were part of Poland. In response, Ukrainian nationalists launched terrorist acts against the Polish authorities. So, the Minister of Internal Affairs of Poland B. Peratsky was killed. Pilsudski had no choice but to move on to the “pacification” (pacification) policy of Western Ukraine. In practice, it meant a total ban on any Ukrainian national organizations, including even peaceful, non-political public organizations, arrests and placement in concentration camps of Ukrainian nationalists and persons suspected of sympathizing with them. All these tough measures have turned the Ukrainian population against Pilsudski and Poland even more.

As for foreign policy, after the military coup of 1926, Poland gradually turned to the concept of “equidistance”. If at first the Soviet Union was considered the main adversary of Poland, then the gradual revival of the power of neighboring Germany also could not but disturb the Polish leadership. Actually, Poland, located between the two powers, had no choice but to maneuver between them, counting on the help of Great Britain and France.

Realizing that Poland cannot withstand the Soviet Union, Pilsudski and his entourage drew attention to the neighboring small Czechoslovakia, to which territorial claims also arose. Ultimately, this policy, after the death of Pilsudski himself, led to the partition of Czechoslovakia between Germany, Hungary and Poland, opening up a direct path to a further German attack on Poland itself.

Jozef Pilsudski passed away 12 on May 1935 of the year in 20 hours 45 minutes. The cause of death was liver cancer, the symptoms of which were actively manifested two years before the death of the Polish leader. The comrades who came to power after his death could no longer be compared with the late marshal for their leadership qualities and political talent. Pilsudski entered the history of modern Poland as a national hero, the founder of the country's independence. Admittedly, it really was. Jozef Pilsudski acted to the best of his understanding of Polish interests and sought to turn Poland into a powerful and powerful state united by a common national idea. It is clear that these aspirations of Pilsudski were contrary to Soviet / Russian state interests.

Ctrl Enter
Noticed oshЫbku Highlight text and press. Ctrl + Enter
We are
Results of the week. "Either true or all is well"Yuri Drozdov: Russia prepared the role of the sacrificial calf
Military Reviewin Yandex News
Military Reviewin Google News
54 comments
Information
Dear reader, to leave comments on the publication, you must to register.