December 11 2017
22
The courts of the Middle Ages cannot be called humane. Under the motto of fighting evil spirits countless people were sent to the fires. And if women were burned on charges of witchcraft, then men were like werewolves. Such an unenviable fate was awarded to the French peasant Gilles Garnier. 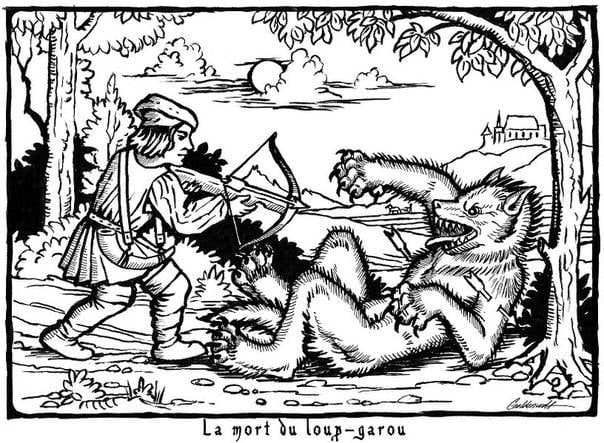 It is not known who the spouses Gilles and Appolina Garnier were and did before the fateful move to Saint-Bonno, a small village in Burgundy near the city of Dole. There were many rumors about the unsociable couple, especially about Gila, in the vicinity. It was said that he had moved to this wilderness, either from Lyon, or from some other large city. They also said that the couple lived in the nearby town of Dole, but for some reason decided to lead a reclusive life. Since Garnier tried in every way to avoid contact with local residents, gossip was born literally out of the blue. After all, the medieval community is accustomed to live by strictly defined rules. And any deviation from them aroused suspicion and prejudice. Accordingly, in case of an unsuccessful set of circumstances, people “not like everyone else” found themselves alone with the system.

So the Garnier couple, who chose a secretive lifestyle, from the first day aroused a lot of suspicions among the locals. Everyone was worried about the questions: “Why do they live on their own? Something to hide? ”And to hide, apparently, Gilles had something. According to some researchers, he suffered from a disease that set him apart from the crowd. For example, hypertrichosis. In this disease, increased hair growth begins. Somehow Gilles managed to hide it while living in a big city. But then, apparently, his secret was revealed. Fearing for his life and the life of his wife, Garnier decided to move to the wilderness. He hoped that in poor places no one would care about him. But miscalculated. He did not take into account that in the wooded area there could be angry predators - wolves, on which his face overgrown with thick hair was so much like.

The Garnier family was unlucky from the start. As soon as they moved to Saint-Bonn, the locals began to terrorize the unknown predator. It all started quite banal - animals began to disappear from the herds grazing outside the village. But then the cows, the goats, and the sheep became insufficient to the beast. He began to hunt for people. I must say, most often in those days the shepherds were children. Accordingly, the predator to deal with the child was much easier than with a cow. And when the beast began to drag young shepherds and shepherds into the woods, the locals were not scared. And not a man-eating wolf, but a kind of supernatural being. The usual gray predator of villagers hardened by difficult conditions was difficult to frighten. After all, the constant life on the border with the forest has taught them to certain rules of "etiquette".

Then everything was different. Witnesses (or those who considered themselves to be such) unanimously claimed that it was not a wolf who settled near the village, but a real werewolf. Some of them swore that they were trying to kill a hellish offspring, but the beast, having received several wounds, ran away.

As it should be in such cases, most of the harsh locals instantly went limp and began to pray to God for protection. And the representatives of the church reduced everything to a sinful way of life. The only ones who did not panic were several hunters. They promised that they would deal with the predator. It doesn’t matter whether it’s a regular wolf or a devil’s messenger.

Began mass raids. How many wolves have been destroyed is unknown. But there was no proper effect. Beasts and people disappeared with enviable consistency. The church stood its ground - pray, repent, and you will be deliverance from all adversity. The hunters continued to wool the woods in search of a predator. The peasants and peasant women simply panicked, preparing to die from the teeth and claws of the earthly incarnation of Satan.

But unexpectedly in all this madness, someone remembered the hermit's family. Local people immediately picked up this version. At first they whispered about Garnier in the doorways, then began to speak loudly, publicly. But the local authorities, like the church, did not have a good reason to detain Gilles and his wife. Because recluse was not a crime.

The bloody killings continued. And then the local parliament decided to give assistants to hunters. For this, an appeal to all capable men was published. The supreme governing body voluntarily-forcedly asked them to arm themselves and, together with the professionals, arrange the most massive and ruthless hunt for gray predators.

And soon the motley crowd with pikes, sticks, axes, halberds, knives, pitchforks and arquebuss moved to the main battle of their whole life. It is clear that all the main work was done by hunters. The peasants, by and large, played the role of extras or bait, here as lucky.

How long the raid lasted, not exactly known. According to some information, several days (and even weeks), according to others - by the evening the men had managed to find a bloodthirsty monster (fantastic luck!). If you stick to the official version, when the inhabitants of Saint-Bonn came out to one of the forest edges, they saw a terrible picture. In their eyes, a huge shaggy monster was already preparing to break off the little girl. We must pay tribute to men, they are not afraid, and rushed to the attack. The beast did not expect such numerous reinforcements, so he quickly got lost in the trees.

The girl was frankly lucky. And even though she had several terrible bites on her body, they did not represent a danger to her life. But the main success was that the men were able to identify the predator. It was, of course, not a wolf, even though the animal resembled him strongly. In it, they recognized Gilles Garnier’s bloodied-haired face!

The extracted information was immediately transferred to the parliament. Share. And the authorities decided that such evidence was more than enough to outlaw the hermit, arrest him and subject him to the most severe interrogation. And soon, armed men came to the house to Garnier. 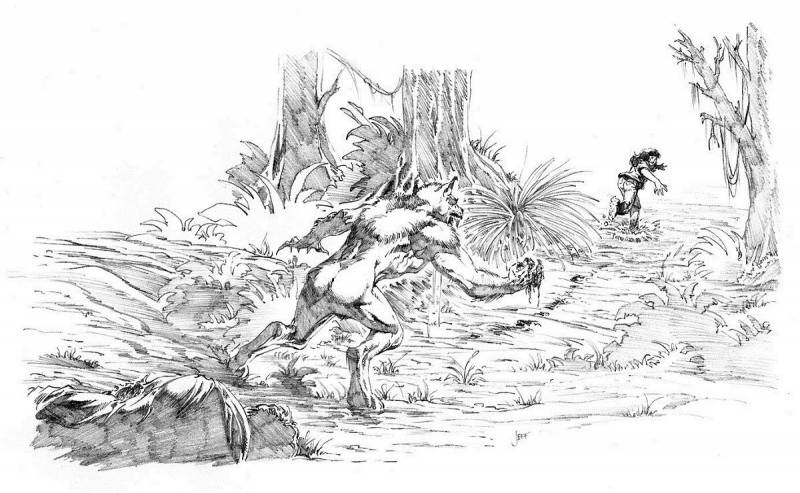 Gilles clearly did not expect such a turn of events. He was confused and did not even try to clarify the situation. Instead, the hermit agreed. That's just his testimony is constantly different and confused. At first he confessed to the killings. Then he admitted to being a werewolf. Here he refused his testimony, saying that he was “only” a cannibal. But after talking with representatives of the Inquisition, Gil again began to assert that he could turn into a wolf.

By the way, when Garnier was arrested, his body was examined for puncture and gunshot wounds. Neither the first nor the second was not. The inquisitors did not find a single scratch on the man. And this served as evidence of Gilles' guilt. As you know, werewolves have excellent regeneration. This is just confirmed the "integrity" of Garnier.

Then Gil began to talk in detail about his crimes. True, for some reason nobody paid attention to one inconsistency. The hermit in paints, with the smallest details told about the murder of two boys-cowherd boys and two girls. He killed one near Dolya, and the second near the neighboring village of Perruz in the garden of fruit trees. And if Gilles tore the first child, having accepted a wolf mask, he tried to eat the second one. But he failed. He was frightened by a group of male day laborers. After some time, Gilles attacked a girl who was walking in the woods near Dolia. He called her "especially delicious." Then, again becoming a man, he returned home, taking with him the half-eaten corpse. He wanted to treat his wife with a “delicacy”.

Curiously, the record of Granier’s interrogation has reached our days: “... and by killing and killing her with his own hands, seeming paws, and teeth; and dragging her with his hands and terrible teeth to the Serre forest mentioned, there he skinned and ate the meat from his thighs and hands, and, not satisfied with this, he carried the meat to his wife Apolline in the Saint Bonno desert near Amangis, which was his residence and his wife. In addition, the above named defendant, a week after the All Saints festival, also in the form of a wolf, grabbed another girl in the same places, next to the meadow of Ryupt, in the province of Otum, located between the above-mentioned Otum and Shastenoy, shortly before noon of the specified day, and strangled her , and inflicted five wounds to her with his own hands, and intended to eat her, if not three people came to the rescue, as he himself confessed and confessed many times ... "

Discrepancy was in the number of victims. After an interrogation, Gilles talked about the four murders. Although, according to the initial data, there were several times more of them. Either the Inquisition decided that so many dead were enough, or whether the rumor of the people attributed to him what it really was not. As you know, fear has big eyes.
Garnier did not tell anything sensible about how his transformation into a wolf took place. If the German werewolf Peter Stumpf had a special belt supposedly presented to him by the devil, then Gilles “just became a wolf thanks to witchcraft”. But what kind of witchcraft allowed the man to turn into a predatory beast remains a mystery. However, after a short time, the hermit declared that a certain ghost (or “ghost person”) had become his mentor. The fateful meeting of Gilles and the mysterious creature took place just a few days after the Garnier family moved to Saint-Bonn. This ghost taught the hermit various magical tricks that allowed him to turn into a wolf. But then Gilles again changed the testimony. The creature disappeared from the protocols, and in its place came the "voice between the trees", which ordered Garnier to kill. At the same time there is not a single mention of the transformation of a man into a wolf, as well as of his excessive hairiness.

Did Gilles really suffer from hypertrichosis or not? Did he really kill, and not some sick lone wolf, unable to cope with other prey? Or maybe Gilles imagined himself a predator because of a mental disorder, or did he engage in cannibalism because he simply had nothing to eat? What if - this is a conspiracy? Perhaps the community of Saint-Bonn decided in this way to get rid of the inhodible hermit who did not agree to live by their rules? After all, he was originally suspected of murder, and then "quite by accident" saw him on the edge at the time of the crime. Somehow it came out very smoothly and smoothly. Gathered, went and found - as according to a pre-written script. We unfortunately never know the truth. 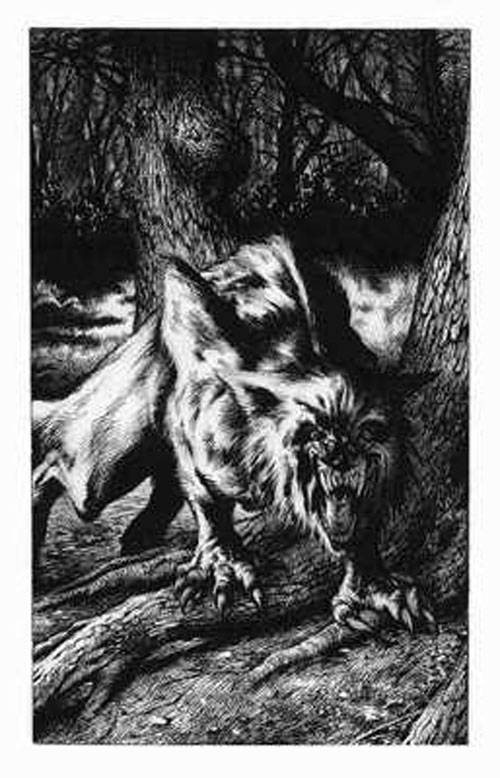 The court quickly handed down the verdict - refuse the “grace of strangulation” and burn it. It is curious that Appolina did not appear in the case at all. She seemed not to be. Therefore, what became of it is a mystery.

18 January 1573, Gilles Granier, accused of killing four children, went to the stake. His death in terrible agony was to be a warning to all who struck up friendship with evil spirits. The punishment for this one is a fire.