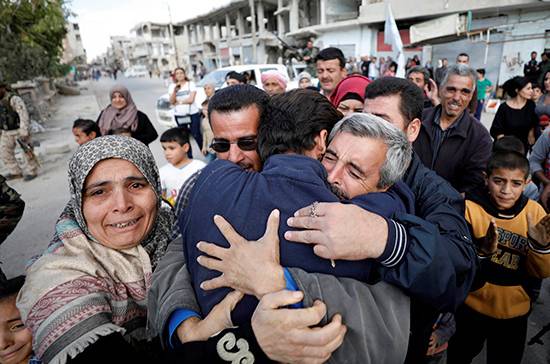 On the eve of the final completion of the hostilities in Syria, before which there are a few weeks left, the country begins preparations for the upcoming peace process. The key stage on the way to the exit of the republic from the multi-year crisis should be the Congress of national dialogue, preparation for which is now in full swing.

Indeed, the importance of the upcoming forum, initiated by Russia a few months ago, is extremely difficult to overestimate, as stated on Friday by CAP Ambassador to Moscow Riyad Haddad. In particular, speaking at the opening of the first All-Russian Student Olympiad in Arabic in Kazan, the diplomat noted that the Congress, which will be held in Sochi, will become “a turning point in Syria’s life”, adding that “there will be a lot of representatives public figures, there are a lot of representatives of public organizations, various representatives of parties, journalists ”.

It should be noted that in parallel with the presentation of Haddad in Geneva, the eighth round of inter-Syrian talks with the participation of the delegation of the government of the Arab Republic and the joint group of the Syrian opposition, which, however, did not succeed, culminating in mutual accusations. According to the head of the group representing the interests of the official Damascus, the delegation does not intend to enter into direct negotiations with the opposing side, as long as it requires the immediate departure of President Bashar Al-Assad.

Representatives of the opposition, in turn, accused government negotiators of setting conditions, which, in their opinion, is unacceptable and even irresponsible at this stage.

In general, it can be stated that the defeat of terrorist groups in Syria by government forces transferred the opposition of the leadership of the Arab Republic and the so-called fighters against the regime, often acting hand in hand with extremists, to a new plane. The only difference is that now instead of the ruins of Raqqi, the fans of “democracy” are now conquering Swiss Geneva, and business suits have changed their military uniforms.

Nevertheless, it is rather difficult to imagine that a transformed opposition will take a long time. Obviously, the alignment of forces both in Syria and in the entire Middle East region has undergone significant changes in recent years, and those who have recently sponsored the continuation of the conflict are now at risk to remain at the bottom of the trough. At the same time, Damascus, behind which allies such as Russia, Turkey and Iran, finally recovered from the shock of many years and took matters into their own hands, sending a very clear signal to the world community. In this regard, the efforts of the Syrian opposition, which chose Geneva as a platform for discussion, look like attempts to bargain for comfortable living conditions.

However, the question arises: are the citizens of Syria, who suddenly became hostages of the “democratic” aspirations of a handful of people, ready to forgive those who deprived them of their past and tried to take away hope for the future?

Ctrl Enter
Noticed oshЫbku Highlight text and press. Ctrl + Enter
We are
Syrian Ambassador to Russia: "Syria holds on to the strength of its people and the support of the Russian FederationWhat you didn't want to know about England
Military Reviewin Yandex News
Military Reviewin Google News
12 comments
Information
Dear reader, to leave comments on the publication, you must to register.