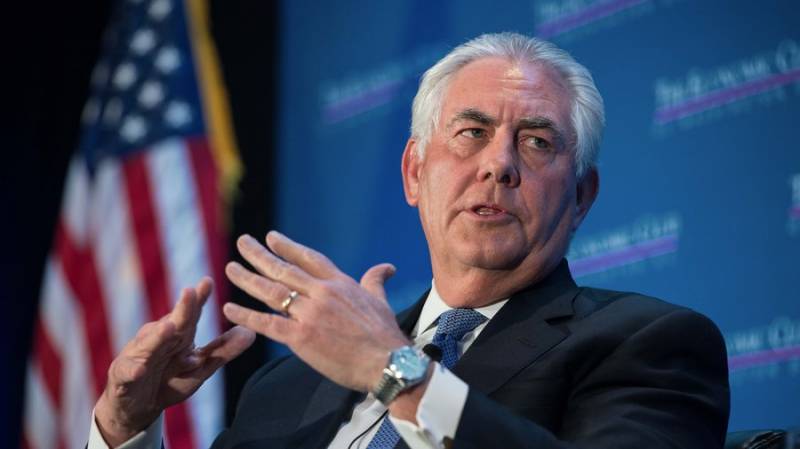 The State Department has closed the policy enforcement office. This happened despite the fact that the administration of Donald Trump is faced with harsh criticism from US lawmakers who are dissatisfied with actions in the application of new economic sanctions against Russia. Reports about it "Foreign Policy".

Secretary of State Rex Tillerson really reduced the position of sanctions policy coordinator, a Foreign Policy source said. Instead of an experienced diplomat and five staff members, the coordination of US sanctions at the State Department and other government agencies is now handled by a single mid-level official - David Tessler, deputy director of the Office of Policy Planning.

In fact, the "office of sanctions" dissolved. And this happened along with the fact that the administration of the Trump had earlier “missed” a key term (October 1), when new sanctions against Russia, adopted by the congressmen should be introduced in August.

Both facts heightened the “concern” of both democratic and republican legislators. Is it a joke: the White House in the times of Mr. Trump "wrongly leads the State Department" and "undermines the role of US diplomacy"!

“The reduction of the focal point for sanctions appears to be part of a larger defeat that took place at the State Department,” said Sean Bartlett, a spokesman for Senator Ben Cardin, who is a member of the Senate Foreign Affairs Committee.

Experts and former officials are now arguing: will the reduction of the position of focal point for sanctions policy “undermine” the ability of the State Department to monitor sanctions in general? After all, the sanctions have become "the cornerstone of US foreign policy with regard to opponents such as Iran and North Korea," the publication reminds.

Daniel Fried, a retired diplomat who was the focal point for the sanctions policy until February 2017, however, warns against misinterpreting Tillerson’s move. According to him, the reduction measures are by no means "not similar to the fact that [the State Department] completely refuses sanctions."

Other former officials have said that reducing the position and transferring the issue of sanctions to just one policy planning officer is “a mistake,” especially at a time when the administration is “struggling to cope with a number of foreign policy issues and formulate its position.” And now no “clear coordination” is possible in principle.

Until now, the US State Department has played a "crucial role in the effective implementation of sanctions," the magazine reminds. The position of policy coordinator was created with Secretary of State Hillary Clinton. Mr. Fried recalled that this office worked in tandem with the US Treasury and coordinated, for example, work with Asian allies in promoting North Korean sanctions, as well as in identifying "individual Russians trying to evade targeted US sanctions."

The “perestroika”, started at the State Department, shows that the influence of the Tillerson Policy Planning Department is growing. One of the high-ranking State Department officials believes that Tillerson creates his own “fiefdom” in the department in order to circumvent legislative oversight.

The alarm is also beaten by the influential newspaper The New York Times, which in 2016 was sympathetic to presidential candidate Hillary Clinton and not to Trump. AT editorial Already in the title states: "The administration of the Trump fighting with diplomacy."

The American diplomats, the newspaper reminds, over the past decades “have helped to achieve the Israeli-Egyptian peace treaty, the peaceful fall of the Soviet Union, the unification of Germany, the end of the war in Bosnia, and an agreement to contain Iran’s nuclear program.” All this “testifies to the strength and influence of America, as well as the experience of state secretaries and other diplomats who have worked to strengthen international stability and the observance of national interests.”

But with Trump, everything went wrong. Rex Tillerson became famous as a man "ill-suited for diplomatic leadership." Today he is destroying "his own department", which previously played a key function "in ensuring America’s national security."

Diplomatic activity under Tillerson "is undermined by budget cuts, the inability to put personnel in top positions, and an unstable president and secretary of state, who considers reorganization rather than politics to be his top priority." If we take into account the “aggressive behavior of North Korea, Russia and China,” the world “seems to be increasingly shaky every day,” adds the editors.

Under Trump’s diplomacy is shrinking, and the Pentagon is turning into a real bandit, the newspaper said. The State Department’s budget will be reduced by 31 percent, while the Congress intends to increase the Pentagon’s spending by about 15 percent. Obviously, “aircraft carriers and Tanks much more important than diplomatic measures, ”the newspaper concludes. Such one-sided budget priorities can contribute to military decisions to the detriment of diplomacy.

But Mr. Tillerson doesn't stop it. Since January, 2017, many State Department employees have left their place of work, including more than one hundred senior employees. Hiring new people has virtually ceased or slowed down. Mr. Tillerson has violated the concept of a smooth career for State Department staff, which in the future "will lead to a shortage of experienced diplomats." "It is not surprising that the morale [in the State Department] has plummeted," the publication states. But Congress "just approved the Pentagon’s budget for next year, which will increase the number of military personnel by 20.000 people."

State Department plans are also very lame. In South Korea, there is no American ambassador yet, which weakened the ability to promote a diplomatic solution to the North Korean nuclear crisis. There is no indication that the Trump administration has a plan for a war in Syria — and this is when Russia and Iran are “in command”!

Mr. Trump doesn’t seem to like professional diplomats a little, the article notes, and Mr. Tillerson is not interested in human rights issues, since the office dealing with these issues has also been curtailed.

The editors of the New York Times have only one hope: for congressmen. Maybe they will cancel these ominous innovations in the State Department. Increasingly, lawmakers are “warning of the danger threatening national security.” A group of senators, including John McCain, have already sent a letter to Mr. Tillerson, where they expressed concern about the “dubious management methods” of the State Department.

In another article in the same "New York Times" this theme is evolving. It is indicated that Tillerson, the former executive director of Exxon Mobil, does not hide his opinion: the State Department is a “bloated bureaucracy” and is generally ineffective.

The report says that Mr. Tillerson not only froze hiring staff in the State Department, but also offered “severance pay” in the amount of 25.000 dollars to working employees, hoping that almost two thousand career diplomats and civil servants would leave the department in 2018. More 26 older employees will retire. The term of their resignation came in November.

In short, the State Department is left without experienced staff, including its top thinned out, having lost those who have serious diplomatic experience.

"What Tillerson is accused of is clear: in causing damage to a power," writes a columnist MIA "Russia Today" Dmitry Kosyrev. - In East Asia, the “Korean crisis”, and the post of undersecretary of state for this region is vacant, there is no ambassador to South Korea either. In Syria, it is not clear what to do next, and there is no deputy secretary of state for this region, just as there are no ambassadors in Saudi Arabia, Turkey, Jordan, Egypt and Qatar. And then there is a change of government in Zimbabwe, but there is no deputy for African affairs. How so? How can they do it without American diplomacy? ”

It's an amazing thing: in the days of the new cold war, building up the "enemies of America" ​​power, in the era of sanctions, the State Department is thinning and shrinking. The New York Times and other democracy’s mouthpieces can only be recognized by Trump, but also by Tillerson’s agents in the Kremlin.

And only the Pentagon, who got rid of the peacemaker Obama, breathes easily: the arms race continues, costs are rising. From diplomacy, only Mr. Trump's Twitter remains. The rest is all "inefficient."

Understanding the reasons for what is happening is easy. Both Trump and Tillerson are businessmen. And not just businessmen, but heads of the largest structures. And they treat politics exactly as business.

The democratic chatter of the State Department seems to them superfluous-well, to hell with it. The staff of careerist diplomats seems to them a swollen bureaucracy - well, so dismiss everyone.

Therefore, the State Department will be made a big minus, and the Pentagon will be given a big plus.

Observed and commented on Oleg Chuvakin
- especially for topwar.ru
Ctrl Enter
Noticed oshЫbku Highlight text and press. Ctrl + Enter
We are
Overseas ally? Donald Trump - US Presidential CandidateSituational analysis of the death of the MH17 flight (Malaysian Boeing 777), made on the basis of engineering analysis from 15.08.2014
Military Reviewin Yandex News
Military Reviewin Google News
17 comments
Information
Dear reader, to leave comments on the publication, you must to register.