December 2 2017
16
An attempt to usurp the right to the truth failed in Geneva. It is strange that this attempt was undertaken by an organization whose task is to ensure freedom of speech. 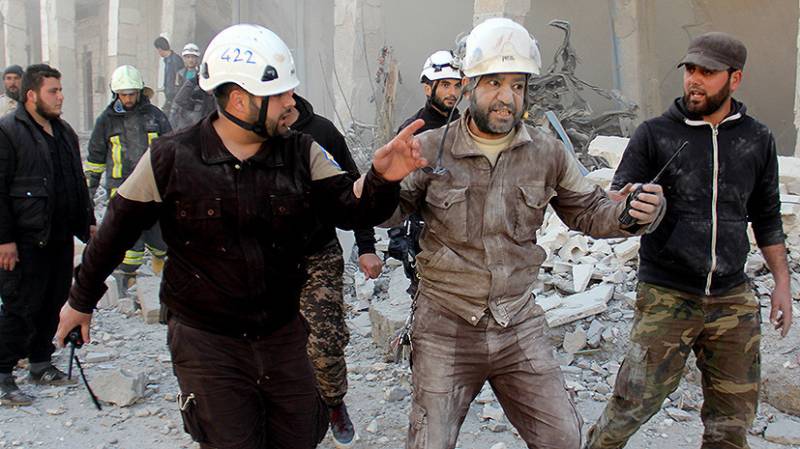 The Swiss branch of Reporters Without Borders opposed the holding of a conference about the scandalous movement "White Helmets". This is the very movement on which the politicians of Washington and its allies now rely, continuing the anti-Syrian actions.

Doubt as to the truth of what White Helmets broadcast on the air, according to their patrons from Reporters Without Borders, is unacceptable. Still would! They are "heroes"! Children rescued from the shelling of "insidious" Russia and the "bloody Syrian regime." The film about these "White Helmets" even won an Oscar. Untouchable! Like Caesar's wife, beyond suspicion!

And then they decided to criticize. In the Swiss Press Club. Before the start of the next round of negotiations on Syria. Unheard of! Unacceptable! Is it possible to criticize the "heroes"?

British journalist Vanessa Belaya, who was investigating the activities of this dubious organization, was invited to the White Helmets conference. She made a film exposing the “heroism” of the pseudo-volunteers, which is clearly visible - they are engaged in falsifying the “atrocities of the regime” and are closely associated with the terrorists of radical groups.

And after the date of the conference was announced (November 28), the head of the Swiss Press Club, Guy Mettan, received a message from the Swiss branch of Reporters Without Borders. This “independent organization” demanded, no less, no less, to cancel the conference. Allegedly, this is “Russian propaganda,” which “will damage the image.” They even tried to blackmail them with withdrawing their membership in the Swiss Press Club if their demand was not met.

“I’m amazed and I’ve never seen anything like this that an organization working to protect press freedom demanded censorship from me regarding a press conference. Usually, pressure to ban a press conference comes from a country with a tough dictatorship. ”

And the scheduled conference did take place. Although she had other critics besides Reporters Without Borders. Among these critics was the former US ambassador to Syria, Robert Ford, who, at the beginning of the Syrian war, supported the so-called “uprising” against the Syrian authorities and actively “hung out” among the armed groups of the “opposition”. Ford saronsocked that they would come to the conference "for the sake of free drinks."

Vanessa Beli in connection with this campaign launched around the event, in an interview with the agency “RIA News”Recalled that in Britain her attempts to expose the lies of the“ White Helmets ”often met with incomprehension. She even received threats.

“I don’t pay attention to such harassment and threats, because I always compare the situation with what people in Syria are under bombing. And I continue to work "
- she said.

"White helmets" were the main accusers of the Syrian leadership in the alleged chemical attack in Khan-Sheikhoun (Idleb province) 4 in April of this year. Without verifying these accusations, relying solely on the opinion of the dubious organization, Washington then carried out an overt act of aggression against Syria, its dignity and sovereignty - massive strikes at Shyrat air base. Now, without really investigating the incident, the United States and its satellites are trying to justify further aggressive measures against official Damascus with this incident.

In addition, the White Helmets were among the main critics of the operation to free Aleppo from terrorist groups. It is impossible not to recall what the howl on the air was at the time when the second most important Syrian city was liberated. What kind of "atrocities" did not blame Syria and Russia! However, if you take a closer look at the materials that were given out by the “volunteer rescuers”, then you can see how they saved the same girl several times. The “corpses” of allegedly “killed” civilians suddenly “came to life” and opened their eyes. But the picture, calculated on the western man in the street, worked. Public opinion was tuned against Syria, and at the same time - against Russia and its anti-terrorist operation, conducted with the full consent of the Syrian authorities.

A lot of “beautiful pictures” that fully fit in with what Western politicians are saying about Syria removed the “White Helmets”. But even there, in the West, there were critics who questioned all these well-mounted, touching films.

It would seem that an organization such as Reporters Without Borders should stand guard over the freedom of speech, but in fact it was an attempt to protect the White Helmets from exposing lies.

And this lie is not so harmless at all, because supporters of harsh measures against the Syrian authorities continue to rely on it. Based on this lie, the US is trying to stay in Syria after the defeat of the "Islamic state" (an organization banned in the Russian Federation). Relying on this lie, Washington is trying to push through the UN Security Council a resolution referring to Chapter 7 of the UN Charter (and this would already mean direct violence against Syria). Russia, which blocks such attempts, is trying to deprive the right of veto - and this already puts the world on the brink of a more serious conflict.

The conference in Switzerland nevertheless took place, despite all attempts to disrupt it. It had to be carried out with reinforced security measures - there was a real danger that the case of “innocent” speeches of “Reporters Without Borders” would not be limited. Syrians who testified that these so-called volunteers are disguised terrorists spoke on it.

And new accusations against Russia are coming from another “Sharashkin office”. The so-called Syrian Human Rights Monitoring Center accuses Moscow ... of killing an 53 man in the village of Al-Sha'af in the province of Deir ez-Zor. The Ministry of Defense of the Russian Federation called such accusations a complete fake.

This “Syrian Center for Monitoring Human Rights” is known for being based in London, and its only employee is a certain Rami Abdurrahman, who has been broadcasting from the very beginning of the Syrian conflict. Someone from London knows better how human rights are observed ... He was repeatedly caught in lies, but the problem is that this lie becomes the basis for various reports on the situation in Syria. And based on these reports, as well as the White Helmets, the bloody and vile anti-Syrian campaign continues.

Ctrl Enter
Noticed oshЫbku Highlight text and press. Ctrl + Enter
We are
Results of the week. “In our cooperative, the board is always agreed”Syria: Americans scare themselves, and Asma Asad buys chairs
Military Reviewin Yandex News
Military Reviewin Google News
16 comments
Information
Dear reader, to leave comments on the publication, you must to register.