“Caliphate” is getting closer to Russia

December 5 2017
24
Islamist terrorists are defeated in Syria and Iraq. The self-styled caliphate not only changes the strategy, moving away from the concept of the “state”, but also searches for new territories. One of the permanent new “bridgeheads” has become Afghanistan, where jihadists are now consolidating and sowing fear through terrorist attacks. Caliphaters are gradually approaching Russia, which creates a very real threat to the country's security. 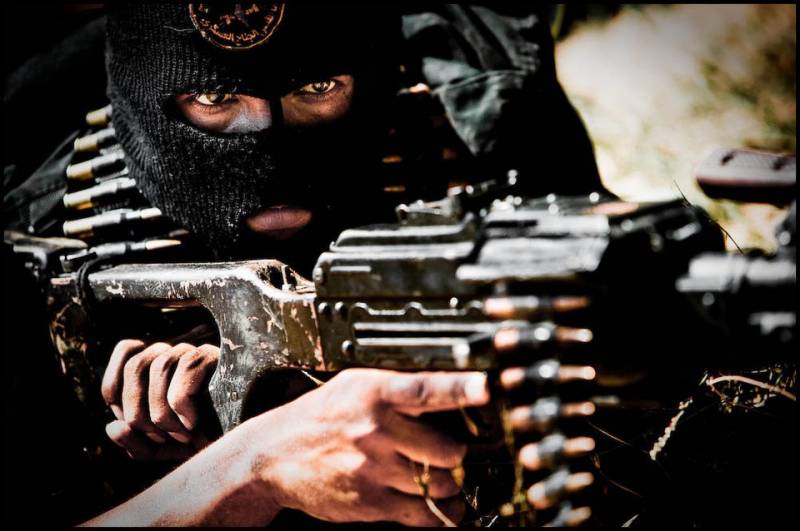 The militants of the Islamic State (IG, banned in the Russian Federation) are defeated both in Syria and in Iraq and spread throughout the planet. Together with the defeat in the Middle East, the strategy of the self-styled "caliphate" is changing. There are practically no “states” as such, but there are groupings and “branches” under other names that continue the “struggle”. Today, it is clear that the militants of "IG" under other "trademarks" are firmly entrenched in Afghanistan. That is why the US is talking about a new decisive operation against the remnants of the “IG”, entrenched in the country where the Americans have been unsuccessfully fighting terrorism since the fall of 2001. Now it seems that the task will become even more complicated.

In November 2017, it was Afghanistan that became the “bridgehead”, where the IG militants tried to revive the “fight”. The terrorists showed the world that it is here that they intend to continue their bloody work. Several major terrorist attacks, suicide bombings are evidence of this.

In Afghanistan, there is a terrorist group called Vilayat Khorasan, one of the so-called branches, or branches, of the Islamic State. It spreads influence over Afghanistan and Pakistan. Since January 2015, the role of the provincial “ruler” “Vilayat Khorasan” has been played by Hafiz Said Khan.

7 November, the world press reported on the attack by this grouping of the Shamshad office in the capital of Afghanistan. Islamists claimed the murder of twenty people. Subsequently, the militants' lie was revealed: officially, law enforcement authorities confirmed the death of only one employee of the TV channel and a security guard. About 20 people suffered as a result of the attack. One assailant was shot by police. The security forces were able to stop all three attackers and save many Shamshad employees from being killed.

The Taliban disowned this attack: a representative of the radicals, Sabiulla Mujahid, reported on the network that the Taliban (banned in the Russian Federation) was not involved in the attack.

16 November became aware of the next bloody terrorist attack "caliphate." It also occurred in Kabul. As a result of a suicide attack, according to various sources, up to eighteen people died. The bomber gave a blast near the restaurant, where representatives of the Jamiat-i-Islami party organized a meeting.

These high-profile terrorist attacks, which are shared by several days, became a kind of “anniversary” mark: locals “unofficially” learned about “IG” in Afghanistan three years ago. The Vilayat Khorasan group will “celebrate” 2018 in January of the “official” proclamation of the local “caliphate”. It is terrible to even imagine how the militants will mark this “date”.

"Vilayat Khorasan" is a considerable force that threatens the Afghan law enforcement agencies along with the Taliban. In this case, the latter compete for influence with the invading rival. The intransigence of the latter means the desire of the Islamists to gain a foothold in Afghanistan. And the United States, which will have to confront not only the Taliban, but also the new “caliphate”, does not like this very much. However, the Americans treat the new enemy with a strange disregard.

In late November, it became known that US special forces together with local forces in Afghanistan will conduct an operation against the "Islamic state." General John Nicholson, commander of the international coalition forces in Afghanistan, spoke of such plans. By the way, this is the same general who accused Russia of supporting the Taliban. Here is his words“Yes, Russia does support and is trying to legitimize the Taliban.” The scale of this support is difficult to determine, but the problem is that by supporting the Taliban, they help a group that justifies terrorism and prepares terrorists. ” The same Nicholson stated that in order to defeat the Taliban, a foreign military presence in Afghanistan should be maintained and “continue the current strategy.” Will this general now insist on building up a military presence in Afghanistan? After all, it will be necessary to fight against the "IG"! Hardly.

Mr. Nicholson is sure: the attempts of the "Islamic state" to create a "caliphate" cannot be crowned with success. In the course of combat operations, the group already suffers significant losses. "We have largely cut them off from external channels of funding and support, and they have difficulty replacing their leaders," the general said. "Afghanistan.ru".

In addition, according to the head of the “Strong Support” mission, Washington did not receive evidence of the transfer to Afghanistan of IS militants from Iraq and Syria. He believes that the supporters of the Islamic Movement of Uzbekistan (“IMU”) and former members of the Pakistani Taliban are fighting in the ranks of the Afghan group.

Meanwhile, the November terrorist attacks speak eloquently of the increased activity of ISIS in Afghanistan. Speaking about the desire of the branch "IG" to settle in Afghanistan, we can talk about the imminent desire of militants to penetrate into the countries of Central Asia. On this account there are different (often opposite) opinions of expert analysts and military experts.

“It’s premature to talk about the end of the fight against international terrorism in the Middle East. Of particular concern is the situation in Afghanistan, where we see the growth of the number of ISIL formations as the most dynamic, ”Zarudnitsky said. RIA News".

The need for exercises, according to the commander, is due to the military-political situation in the region of Central Asia, and “primarily in the context of the migration of militants of the so-called“ Islamic state ”squeezed out of Syria and Iraq.”

Zarudnitsky believes that the strategy of these groups threatens the security of not only Afghanistan, but also neighboring countries. “These and other factors formed the basis of our teaching,” he added.

The head of the CSTO joint headquarters, Anatoly Sidorov, stands with him. He notes that the situation in the region is complicated. “The successes of the Russian Federation and other participants in the fight against terrorist organizations, primarily with ISIL, on the territory of the SAR, to a certain extent, contribute to the partial transfer of terrorists to other regions. And, of course, the most probable region is the region of Central Asia, neighboring with Tajikistan, Afghanistan. The situation is restless there ... Therefore, not in terms of a threat, but in terms of training troops, we are conducting exercises in this particular region, ”said Sidorov.

As you can see, the information of the Russian military is significantly different from the statements of the brave American general, who doesn’t see militants from Syria and Iraq in Afghanistan, and has already finished off all other terrorists in words.

In a conversation with a reporter RIA News" Grigory Lukyanov, a lecturer at the HSE, said that Afghanistan is becoming the main center of the surviving IG forces. But Afghanistan is geographically close to the post-Soviet space.

“The situation in this country can be called a dead end,” Lukyanov comments on the current situation in Afghanistan. - Neither the state authorities nor their opponents from the Taliban movement have the resources to cope with the IG. Supporters of the “Caliphate” have secured control over the flows of drug trafficking and smuggling in certain parts of the country, therefore, they are economically invulnerable. In the foreseeable future, the Afghan IG looks stable: almost nothing threatens it either from a military or economic point of view. It is to this grouping that some jihadists defeated in Syria and in Iraq can join. ”

So, the Russian military and experts fundamentally disagree with the statements of the Americans.

And such a depressing state of affairs, when the newly-formed IG not only settled, but already firmly entrenched in Afghanistan, is indeed alarming. The local branches of “IG” really intend to expand their influence in the region, which is confirmed by the recent high-profile terrorist acts, for which IG took responsibility.

So far in the country talked about the Taliban attacks. According to the latest United Nations data, in six months of 2017, in Kabul alone, more than two hundred people died as a result of the terrorist attacks, more than 770 was injured. Almost all these tragedies and deaths are the fault of the Taliban. However, now the sad statistics may change, because this year many large-scale terrorist attacks were staged by “caliphates”, including suicide bombers.

Alas, the bloodthirsty fighters will still show themselves: next year, the three-year anniversary of the “activity” of the latter-day “caliphate” in Afghanistan will be celebrated, moreover, in 2018 and 2019. Parliamentary and presidential elections are to be held in the country.

The situation is extremely tense, and only the brave American General Nicholson can claim the futility of the attempts of the local Islamic State to create a new “caliphate”.

As for Russia, there is a high danger for it: Afghan Tajiks and Uzbeks join the reviving IS. Through them, the influence of the “Caliphaters” can reach Russia itself. This would mean further migration of the “caliphate” across borders. That is why the head of the CSTO joint headquarters, A. Sidorov, pointing to the partial transfer of terrorists to other regions, including Central Asia, says that military exercises in this region are conducted precisely with the aim of training troops. A potential thunderstorm exists, and counteraction to it is practiced. As for the statements of various US military in Afghanistan, these people have been successfully proving their inability to defeat terrorism since 2001.

Observed and commented on Oleg Chuvakin
- especially for topwar.ru
Ctrl Enter
Noticed oshЫbku Highlight text and press. Ctrl + Enter
We are
Situational analysis of the death of the MH17 flight (Malaysian Boeing 777), made on the basis of engineering analysis from 15.08.2014Results of the week. “In our cooperative, the board is always agreed”
24 comments
Information
Dear reader, to leave comments on the publication, you must to register.