The logical outcome of the coup in Lugansk

November 27 2017
83
I didn’t expect, I confess, such a number of questions on the topic “Well, what is there in Lugansk?” Yes, everything is normal there, all within the framework of Ukrainian scenarios. Nothing new or out of the ordinary.


Now, if Plotnitsky would not be allowed to leave, then there would be a bust. And so - everything is very decent. Quiet peaceful such a coup, without much noise, without casualties. The statement like "I'm tired, I'm leaving," a friendly vote for the new acting. the head of the republic (I am sure that the “acting” beekeeper will survive and become the head), a dustless position for Plotnitsky.

The main thing is that alive. The rest - little things in life, about which you should not grieve.

According to Leonid Pasechnik, who became the new leader of the republic, Plotnitsky’s departure "was affected by numerous combat wounds and the consequences of a concussion." I would also add: "And unwillingness to get new ones, possibly incompatible with life."

How bad was the administrator Carpenter and how good the lieutenant colonel of the SBU Pasechnik will be in this role, time will tell.

There is no desire to talk about who is worse or better. There were a lot of questions and a lot of discontent towards Plotnitsky. As an excuse, we can only say that Igor Venediktovich was “planted” by ours into an already practically formed team. Which, obviously, put up with him until a certain point. The moment has come, and Plotnitsky is “gone.”

The way it all happened is also not surprising. The Ministry of Internal Affairs is revolting against the legally elected leader, the people's militia, that is to say, the army, "does not support."

Such an alignment would be wild in a normal country. In the republic of the “fourth world”, where civil mechanisms and concepts like fidelity to the oath and everything else are completely absent, this is not something normal, it is natural. So - no surprise.

Yes, and the people didn’t have a desire to go out with shouts of “Lugansk, get up!” ...

By the way, May photos of this year. Oath of allegiance to the republic in the Lugansk Academy of Internal Affairs. Cornet and Carpentry are watching? Watching Well, the process of bringing too. In May they took the oath, in November they spat on it. And the lawfully elected leader of that ... otmaydanili 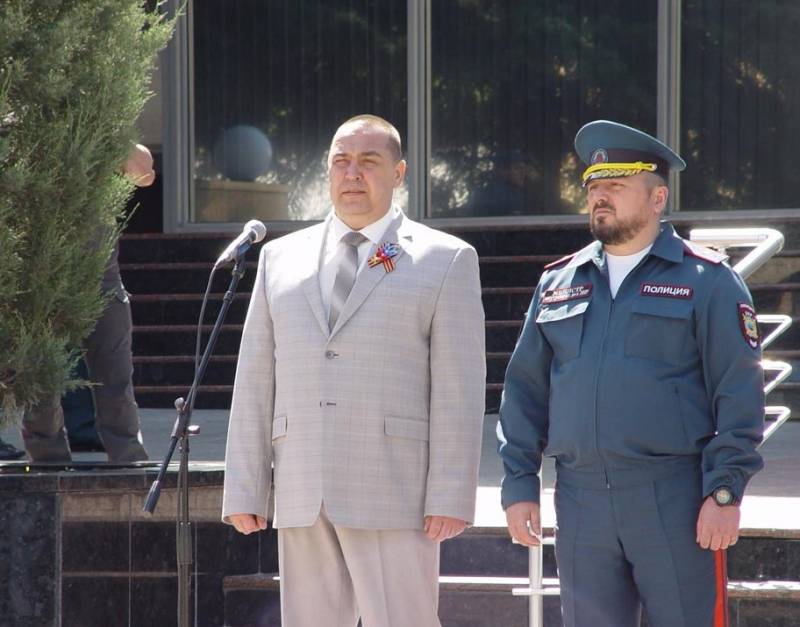 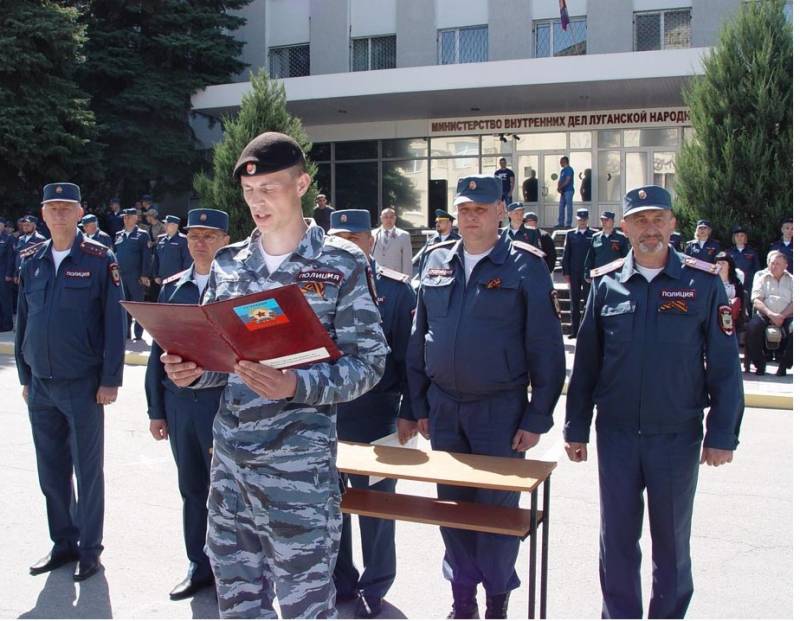 It's great that they did without human victims. Sumptuously. For this, you can, in general, leave behind the shutdown TRC Lugansk and read the charms of "democracy".

The coup was a success. Congratulations to Beekeeper and Cornet.

And what about Moscow? Many in the network shouted at the topic, where the Kremlin is looking and why does it not react?

Excuse me, but where should I look and how should I react? Angry shout "Cornet, a place!"? So Cornet is not a guard dog, he is quite a wolf with his pack. Which, as is obvious, goes after the leader. His pack. MIA LC.

To persuade through advisers? Threaten? Yes fullness. The reaction of Moscow just perfectly showed that there already deeply pofigu on all the rotation in the LC. Let what they want, then they turn back, if only they don’t bleed and don’t give more money than they give.

Actually, quite a logical result. As with the DNI in due time.

Yes, comparisons with the actions of Zakharchenko suggest themselves. Just Zakharchenko a little earlier did in the soup of all who disturbed him. He dispersed and reassembled the council, put out Purgin's companions, very democratically and in the spirit of the law repudiated Khodakovsky. We analyzed it in due time, and came to the conclusion that there is a law in the DPR, when Zakharchenko needs it.

The same, in fact, now in the LC. Yes, there is some kind of paper stuff stained with paint like the Constitution. So what? And nothing. Maidan-Lugansk everything. What are there any laws and constitutions if Pasechnik and Cornet decided to “do everything well”?

The standard scenario for Ukraine: one gang changes the other. And do not tales about the fact that the Donbass is not Ukraine. Geographically today - yes, not Ukraine. As for the people, that is another question.

At least, that in Kiev, in Donetsk, in Lugansk, issues are solved according to one scenario. Not having any relation to the rule of law.

Personally, I do not need other evidence.

Apparently, everything is still better than me, understood in the Kremlin. Therefore, the reaction in the style of "turn as you wish, for Minsk-2, do not crawl out, and to hell with you."

Well, “Minsk-2” is the first thing that the Beekeeper started waving. Good move, everyone should be calm.

But in general, just a coup. One gang changed the other. Local security officials removed the Kremlin henchman.

Normally, now that the LC is free to breathe deeply, Beekeeper has already spoken on the newly included Lugansk television and said that a bright future is not far off.

“Any state cannot exist without economy. This is the basis of the basics, so the efforts of me and my team will be aimed at raising and launching the production of those industrial enterprises located in the territory of our republic. ”

Well, God forbid, that the security official came out that did not work at the administrator.

There is in all this, however, for me personally a fly in the ointment.

"Siloviki of all republics, unite!". They sent me a funny movie. As Dmitry "Fierce" Pindyurin calls for help Zakharchenko.

All is nothing, but I know the gang called “Bryanka USSR” firsthand. There were friction with them about the stolen insulin, which my colleague Mokey Rusinov tried to transfer through them to one of the hospitals. Insulin "went away", there was no clear explanation. They spat, especially since we have already finished work as humanitarian workers.

And last winter, representatives of “Bryanka” drove me to the tears, so that we stood up for their commander, whom the evil regime decided to bring to justice. Imposed "spinning", banditry and robbery.

And so, "Fierce" is not enough that at liberty, it also makes such curious, in my opinion, statements. Funny. But again, as part of the overall scenario.

Total. The result is very simple. Everything that happened in the LC, as well as what previously happened in the NPT, is a natural result. The one who has more trunks is right.

In the "republics" the security forces won, with a full order with the trunks. Law? Constitution? What for? There are armed formations that are able to resolve any issue.

I emphasize that I am very glad that in the DPR and in the LPR these issues were resolved without bloodshed.

This already gives some hope that after some time the basis for resolving disputes and conflicts will not be the number of armed people, but something else. For example, the law. Written, preferably of course, not by people with automatic machines, but by people with legal diplomas. And without machine guns behind his back.

This is a real chance for the DPR and the LPR to make the transition to the countries of the Third World. So far, even a common comparison with Zimbabwe and Uganda, sorry, not in their favor.

Proof of? No problem.

It is enough to take only the cries of Cornet and Pasechnik about the alleged “planned attempt to transfer the LC to Ukraine”. After that Carpenter left.

Sorry, this is what kind of monkey you need to be to believe that a man planted to lead three years ago and elected by a people who, nuance, a family in Russia "under supervision", will do this? So that someone else has not eaten those fungi?

Hpp? Give the LC, and the DNI itself will be bent? Oh, this “treacherous and evil Kremlin” ... Although in my opinion, Beekeeper was born by his colleagues in the SBU. Painfully Kiev fool pulls.

But if you remember a piece of paper called the “Constitution of the LPR” (sorry, the basic document of the country is written with a capital letter), then according to her, after the departure of Plotnitsky, the head of the People’s Council “Degtyarenko, not Pasechnik” was to become the first person of the republic. everyone on the board decided that Pasechnik was better.

This once again proves that everyone does not care about the "constitution." But on people Pasechnik with machine guns and the prospect of a basement at best - no.

Enough. In general, we have two territories that control the power structures of two types of "republics" of the Ukrainian sample. Immediately I will clarify that the “Ukrainian model” is a solution to the problems of the Maidan-force, that is, completely in an unlawful way.

Carpenter’s success in controlling the way Deineko controls the implementation of the Minsk Agreements, the Beekeeper’s success in launching mines and enterprises of the LPR, and Cornet’s success in policing.

Over the last do not worry. The order will be complete, given the experience in eliminating the undesirable Cornet-Pasechnik duet. Only Bednov and the Brain are worth something, and besides them there was a whole series of "liquidated by the Carpentry".

By the way. Now, after these events, I hope many questions will disappear on the topic “Who was behind the“ strange ”deaths and liquidations in the LC?”. It is clear that Plotnitsky is to blame for everything (as the first person), but nevertheless, in practice he did not have any tools of influence, except for bodyguard.

So we look, how it will turn further.