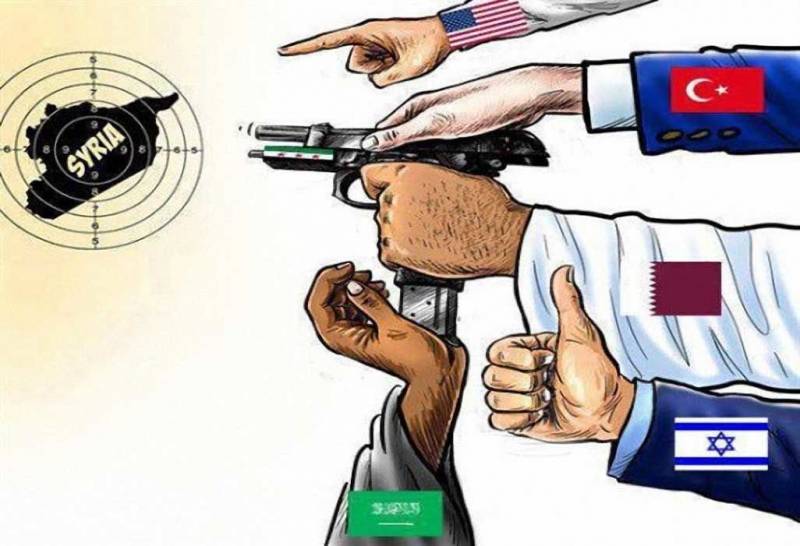 Recently at the Sochi talks, Bashar al-Asad received well-deserved greetings from Vladimir Putin. Then all the major news agencies, including Western ones, published photographs with the embrace of the two leaders. The Syrian President thanked the leadership and the Russian military not for support, but for “saving Syria,” as a fact. The Russian president cautiously adjusted his colleague: despite the results achieved, it is too early to rejoice.

Well, getting rid of ISIS is a very significant reason for a positive, according to Damascus. How else can the official authorities thank the liberation of their state from the igilovtsy? Perhaps the sincere expression of feelings is the highest award, defiled by the momentary mercantile interests that today are hidden behind the official “coalition” or “union”. But first things first.

Today, legitimate authorities control most of the territory of the Arab Republic. Practically everything that was stolen by the terrorists of the “Islamic State” a few years ago has now been returned to legitimate authority. Apparently, it is for this reason that the United States decided to extend for an indefinite period its “temporary” stay in a country to which no one invited them. It seems that Washington is doing well, because in Syria there is someone to rely on. If it were not for one "BUT".

The media have already had time to leak out the details of Washington’s plan regarding the creation in Syria of territorial entities not controlled by Assad. In this, the Americans pin their hopes on a number of opposition movements, united under the auspices of the "National Coalition of Syrian Revolutionary and Opposition Forces." With reference to the grant portal of the US government, online publications report that Washington intends to create an educational system in Syria and fund it until the 2020 year. Of course, this is done purely from "noble" motives. More specifically, in order to “prevent the growth of extremism and radicalism among Syrian youth, as well as to prevent the outflow of the population to neighboring countries in search of better opportunities in the matter of implementation and to prevent the formation of a lost generation in Syria”.

But, as has happened more than once before, the eloquent formulations of Western diplomats hide hypocrisy and blasphemy in relation to the dead civilians. If you remember how much effort from abroad was made to overthrow Assad and sponsor the militants who subsequently joined the banned in Russia "an-Nusra" or the same ISIS.

It seems that история repeats again. In fact, NKSRO is a political opposition group created with the money of Sunni monarchies like Qatar and Saudi Arabia, headed by Syrian deserters. This did not prevent, at the time, the then US President Obama from characterizing the de facto criminal coalition as the “sole legal representative” of the Syrians. In 2012, the NKRO political bloc was recognized as a legitimate number of western countries (Great Britain, Germany, France) and Arab states (Egypt, Qatar, the United Arab Emirates and others).

It is likely that the implementation of the US plan involves close cooperation with the Kurdish forces, the so-called “Syrian Democratic Forces” (SDF) - many representatives of the SDS are members of the national coalition.

In addition, not to consolidate the successes of the democratic forces in Syria would be an unforgivable mistake on the part of the American government. Today, Kurdish troops control the northern regions of the country, which is approximately 14 percent of its total area. This is the so-called "Federation of Northern Syria", an area of ​​over 25 thousand square meters. kilometers with the administrative units of Jezire, Kobani, Afrin, Membij, Kamyshliya in Hassek province. Also, the Kurds have pretty well established themselves as fighters against ISIS. This, of course, was of little interest to Americans, but at the same time it was necessary when ISIS became an obstacle for Washington, for example, on its way to oil fields in eastern Syria.

It is worth noting that all the successes of the Kurdish formations supported by the United States are in one way or another connected with the actions of the male and female paramilitary units YPG and YPJ. These self-defense volunteer units formed much earlier than the Syrian Democratic Army and several times joined the armed opposition or left it.

This is really a formidable force, in number over 120 of thousands of people, which, although now is an integral part of the VTS, de jure submits to the provisional government of Syrian Kurdistan - the Supreme Kurdish Council. The latter, in turn, closes on the "Democratic Union" - the main political party of Kurds in Syria. This is a kind of branch of the Turkish Kurdistan Workers' Party (PKK), which has been recognized as banned not only in Turkey, but also in the United States. Hence the Turkish-American conflict of interest in Syria.

However, another is interesting. The relations of the USA and the groups loyal to their government are far from perfect. This is not a time-tested union of Moscow and Damascus. All that common ideas about the homogeneity of the Kurdish people, reflected in the English-language articles, to put it mildly, exaggerated and do not reflect the whole reality. Among these nationalities there are only five ethnic groups, and, on a confessional basis, the Kurds can belong to both Sunni Muslims and Shiite Muslims.

Consequently, it can be assumed that the policy of creating an educational system led by the US-led coalition is one-sided and neglects all social, ethnic features, not to mention the interests of the Kurds. Behind this military-political problematics are hiding purely American foreign policy thoughts.

Perhaps it is for this reason that Moscow today managed to “beat” its geopolitical opponents from America, including on the pressing Kurdish issue.

Back in March of this year, the Russian defense ministry announced the coordination of actions between government forces and their allies on the one hand, and Kurdish self-defense units on the other. Then the units of the Armed Forces of Syria entered the occupied YPG Membidge.

Literally a month later, information emerged about the formation of a new pro-government unit, called the Regiment of Membijah Tribes, which included people from the environs of the above-mentioned city, including Kurdish self-defense units. According to media reports, the zone of application of the new regiment is located both in the north of the country and in its southern parts.

In the Kurdish rear near the Syrian-Turkish border in the city of Kamyshlia, the Syrian army is located and it exists relatively calmly. On the territory of the city of Aleppo, which is controlled today by the government army, there are Kurdish units Sheikh-Maksoud, where there are, including armed YPG formations.

And finally, one should not forget about the creation in early November of the Joint Operational Headquarters of the Russian Armed Forces near the village of Salchiah in the province of Deir-ez-Zor. The formed headquarters, in addition to organizing the interaction of YPG and the Assad army to destroy the militants, is entrusted with a humanitarian mission, which involves the provision of medical and other assistance in areas where terrorist organizations had just recently been located.

Without any doubt, the Americans will in every way in the future try to eliminate strategic miscalculations, increasing their influence both in the north of Syria and in the south, near the border with Jordan and Iraq. However, the active cooperation that we see today between official Damascus and adequate representatives of Kurdish formations (far from the worldview of Kurdish nationalists) gives hope that the Americans will not succeed in imposing their opinion on the numerous Kurdish people.

Ctrl Enter
Noticed oshЫbku Highlight text and press. Ctrl + Enter
We are
About Stalin and KhrushchevInterview by President Bashar Al-Assad to the Sunday Times
Military Reviewin Yandex News
Military Reviewin Google News
3 comments
Information
Dear reader, to leave comments on the publication, you must to register.