Who is responsible for the death of K-129

November 26 2017
17
One of the most mysterious underwater catastrophes fleet in the post-war period, the death of the Soviet K-129 submarine in the Pacific Ocean in March 1968 is considered. Based on those events in our country and abroad, several documentaries were shot, dozens of books and articles were written. However, the key to the death of the submarine missile carrier and its crew is still far from clear. It is possible that it will never be possible to establish for certain the circumstances that led to the tragic outcome.


ON THE COMMUNICATION SESSION DID NOT LEAVE

In January, 1968, due to the unavailability of the same type of K-99 from the 29 division of submarines to perform routine combat service, the crew of K-129 was withdrawn from vacation, began working out the course of combat training and preparation for entering combat service (BS ). However, the crew only 30 November 1967 of the year returned from the previous BS.

In February, the boat completed a control exit to the sea, moreover, due to the non-arrival from the leave of a full-time commander of the captain 1, rank VI. The captain of the 2 rank V.V. Kurenkov, the commander of the K-75. According to the results of the captain 2 rank V.V. Kurenkov reported to the command about the unavailability of the K-129 crew to perform BS due to low coordination. However, in order to prevent a BS plan’s disruption, the crew still received permission to go to sea, which took place on February 24, after intensive testing of coastal and sea elements of the combat training course.

In 00.00 8 in March, K-129 did not enter the planned control session. A day later, on March 9, a fleet alarm was announced and a large-scale operation was launched to search for the missing submarine, continuing in severe weather conditions for a total of 70 days. In addition to the forces of the Pacific Fleet, vessels of the Ministry of the Navy and the Academy of Sciences of the USSR were involved in the operation. As a result of searches on the ocean surface north-west of the Hawaiian Islands, aerial reconnaissance forces detected only a large field of diesel fuel, presumably formed above the place where the submarine was killed.

Based on the publicly available information, it is not possible to give an unequivocal answer about the causes of the death of K-129. There are several well-founded versions, but it is unlikely that in the near future they will be supported by physical evidence and original documents. The most complete picture, which allows revealing the causes of the rocket carrier’s death, is available only to the CIA, who oversaw the lifting and inspection of submarine fragments and has at its disposal photographs, inspection reports and other materials.

The most frequently replicated in the domestic media version says about the collision of the K-129 with the American nuclear submarine (NPS) "Suordfish". But a careful analysis and comparison of it with other similar events reveals several weighty arguments indicating the complete inconsistency of this assumption. 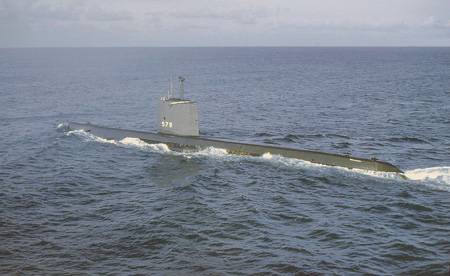 First, when 17 arrived on March 1968 of the year, the boat passed through the international fairway during daylight hours at the Japanese port of Yokosuka and was photographed by Japanese journalists; its photos were published in local newspapers. Visible damage to photographs of exclusively retractable devices gives every reason to believe that the object the submarine collided with had significantly less weight and dimensions than the Suordfish submarine itself, or the collision was light and occurred on a tangent. All known cases of the collision of submarines, when the participants in the incident were on the verge of death, ended in obtaining comparable damage. Those of "Suordfish" missing. In this case, the very fact of the appearance of a damaged American boat in the Japanese port refutes the assumption of its involvement in the event in question and an attempt to conceal the participation of this submarine in the incident. For reasons of secrecy, under such circumstances, it is most advisable to make repairs at the submarine's location, especially if there is a developed network of American ship repair enterprises in the area and appropriate conditions for disguise.

Secondly, the Japanese port of Yokosuka is significantly farther from the point of death of the K-129 than the American submarine base in Hawaii, and therefore the decision to send a damaged submarine for repair to a remote foreign port on the other side of the Pacific Ocean looks at least very illogical. It is enough to measure the distance from the point of death of K-129 to Oahu Island and to Japan using a map. The path that “Suordfish” would have had to go to the opposite side of the Pacific Ocean to the port of Yokosuka and back to Pearl Harbor, if it had actually participated in the collision with K-129, is more than three times longer than the way from the point of death to Pearl Harbor . Comments, as they say, are superfluous.

Indicative for comparison are the actions of the American command after the collision of the Soviet submarine K-108 of the 675 project under the command of Captain 1 of the rank B.S. Bagdasaryan from the American “Totog” submarine of the “Sturgeon” type off the coast of Kamchatka 20 June 1970, just two years after the death of K-129. The noises following the collision, recorded by the American acoustics and recorded on a tape recorder, were classified as the destruction of the durable hull of the Soviet submarine, so the latter was considered dead.

Coming up for 200 miles from the Soviet coast and installing an improvised communications antenna instead of a damaged one, Commander B. Bolderston, the commander of the American submarine, reported the incident to the command and was recalled to July 1 port at night without running lights. The submarine commander in the Pacific met the arriving submarine on the pier, and US Secretary of Defense Melvin Laird reported the incident to President Richard Nixon about the incident.

The boat was docked, and until the damage was covered with an awning, the crew was not allowed to leave the compartments. Both the American and Soviet submarines were seriously damaged, only by chance did they avoid the tragic consequences: the K-108 had a light hull pierced in the area of ​​the right propeller shaft, and the propeller shaft itself was jammed. The US submarines damaged the rudder horizontal rudders, the cutting itself received a two-degree bend with all the withdrawable devices jammed, the right screw K-108 piercing the Totoh top manhole cover, and part of the conning tower was flooded.

WHAT WAS THE SAME

As a result, we can conclude that if “Suordfish” really was involved in the collision with K-129, as it is stated by experts, the most suitable place for its shelter and repair would be Pearl Harbor, and not the Japanese port of Yokosuka. Yes, and the damage would have been more impressive. So there is no reason to accuse "Suordfish" of involvement in the death of K-129.

One of the officers aboard the Swordfish submarine in March 1968, when its periscope was damaged on the ice, Lieutenant Commander Richard Lee, later recalled: “... for those of us who were aboard the Swordfish (about 115 person), it’s interesting to know how a writer historical fiction can take individual events and draw any conclusion he wants. ”

With regard to the Suordfish submarine, another version looks quite logical, which was previously voiced by the American side, but did not say that it was one of the 9 American submarines sent to the waters of the Sea of ​​Japan after the North Korean X-YUMX of the American reconnaissance ship Pueblo (AGER-1968), and was engaged in exploration near Peter the Great Bay. According to this version, in March, currents and winds flow out of the Sea of ​​Okhotsk, the Tatar Strait and Peter the Great Bay into the Sea of ​​Japan a lot of floating ice, with which 2 of March clashed. The damage did not require urgent repairs, so the call at the port of Yokosuka was scheduled for March 2. Moreover, at the request of the Japanese port authority, the call was eventually postponed to March 15.

However, even after visiting Yokosuki, the submarine did not leave its operational zone, in which it had been located since the beginning of February, and after repairing the periscope, continued to carry out reconnaissance tasks. In May, she was noted in another Japanese port of Sasebo, where local environmentalists suspected her of discharging radioactive water into the water area and made a corresponding scandal. As a result, Japanese Prime Minister Eisak Sato had to declare that US nuclear submarines would no longer enter Japanese ports if their nuclear safety was not ensured by American specialists at the proper level. Only the 5 of September returned to the place of permanent deployment of the Suordfish submarine.