The military decided on drones 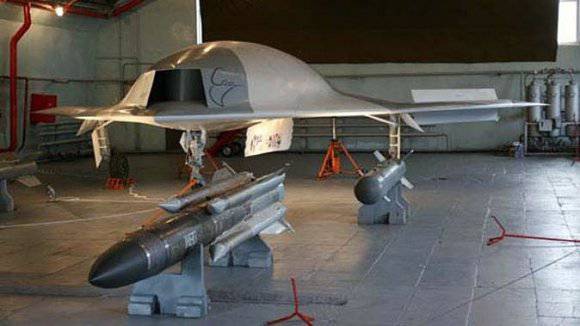 The newspaper "Izvestia". The Ministry of Defense approved the technical project for the development of the drone UAV of the Ministry of Defense decided on the characteristics of the drone unmanned aerial vehicle and approved the technical task for its creation. Izvestia was told by a high-ranking employee of Transas, which is developing an unmanned aerial vehicle (UAV), about the beginning of the development of a drone capable of not only conducting reconnaissance, but also delivering missile and bomb strikes.

- We received from the Ministry of Defense a technical task for a new drone. The device will be created on a modular design. Depending on the task, it will be possible to complete it - various types of reconnaissance, photo and video filming, observation of objects and patrols. Including, he will be able to carry weapons, the company's top manager told Izvestia.

Until now, the Ministry of Defense ordered unmanned aerial vehicles of small and middle class, intended primarily for reconnaissance. The only project of the Scat heavy drone drone, developed by the MiG design bureau, was shown as a mockup at the MAKS air show in 2007 and received no further development. A number of Russian companies were developing shock drone projects, but without a technical task from the Ministry of Defense, this work had no meaning.

- We could lead the development of such a UAV, we have all the resources for this. However, without a clear customer position, such work is simply economically unjustified, ”a senior Sukhoi employee told Izvestia.

The press service of the MiG "Izvestia" also reported that they are not working on the shock drone.

Commander-in-Chief of the Air Force, Alexander Zelin, stated that the UAVs would go to the troops by the year of 2020, experts believe that the first vehicles could be ready by the year of the 2016, then their tests would begin.

The developers did not disclose the technical characteristics of the new drone, referring to military secrets, but the chief editor of the UAV.ru Internet portal Denis Fedutinov told Izvestia that this device could compete with two types of foreign UAVs: the first with 800 – 1000 kg, and the second with 4,5 – 5 t.

“Here we can talk about medium-height vehicles of long flight duration, which, in addition to intelligence operations, are often used in the world and for shock purposes,” he explained.

Fedutinov recalled history the emergence of American UAVs of a similar class. Predato was originally created as an intelligence apparatus, but in subsequent versions was armed with two anti-tank missiles. The heavier version, the Reaper, was created as a percussion apparatus capable of carrying a greater number and range of weapons.

Predator developed a maximum speed of 217 km / h, the flight range was 740 km, and the ceiling was more than 18 thousand meters. In flight, the car can be up to 20 hours and carry 1360 kg of cargo. A Reaper is capable of flying more than 7 thousand km and carrying Hellfire air-to-ground missiles to 14. Russian developers will be guided by precisely these characteristics, according to experts surveyed by Izvestia.

According to Fedutinov, the main advantage of the UAV in comparison with tactical missiles is the ability to quickly respond to changing conditions:

- Having launched a rocket, it is impossible to promptly change the trajectory of its flight in the event of a change in the situation. A UAV, having reached the target, can conduct reconnaissance and supplementary exploration and deliver an accurate strike. Such devices are effective for defeating militant groups, especially when they move across areas with difficult terrain. In addition to missiles, they can carry bombs, affect not only manpower, but also equipment and shelters.

In addition to creating a UAV, much attention should be paid to the training of their operators, otherwise non-combat losses of equipment are inevitable.

- During the tests of Israeli drones at the site in Kolomna, at least five cars were lost. The generals wanted to play around with a joystick, although one of the advantages of a UAV is the ability to operate in a fully automatic mode, so they ended up having fun in the end.
Ctrl Enter
Noticed oshЫbku Highlight text and press. Ctrl + Enter
We are
Unmanned aerial vehicle Wing Loong (China)Russia will test the drone drone at the end of this year
40 comments
Information
Dear reader, to leave comments on the publication, you must to register.