November 30 2017
13
Initially, A.E. Evert wanted to tighten the Grenadier Corps to Ivangorod - using it to expand the bridgehead north of the fortress. But the directives of the commander-in-chief somewhat tied the freedom of his decisions.


After all, an offensive of two fronts was being prepared.

Initially, after the withdrawal of the army to the right bank of the Vistula, the commander-in-chief ordered A. E. Evert: “providing a section of the Vistula from the mouth of the r. Vilga to the mouth of the river. Ilzhanka, to act actively in order to keep the forces in front of him and prevent them from strengthening the northern group of troops. ”

September 30 N.I. Ivanov asked A.E. Evert to continue expanding the bridgehead on the left bank. On the same day, the directive No. 2118 assigned to the 4 army the “occupation of the r. The Vistula between Wilga and Vepř and striking the enemy operating in the Ivangorod district, Kozienice, is now aggressively developing actions to expand the bridgehead on the left bank in front of Ivangorod, Kozienice to deploy all the forces of the army and strike. " Guidance was given on measures to ensure the secrecy of the intended regrouping. The latter was reduced to a shift of the 4 th and 9 th armies to the north - for a more focused strike against the Germans from the mouth of the r. Pilica - Ivangorod in the south-west and almost southward.

On October 5, in connection with the transition of the 2 and 5 armies, the 4 army was ordered “on the whole front, especially in the area of ​​Kozienice - Ivangorod, to attract attention by demonstrative actions, but without resorting to private risky attacks before the collection of the necessary forces and to obtain a general directive to the armies of the front ".

It was found that the 9 Army can change the 16 Corps to October 4. The 16 Corps could arrive at its designated area near Zhitin by October 7. The Grenadier Corps was sent to the Laskarzhev region, Matseevice, where 3 of October could arrive.

On October 3, A.E. Evert, returning to his plan for bringing in new forces to expand the Kozhenitsky bridgehead, asked the commander-in-chief whether there were any obstacles to moving the 16 corps to the north and putting the grenadier into Ivangorod. At the same time, a weighty consideration was expressed to them - we must hurry with the deployment of the army on the left bank.

But at that time, N.I. Ivanov had a new plan for organizing the crossing of the Vistula - a group of corps of the 4 Army between the mouths of the river. Pilitsa and Radomka. Entering another corps (through Ivangorod) into the battle that had developed under Kozienice did not take place.

The position of the 17 and 3 of the Caucasian corps, therefore, became difficult, and 5 of October A. AE Evert saw fit to take Ivangorod with the 47 13th Infantry Division of the 16 corps (as a reserve).

Such decisions caused the following resolution of the commander in chief on the report of A.E. Evert: “the razbrytyvanie and the XVI corps in brigades begin. By the present beginning of the offensive operation of the entire 4 army, only three brigades will probably remain fresh. This is pessimistic, but unfortunately true. Ivanov. "

October E. 6 had an interesting, but opposite to the previous, idea of ​​withdrawing one of the two corps fighting there from the left bank - for use on the free flank. This thought did not meet with objections from the commander-in-chief (he also cultivated it on the front-line scale). But this was not easy to implement: both corps were in close contact with the enemy, and it was difficult to get them out of battle.

As soon as the decision was made to transfer the 4 Army corps to the north, reconnaissance of the ferries began. From October 3, the commander of the Grenadier Corps was entrusted with the leadership of the construction of four bridges on the Vistula. The condition is not to attract the attention of the enemy.

On October 10, the army headquarters instructed the headquarters of the Grenadier Corps to organize a crossing at several points simultaneously (to ensure the success of the forcing) in the area of ​​Tarnow and Kobylnitsa. To facilitate the crossing of the grenadier, the 5 and 81 infantry divisions were assigned to produce false crossings (demonstrations). 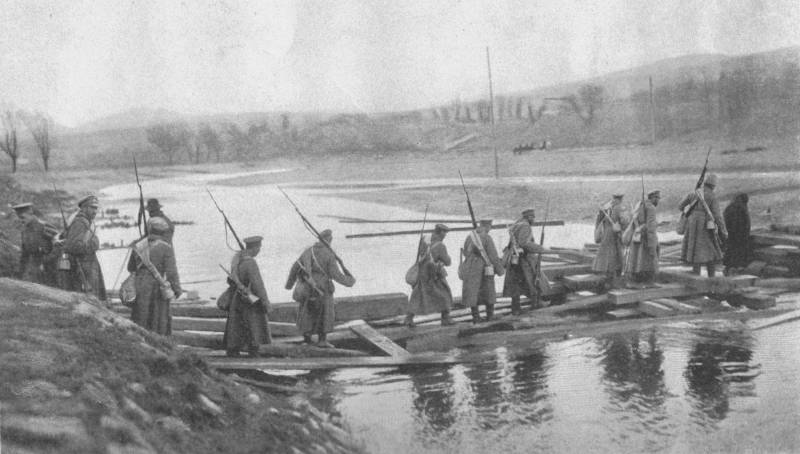 16. Crossing the river. The great war in the images and paintings. Issue 3. From the author's library

It was proposed to actively use at the crossings of the searchlight - to demonstrate and dazzle the enemy.

It was decided to build the bridge north of Przewoz. Work at Tarnov was carried out under the supervision of the chief of the 81 Infantry Division, holding the defense on the Vistula.

Ropes and anchors were still traveling from Brest, while boards, nails, iron, ropes, wire, etc., were found in Sobolev.

On October 4, A.E. Evert informed the higher command that the water had risen, the current was very fast and two pontoon battalions were not enough. The raft logs were procured for one bridge, and there were still not enough anchors and ropes.

On October 6, the army headquarters sent a sapper of the 6 corps and 16 transports to help builders of 5 ferries of platoons. The 3 th engineer battalion and searchlights of the 3 Caucasian and 16 army corps were sent to the Garwolin area.

It was also decided to build 6 small and large raft bridges.

According to German sources, in the days of the Battle of Ivangorod, when M. Galvitsa's group moved north, the Guards reserve corps with the Austro-Hungarian 3 Cavalry Division and the 20 Army Brigade remained between Pilitsa and Radomka, meeting a blow from the Russian XNUM th army. Corps R. Voirsh fought west of the 4 Army Corps; The 20 Army Corps was thrown over the left flank of the German 11 Army; and against Ivangorod and to the south, the Austrian 9 Army entered into battle.

On October 6, the commander-in-chief transmitted to the commanders his preliminary order outlining a new plan of action: in view of the difficulties in the already tested directions, to organize the crossing at either Tarnov or the mouth of the river. Guili Kalwaria, or, with the slow development of the 5 army offensive, send three corps to the Garwolin area: Grenadier, 16, and Guards with the pontoon means of the 4 army, reinforcing them with the pontoon battalions of the 9 army. The listed troops are to subordinate A. E. Evert. It was wished that the avant-garde corps began the crossing on the night of October 10. The rest of the troops and the fortress of Ivangorod were to be transferred to the command of the general of the 9 th army General of Infantry P. A. Lechitsky. Since the adoption of this plan was associated with the temporary occupation of the area of ​​the North-Western Front, these considerations were presented to the Supreme Commander.

The latter basically approved the plan, with the exception of the direction to the north of the Guard Corps (it was left as part of the 9 Army near Ivangorod).

The final directive on the armies of the South-Western Front of October 6 No. 2299 established that the right-flank armies (4 and 9) should attack the front of Vysmerzice, Radom, Senno, Zavikhost, conforming movement with the armies of the North-Western front. Thus, the 4 Army was not free to maneuver. The commander-in-chief demanded that the 4 Army "develop the strike with its right flank especially vigorously." It was indicated that by the time of the approval of the left flank of the right-wing 5 Army near Varka (on the Pilitsa River), the 4 Army should reach the front of Grabov, Glovachev, Zvolen. In accordance with this, the 4 Army was ordered: in the morning of October 7 be sent to the Garwolin District Grenadier and 16 Corps with army pontoon vehicles. After the crossing, these compounds were supposed to strike at the flank and rear of enemy units fighting in the Kozienice region. The 9 army was aiming to the left of the 4 for the Radom-Zvolen front.

October 7 commander P. A. Plehve, concerned about the fate of his former 5 corps fighting under Kozienice, suggested to A.E. Evert the idea of ​​crossing the 17 corps at Pavlovice. It helped to gain time. The same flowed from the conversation of A E. Evert with the command of Ivangorod fortress, who was concerned about the long stay of a dangerous enemy under the fortress. 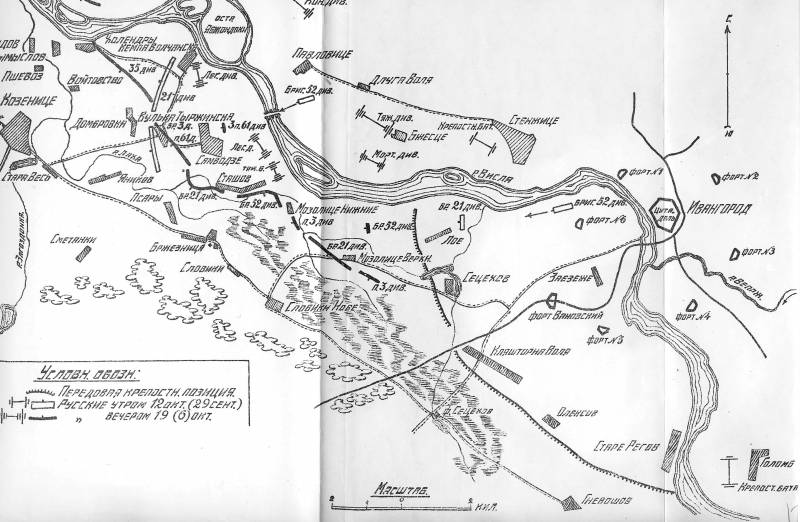 On October 8, the commander 4 ordered the 17-th and 3-th Caucasian corps to launch a decisive offensive in the area of ​​Kozienice, the Grenadier Corps, to prepare for crossing the Vistula and erect a pontoon bridge on the night of October 10. The crossing at Tarnov was to begin on October 9.

The 16 Corps was to start the crossing at Pavlovice. The Trans-Baikal Cossack Brigade was ordered to cross at Tarnov on the floats.

The commandant of the Ivangorod fortress also identified a strong detachment (consolidated division) for the offensive.

On October 10, the commander gave the order to the 16 corps to go to the right (north) of the 17 (the latter was targeting Radom). The 3 Caucasian Corps was supposed to reach the Skaryshev region - Radomskoye Highway, the Grenadier Corps - to advance with the 16 Corps in the strip between the r. Nova Volya - Xavier - line and line

The main forces of the 16 and 17 corps, the Ural Cossack Division and the heavy artillery crossed the bridge at Pavlovice. At the same time, the 10 battalions of the 41 Infantry Division, and the 2-I separate telegraph company of the 17 Corps, regimental kitchens and the Orenburg Cossack regiment, crossed the XNUMX battalions on the steamers. 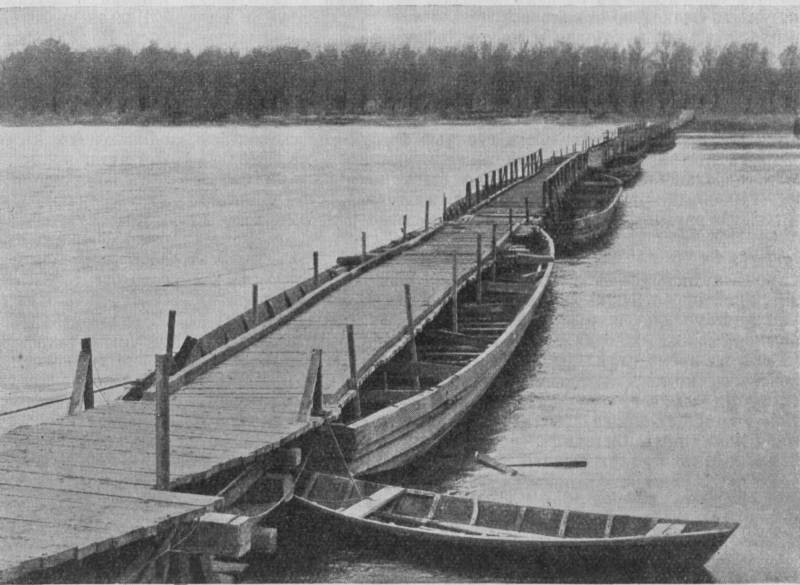 On the night of October 10, after building a bridge near Skurce (north of Tarnów), the Grenadier Corps was to begin the crossing. The three pontoon battalions (7, 8, and 9) were supposed to send the vanguard first, and then build a bridge. The preparation was thorough. Thus, the corps order signed the capacity of the pontoons (for 30 people each), contained instructions on the observance of silence, the shooting from the pontoons was prohibited.

The avant-garde crossed on the pontoons, and for a long time it was impossible to build a bridge. In order to meet the deadlines, three incomplete pontoon battalions (which also had a heterogeneous materiel) were not enough. The bridge was put under the morning of October 10.

Since the Trans-Baikal Cossack Brigade was unable to cross the Polyansky floats near Tarnov, it had to be let through the bridge first. Behind it crossed the river two Orenburg Cossack regiments.

The Trans-Baikal Cossack Brigade behind Grabov met with stubborn resistance from the Austro-Hungarian cavalry with the support of artillery. The resistance of the enemy was broken.