November 23 2017
55
Uralvagonzavod (UVZ), part of Rostec, has launched a contract to supply the Russian Defense Ministry with a batch of support combat vehicles tanks (BMPT) “Terminator,” Vyacheslav Khalitov, deputy head of UVZ for special equipment, said in an interview with Interfax on Thursday. 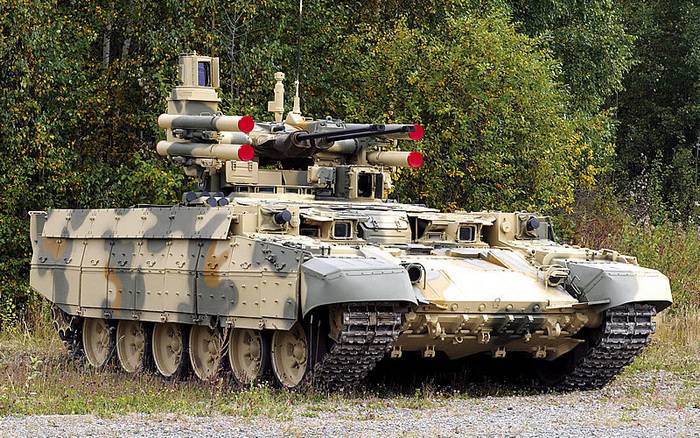 Indeed, at the “Army” forum a state contract was concluded for the supply in the interests of the Ministry of Defense of Russia of a batch of combat vehicles supporting tanks BMPT. The company has started the implementation of this contract.
- he said.

In September, Rostec reported that Uralvagonzavod would supply the Russian Armed Forces next year over 10 BMPT Terminator.

BMPT "Terminator", which will receive the Russian army, will be at the nodes and aggregates of the main tank T-90A.

"Terminator" is a multi-purpose, highly protected combat tracked fire support vehicle with powerful weapons, advanced fire control devices and high maneuverability. It is intended to suppress and destroy enemy tank-dangerous manpower, including those located in shelters. "Terminator" is capable of hitting lightly armored targets, tanks and infantry fighting vehicles, together with military air defense can fight with helicopters and low-flying low-speed aircraft of the enemy.

Ctrl Enter
Noticed oshЫbku Highlight text and press. Ctrl + Enter
We are
Innovation Day of the Southern Military District: the main battle tank T-90AV. Khalitov told about the Armata project
55 comments
Information
Dear reader, to leave comments on the publication, you must to register.