European concentration camp in The Hague

November 23 2017
36
22 November, The Hague. The building of the so-called International War Crimes Tribunal in the Former Yugoslavia (ICTY) is a company of aggressive Bosnian Muslim women. They require one thing - a massacre of a Serb. Over seriously ill General Ratko Mladich, who long before this day was declared one of the main "war criminals."


In addition, the building is suitable for a young man with a Serbian flag. He is trying to use the right to democracy and express his point of view - to speak in support of the disgraced general. The enraged elderly Bosnian fury shows him what a “democracy” is - trying to break the flag, starting a fight. The police come up and lead a person who is in agreement with the Serbs. Democracy is only for the elect. Here, in civilized Europe, you can only demand reprisals ... To speak in defense is impossible.

Massacre does not take long to wait. The drama continues in the building itself, which has been going on for quite a few years. General Ratko Mladić becomes ill. The Tribunal announces a break. After graduation, Mladic, gathering his last strength, says: "This is all a lie, this is a NATO court!". “The most democratic tribunal in the world” makes a decision: to expel the defendant from the courtroom. The sentence read out in his absence. The verdict is harsh: life imprisonment. 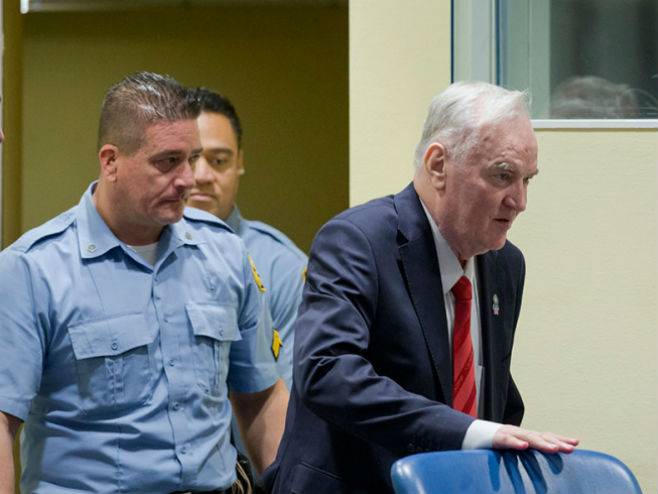 This is the sixth such sentence. And they are all handed down to persons of the same nationality: the Serbs. It is to them that the court adjudicates the harshest sentences: if not life imprisonment, then - tens of years in prison. Huge terms, which are unrealistic to survive.

Thus, the Bosnian Serb leader Radovan Karadzic was sentenced to 40 years of imprisonment. The President of Serbia and Yugoslavia, Slobodan Milosevic, who was able to competently, clearly and confidently refute the accusations against him, did not live to see the sentence, having died under very strange circumstances (manipulating prison “doctors” with his health so far unpunished). Now the judicial retribution has been committed against Ratko Mladić, the commander of the Bosnian Serb army.

The imposition of the sentence had already been arranged in advance by such an entourage that it was difficult to hope for the slightest objectivity. «Any sentence other than life imprisonment will be an insult to the memory of the victims, both living and dead, and the humiliation of justice"- so stated the prosecutor of the ICTY, Alan Teager. Another prosecutor, Serge Brammertz, said that the sentence would be "a solution of epochal importance».

Thus, whatever the accused says, whatever arguments the attorneys bring, whatever the witnesses assert, the decision was already written in advance, and the entire judicial farce was only to be stamped.

Long before 22 in November of 2017, and even long before the beginning of the trial, Mladić was spoken of as one of the most important “villains”. And, although in the Balkan conflicts of the mid 90-s three parties participated - Serbs, Croats and Muslims, but only one of them was utterly demonized: the Serbs. They were completely deprived of the right to self-defense, while their killings are not even considered crimes.

So, a month and a half ago in Bosnia acquitted one of the main killers of the Serbs - Bosnian Muslim Naser Oric. However, it is impossible to consider the actions of the Bosnian Serbs in the same Srebrenica in isolation from the actions of such as Naser Orić and other thugs, from whom they had to defend themselves.

In early November, Mladic’s defense asked to postpone sentencing and allow doctors to examine the defendant. It would seem that this is a reasonable request, and the elementary principles of humanism require it to be implemented. But…

European "democratic" tribunal ... banned access of doctors to Mladić. With the wording that it is (visiting doctors) - bad for his health! A statement worthy of, perhaps, Auschwitz or Treblinka! Perhaps the Hague judgment even surpassed the Nazi concentration camps in this matter and in this formulation.

«We believe that the ICTY specifically creates barriers to the physical“,” Said Mladic’s son Darko, adding that his father’s condition had deteriorated greatly. These are several new strokes.

Serbian President Alexander Vucic spoke about his concern about the state of health of Mladic during a recent meeting with the ICTY chairman Carmel Agius. The Russian Foreign Ministry, for its part, appealed to this “court” with a proposal to temporarily release the general and send him for treatment in the Russian Federation. The result is a failure. Russian Foreign Ministry spokeswoman Maria Zakharova then said: “Concern over disregard of the tribunal’s fundamental rights of defendants».

The outcome of this was the November 22 massacre of the year 2017. And she is very pleased with the UN High Commissioner for Human Rights Zeid Raad Al-Hussein. He called this cruelty "historical victory of justice", And the defendant"the embodiment of evil". The violation of the rights of a specific person - Serb Ratko Mladic, the failure to provide him with medical assistance - the UN High Commissioner for Human Rights, does not seem to concern.

How do you sleep, Mr. Tadic, and all the others, who betrayed the general, the commander, and finally the fellow — to a modern concentration camp? Issued for financial assistance and a satisfying European future? Judah money not yet burned pocket? On your conscience - the terrible suffering of a person, to whom they did not show even the slightest humanity, did not allow doctors, and on the day of the announcement of the unthinkable sentence - they also staged an additional act of arbitrariness.