Arctic arithmetic: when three is more than six 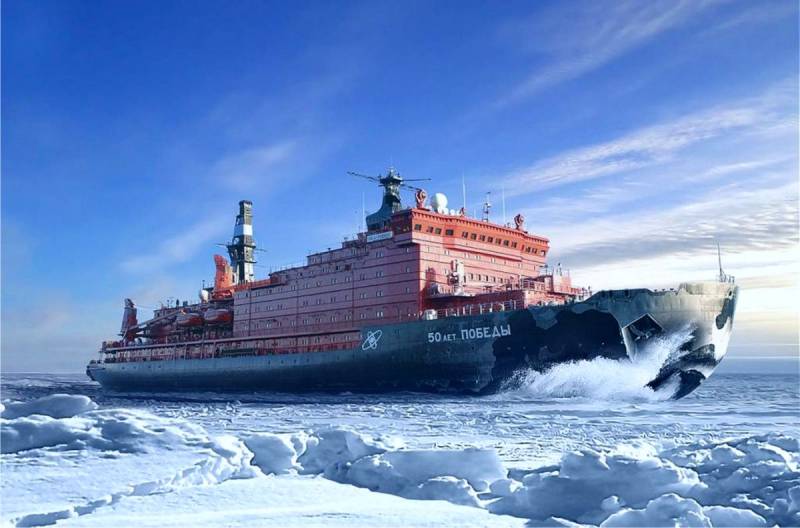 At the time of the collapse of the USSR, its fleet had six nuclear-powered icebreakers. At the same time, the cargo turnover on the routes of the Northern Sea Route (NSR) was 7,6 mln. Tons. Today, they are being replaced with only three new “Arctic” 22220 projects, which will be able to provide much greater freight traffic along the northern sea routes.

In 2017, more than 8 million tons of cargo will be transported along the SMP along the routes, and then the growth will be exponentially. Thus, despite the sanctions and the crisis, the Russian program for the development of the resources of the Far North is coming to the finish line and will become a very important driver of economic growth.

But not so long ago everything looked very sad. In 1990, after the collapse of the USSR, the annual cargo traffic by the routes of the Northern Sea Route fell to miserable 1,5 million tons, and it seemed that a little more, and the potential of the Russian Arctic could be forgotten for a long time.

Norilsk Nickel is the savior of Atomflot, Russia

4 November 1989 of the Year The Council of Ministers of the USSR adopted a resolution on the creation of a state-owned concern for the production of non-ferrous metals “Norilsk Nickel”. And even earlier in Finland two unique nuclear icebreakers were built, the main task of which was to work in the mouths of Siberian rivers.

The fact is that in the mouth of the Yenisei in some places the depths were just 10 meters, and the draft of the serial Soviet atomic icebreakers "Arktika" was up to 11,5 meters.

And therefore, to ensure year-round operation of the plant, there were only two ways: either deepen the bottom of the Yenisei, or build three new nuclear-powered icebreakers with a draft of no more than 9 meters. They thought it was cheaper to build ships ... However, only two managed to be built before the collapse. It was “Norilsk Nickel” that became the main client of Atomflot in the most difficult years (1990 and 2000). Thanks to him, he survived.

Today everything is completely different. The economic development program of the Arctic region is a priority. Today there is no shortage of contracts. On the contrary, already approved and implemented plans suggest a sharp increase in freight traffic along the NSR in the next year or two.

According to Stanislav Golovinsky, Deputy General Director for Atomflot Development, a contract has already been signed with Yamal LNG for the export of 17,5 million tons of cargo per year. All the gas from this project for more than twenty years ahead has already been contracted.

An agreement was also signed with Gazprom Neft for the annual maintenance of 8 million tons of cargo.

The development of the Taimyr coal basin with a total stock of high-quality coal in 185 billion tons looks very promising. The first posting of the bulk carrier took place in February — March of the current year. Already today there is a firm agreement with the Vostok-Ugol company to export up to 10 million tons of coal (with a prospect of up to 2030, to increase volumes to 30-50 million tons) and smaller contracts. And still it is necessary to provide large-scale construction projects and the rapidly growing population of the region.

Thus, already after 2030, the icebreaking fleet of Russia must provide at least 60-70 mln. Tons of cargo, or maybe all 100 mln. Tons. How to achieve this?

A twig to a twig - it turns out a broom 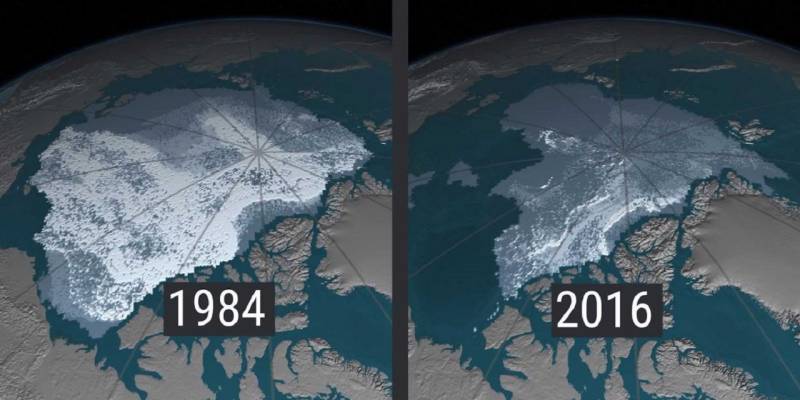 The first point can be called "God to help." Global warming over the past decades has drastically reduced the area and thickness of the Arctic ice fields. Today it is quite possible to consider the zone to the Taimyr Peninsula as an area with year-round navigation. 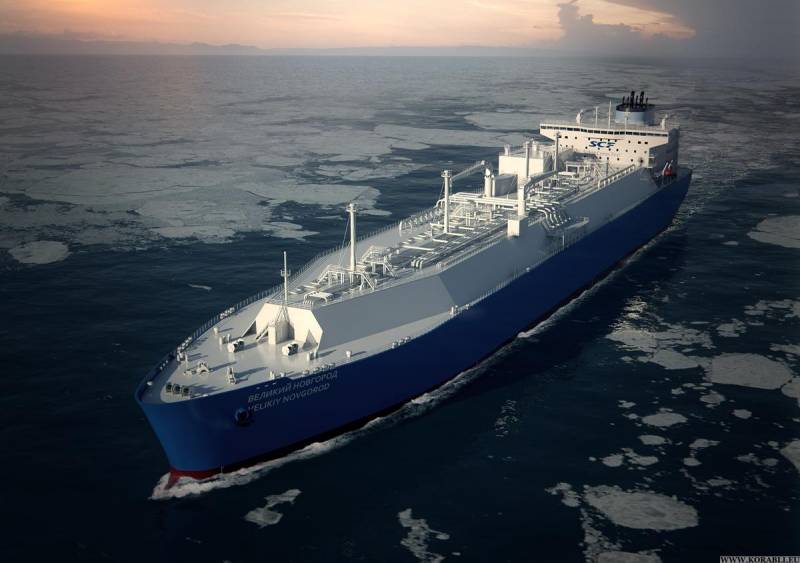 Point two. Construction of special merchant ships. Today, Russian companies operating in the Arctic are intensively updating their merchant fleet. They give priority to ships of special construction, which at least part of the time of the year can do without the help of icebreakers (classes arc4, arc7, etc.). 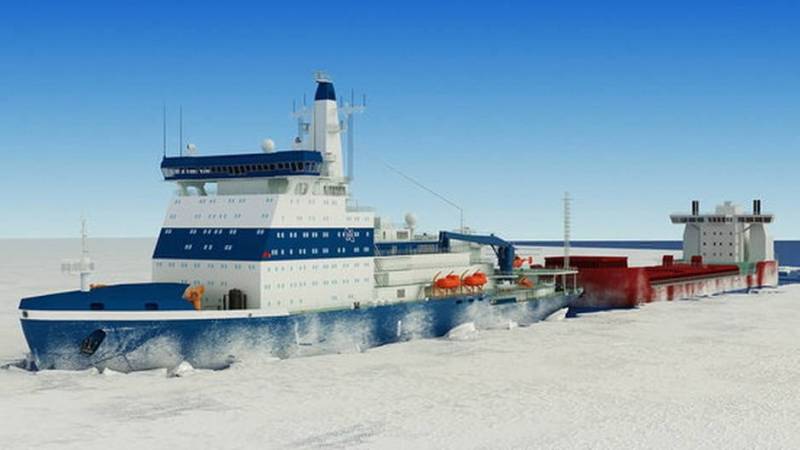 The nuclear-powered icebreaker “Arktika” of the 10520 project and the nuclear-powered icebreaker “Arktika” of the 22220 project, having almost the same power, are very different from each other in their main parameter - the ice permeability. At the speed of the 1-2 node, the first can overcome the ice with a thickness of 2,6 meters, the second to 3 meters, and at the speed of 5 nodes, these figures will be 2,25 and 2,6 meters respectively.

At the same time, the Taimyr icebreakers are even weaker. At the speed of the 2 node, he can overcome the ice with the thickness of the “total” 1,77 meter. And with a run-up no more than 2,1 meter.

That is, the same ice fields, new icebreakers can pass much faster. At the same time, 22220 vessels are universal and can change their draft if necessary. When they need power, they fill ballast tanks and crush ice of maximum thickness. When they need to enter the shallow waters, the tanks are emptied and their draft does not exceed the 8,5 meter needed for work in the mouths of Siberian rivers.

In addition, the width of the channel being laid has also grown, along which merchant ships following them (from 29 to 33 meters) will be able to follow the icebreakers. And this is a sharp increase in the deadweight of vessels served. As a result, only a change of generations of Russian nuclear icebreakers will increase the number of cargoes transported with their help several times.

The development of an even more powerful Leader icebreaker (120 MW), which is intended for transit pilotage of ships from the Pacific Ocean to the Atlantic, is now being completed. At the same time, ice fields with thickness up to 2,5 meters will be covered at the “cruising” speed of 11 knots.

New Russian diesel-electric icebreakers are not far behind their stronger brethren. Now in St. Petersburg, albeit with problems, but the construction of the lead ship of the 22600 project "Viktor Chernomyrdin" (with a capacity of 25 MW) ends. It also, as in the project 22220, laid the "universality". The ship has a lot of innovative solutions that allow it to work even in heavier ice than it leaves in history nuclear icebreakers "Taimyr". At the end of the tests and when confirming the declared characteristics, the series can be increased to five units. 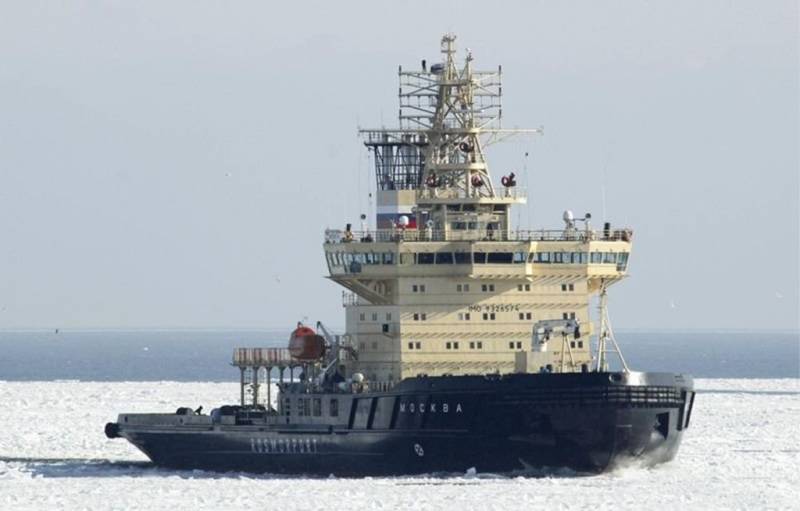 A little earlier, a series of icebreakers of the 21900 “Moscow” project were built, which, having the power of “all” 15MW, are able to overcome ice with a 2 node speed up to 1,5 meter thick.

Total: by 2030, the Russian “group” of linear icebreakers will consist of at least three (or four) nuclear ships and up to ten diesel-electric ones. It will be one or two less icebreaker than during the collapse of the USSR (six + nine), but due to the growth of their capacity and other factors, this will increase the volume of freight traffic in the Arctic by almost ten times.

This is the arithmetic that comes out ...

Ctrl Enter
Noticed oshЫbku Highlight text and press. Ctrl + Enter
We are
In the Arctic, the unique wiring of a detachment of ships of the Northern Fleet by four atomic icebreakersRussia may lose its monopoly on the Northern Sea Route
36 comments
Information
Dear reader, to leave comments on the publication, you must to register.