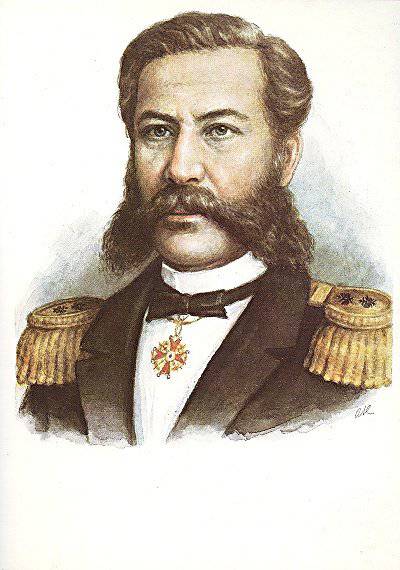 On the first day of sunny April 1890, Rear Admiral Alexander Fedorovich Mozhaisky died. An extraordinary person, a military leader and inventor left in stories Russia has a noticeable trace. His biography, cited today by researchers, is fragmentary and contains almost no data about childhood and adolescence.


Alexander Fedorovich was born in the city of Rochensalm of the Vyborg province of the Principality of Finland into a family of hereditary sailors on March 21, 1825. His father Fedor Timofeevich Mozhaysky was a glorious admiral of the Russian fleet. The boy was baptized, as usual, early and his godfather was the port commander commander Stepanov I.G. That's all that the author managed to find about the childhood of such a famous person. It should be noted that Rochensalm was an important strategic point on the map of the Empire, since the territory of all of Finland, which left Russia after the war in 1809, was desolate. During this period, political prisoners were exiled to the outskirts, and Rochensalm was no exception. There were no decent educational institutions for young Mozhaisk in the Vyborg province, so the boy was assigned to be brought up in the naval cadet corps of the city of St. Petersburg.

In Russia, it was the only military school that trained naval officers. Only children of generals, officers and nobles were accepted as disciples. Graduates of this institution were famous Russian naval commanders, such as: Ushakov FF. Kruzenshtern I.V. Nevelsky G.I. Bellingshausen FF Nakhimov, PS, Lazarev, MP Putyatin E.V. More than 250 geographical objects are marked on the world map, which were opened by graduates of the corps, or were named after them. Students in the lower grades were called cadets, and in the older classes they were called midshipmen.

Graduated from Mozhaisk 19 January 1841, with excellent grades and characteristics. According to the results of training, Alexander Fedorovich was promoted to midshipman. He received his first appointment to the fleet and went on ships across the expanses of the White and Baltic Seas. Seven years of faithful service were rewarded with the rank of lieutenant in 1849. In the Baltics, Alexander Fedorovich served in the military until the 1852 year.

In 1853 -1855, Mozhaisky took part in a diplomatic expedition of Kronstadt-Japan, the purpose of which was to establish trade relations with the country of the Rising Sun. The emperor hoped to strike up relations with the Japanese before the Americans. The expedition began on the frigate Pallas, but the state of the vessel was unsuitable for traveling on the ocean, so the frigate Diana was soon sent, and the crew continued their journey on it. The frigate was well armed and could provide a repulse to the pirate ship, there were 52 guns aboard the Diana. However, in December 1852, the frigate was severely damaged by an earthquake and tsunami in the port of Shimoda. While trying to tow the ship for repair, the Diana sank in Kheda Bay.

The crew, having lost the ship, was forced to settle in one of the Japanese villages. The Russians took an active part in the restoration of buildings destroyed by the elements, as a result of which they endeared themselves to the local population. February 7 signed the Simodsk treatise, according to which friendly trade relations were established between the Russian Empire and Japan, and three Japanese ports were opened to the Russian ships. The crew, with the assistance of local authorities and the public, was able to build a new vessel, on which Mozhaisky returned to his homeland.

In Japan, the ship was built for the first time according to the European model, it received its name from the name of the bay, in which the Russian frigate 14 was sunk on April 1855, the Kheda was launched, loading fresh water and supplies, the crew boarded and headed for Russia. Later, the schooner was transferred to Japan, where many more ships were built in the image of it.

During the period of stay among the local population Mozhaisky carefully studies the life, customs, customs, and also writes pictures. Alexander Fedorovich was a very versatile person. Painting has become one of his favorite activities since his youth. Upon returning to their homeland, about twenty canvases of Japanese subjects were presented to them.

Since 1855, Mozhaisky has been assigned to the Baltic Sea for a brig called "Antenor". Here he cruised the shores of the Gulf of Finland, protecting the territory from invasion. In 1858, Alexander Fedorovich went to the Khiva expedition, where he had the perfect opportunity to explore and describe the Aral Sea and Amurdarya. For a successful assignment, Mozhaisky is promoted to senior officer and continues to serve on the 84-gun ship with the proud name "Eagle." Already in the 1859 year, Mozhaisky was given the rank of lieutenant commander and entrusted with the command of the new vessel "Rider".

In 1860, the active civic activity of Alexander Fedorovich begins. He marries the noblewoman Lyubov Kuznetsova and obtains the position of a candidate mediator in the Vologda province and settles in a small village of his young wife called Kotelnikovo. Three years later, Mozhaisky resigns as a result of a reduction in the number of staff after the Crimean War.

An energetic person, a lover of art, Mozhaisky participates in the organization of the first ethnographic exhibition in Moscow, the program of which was claimed by Emperor Alexander 2 himself. He provided his trophies from the expeditions for the exhibition. “Peoples of Russia”, the name of the event, was held 23 April 1867.

However, the civil life of Mozhaisky did not last long, already in 1879, in the rank of captain of the first rank, he was again enlisted in the naval service. He is appointed a teacher in the Naval Cadet Corps, where Alexander Fedorovich willingly passes on his knowledge and experience to the younger generation. In addition, Mozhaysky received the opportunity to communicate with eminent domestic scientists. Consultations were required for Alexander Fedorovich to create the first aircraft, which would be heavier than air.

The idea of ​​building such a device appeared in Mozhaisky back in the 1855 year, when he had been watching the free flight of seabirds for a long time. For a long time he studied the principle of operation of propellers and even twice rose into the sky with the help of kites of various designs. After much deliberation, research and discussion, Mozhaisk finally began designing in the 1876 year. The first model of the aircraft was driven by a spring, had a fuselage in the shape of a boat, wings and three screws. One screw was on the nose of the aircraft, and the other two were embedded in the wing structure.

Based on studies of swallows and other fast-flying birds, Mozhaisky concludes that the best configuration of the wing is a pointed configuration. Observations and experiments with pigeons push the inventor to the idea that the plane would need a “takeoff” to take off. Gradually, Alexander Fedorovich understands that the wing of the aircraft must be stationary, inclined at a certain angle to the horizon, and also equipped with special motors.

In November, 1881 of the Year, Mozhaisky received the first Russian patent for the invention of an aircraft, more precisely, an “airborne projectile,” as it was then called. To implement his project, the designer spent all the savings and even laid wedding rings. He helped him in the construction and testing mechanic Ivan Golubev. Alexander Fedorovich created his aircraft, while in the Red Village, equipping it with two steam engines. However, the power of the 10 and 20 of the engine horsepower is not enough, and the type of engine is selected incorrectly. Flight tests ended unsuccessfully, the car could not fly, although for some time it still got off the ground. When falling, the car damaged the wing, and the tests stopped. 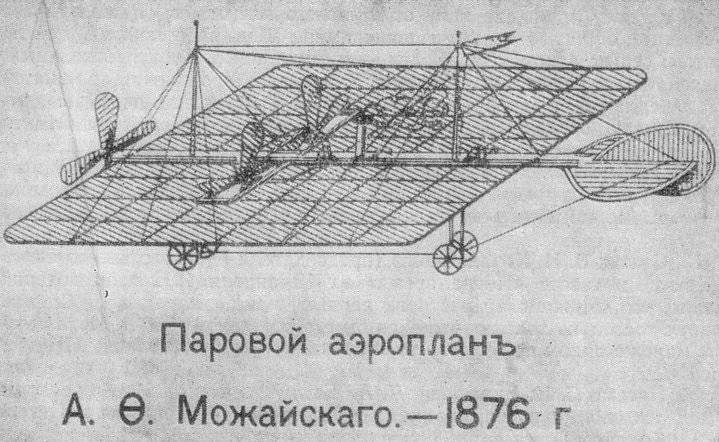 Mozhaisky was the first to use a fixed wing in the design of an aircraft; moreover, he was the first to propose a version of an aircraft operated by man. It was Alexander Fedorovich who established the existence of a dependence of drag and lift. The distinguished engineer-shipbuilder PA Bogoslovsky spoke positively about his developments, referring to Mozhaiski as a gifted inventor who solved many issues of aeronautics. However, further development needed a lot of money, which the former sailor did not have. The government did not consider it necessary to support the inventor, and his plans remained unfulfilled, and the calculations were incomplete.

The next title of Mozhaisk is assigned in the 1882 year, and a little later he gets his last title of Rear Admiral. Alexander Fedorovich died in 65 years, was buried in the Smolensk cemetery in 1890 year.

Ctrl Enter
Noticed oshЫbku Highlight text and press. Ctrl + Enter
We are
Russia's struggle with Swedish revanchism at the end of the XVIII century. Rosensalm and VyborgBecome solid at the sea. Fedor Fedorovich Ushakov
Military Reviewin Yandex News
Military Reviewin Google News
10 comments
Information
Dear reader, to leave comments on the publication, you must sign in.