November 20 2017
16
That day there is an active discussion of the negotiations of the special representatives of Russia and the United States of America on Ukraine. The main topics of the talks, raised during the meeting of Vladislav Surkov and Kurt Volcker in Belgrade, are the possible parameters of the peacekeeping mission in the Donbas. It is stated that Volker brought 29 points to Belgrade telling about “the possibility of resolving the conflict”.


Surkov in an interview after talks with his American counterpart noted that Russia "can arrange only three points out of those presented."
After the meeting of the Russian and American special representatives in the capital of Serbia, the Ukrainian press announced that the parameters of the peacekeeping mission were supposedly “practically agreed”, and even presented several points of the “joint plan” of the development of the situation.

Among the points there are:

1. Entering a peacekeeping mission is not on a specific site in the Donbass, but on its entire territory. The peacekeepers, as noted, will stand both on both sides of the contact line, and on the territory of “individual districts of Donetsk and Lugansk regions” (this is what the LDNR is called in Kiev).
2. The holding of local elections on the basis of the law of Ukraine "On Special Status".
3. Providing Ukrainian troops with access to the border with the Russian Federation.

At the same time, the Ukrainian side defines these points as “priority”, simultaneously waving off the possibility of creating a peacekeeping troop group at the regional level. That is, Kiev does not want to “see” either Belarusian, Russian or Polish servicemen in the conflict zone, declaring that the contingent should be formed on the principle of “neutrality” by the relevant United Nations structures. That is, peacekeepers from the armies of countries remote from the region both geographically and politically.

In general, these Ukrainian aspirations, supported by Volker, look quite healthy - if peacekeepers are to be introduced, they really should be impartial in relation to what is happening in the Donbas. So, the United Nations, with the approval of the peacekeeping mission by the Security Council, could compose a mission of the soldiers of Asian and African states. Whatever. Transparent. Modern. 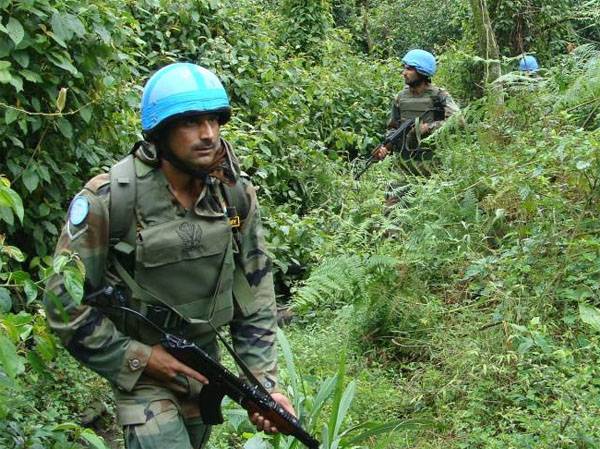 The photo - UN peacekeepers in Africa

However, this offer has a second bottom. What is it?

First you need to turn to stories peacekeeping missions. Namely, to the history of those missions, Washington showed an interest in introducing these or those points of the planet. One of these missions is the Balkans, Kosovo. This is where the Americans acted, what is called, with tripled energy. What this mission ultimately led to is well known to everyone - not just to tear the edge of Kosovo away from Serbia, but also to get the Serbian population living in Kosovo, in fact, into the zone of NATO occupation. It is important to note that the peacekeepers in Kosovo are mostly NATO soldiers, who, of course, “by chance”, do not consider it necessary to counter radical Kosovars (Albanians) during their attacks on Orthodox churches and Serbian transport routes. But how actively the NATO "doves of peace" "pacified" the Serbs ...

Based on these facts, it would seem beneficial for the United States and Kiev to promote precisely peacekeepers with a large presence of the NATO military. But no. Indeed, in the United States they have become accustomed to examine each particular case exclusively through the same prism. This is a prism of American interests. Kosovo had to finally be torn off from Serbia - they introduced the NATO mission under the guise of an international peacekeeping contingent. Donbass, on the contrary, by all means wants to fit under the Maidan protectorate, which implements all the same American interests. And this means that the Kosovo “peacemaking” scenario is no longer suitable for the United States.

But from the American point of view, it is the neutral contingent that can be tried to disperse across the territory of Donbass right up to the Russian border. For what? Americans seriously expect that the "blue helmets", for example, from Nepal, Algeria and Sri Lanka will provide lasting peace in the Donbas. Of course not. The world at the Russian borders is by definition not part of American interests. Then why is the United States so actively promoting the idea of ​​peacekeepers "throughout the territory"? On this occasion there are considerations.

The fact is that it is the neutral peacekeeping contingent that can ultimately be made a sacred sacrifice. Washington, and under Obama, and under Trump, realizing that Russia could not be drawn into the war against Ukraine, is changing tactics. And this tactic is in the old “good” provocation: in order to shift all responsibility for the civil war in Ukraine onto other people's shoulders, they are looking for an object that would ultimately play the role of a sacred victim without knowing it. It did not work with the Malaysian "Boeing", decided that you need to try with the "holy of holies" - peacekeepers.

Moreover, the United States already has a puncture experience - the case when a lover of gastronomic red ties in Georgia solved the task set for him too clumsily by ordering shelling of the positions of Russian peacekeepers. That is why the United States and Ukraine are now shaking their hands and feet off the idea of ​​deploying the Russian military contingent in the Donbas (as part of the UN mission). They will not go to Belarusian either, understanding that the Russian Federation and the Republic of Belarus are located in the Union State, as well as the CSTO. Any provocation against Russian or Belarusian peacekeeping contingents can cost Kiev the way. Saakashvili will not lie ...

But a completely different thing is the UN neutrals. They are something American planners are ready to set as the sacred sacrifice. CNN, BBC, Reuters and others are already preparing for “fried” reports about how “pro-Kremlin forces in the Donbass fire at not only civilians, but also UN peacekeepers operating in full compliance with an international mandate.” Moreover, it is important for the West to promote its version of the idea with peacekeepers until March of 2018. This is in addition to the provocations regarding the possible removal of the Russian team from the Olympics in South Korea.

The US haste is visible, as they say, to the naked eye. Volcker stepped up so that the next meeting with the Russian special representative is being prepared. They understand that they may be late, and therefore they can now make certain concessions in order to realize their ultimate idea in the Donbas.

What to expect if the provocation does take place? The answer is obvious: the cries about the tribunal at The Hague, about the incredible “toxicity” of Russia, which is killing peacekeepers, that “you see, they also shot down Boeing,” that it’s time to sweep away the regime. This is all to the fact that some experts in Russia began to argue that the United States has lost all interest in Ukraine ... Not at all. US interest will remain as long as Ukraine can at least try to put pressure on Russia. But does not anyone think seriously that Washington is promoting the idea of ​​peacekeepers in the Donbas for peace near the borders of the Russian Federation - taking into account the anti-Russian hysteria that prevails in the US elites?

Ctrl Enter
Noticed oshЫbku Highlight text and press. Ctrl + Enter
We are
Situational analysis of the death of the MH17 flight (Malaysian Boeing 777), made on the basis of engineering analysis from 15.08.2014Results of the week. “In our cooperative, the board is always agreed”
Military Reviewin Yandex News
Military Reviewin Google News
16 comments
Information
Dear reader, to leave comments on the publication, you must to register.