Maidan in the capital of NATO 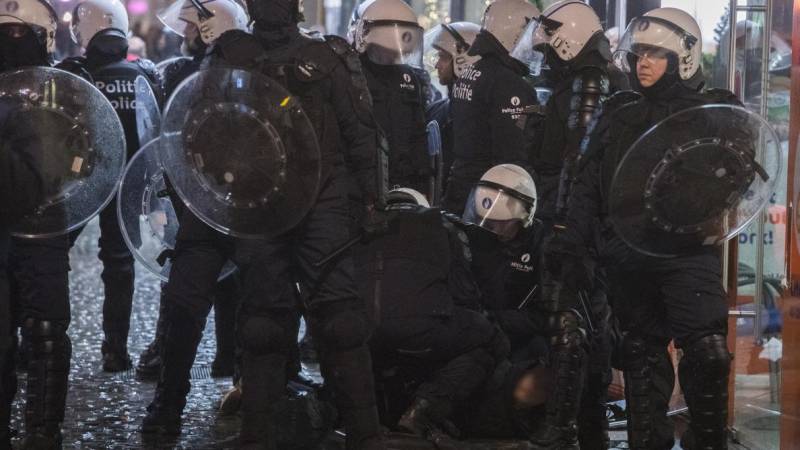 After the undoubted success of the United States in organizing the "Arab Spring" in the states closest to Europe and the "democratization of dictatorial regimes" in some of them, the number of Muslims in the EU sharply jumped. And they settle compactly and mainly in the capitals of the EU.

With a population of the capital of Belgium in 180 thousands of people - 45 thousands of them Muslims. Compact living! 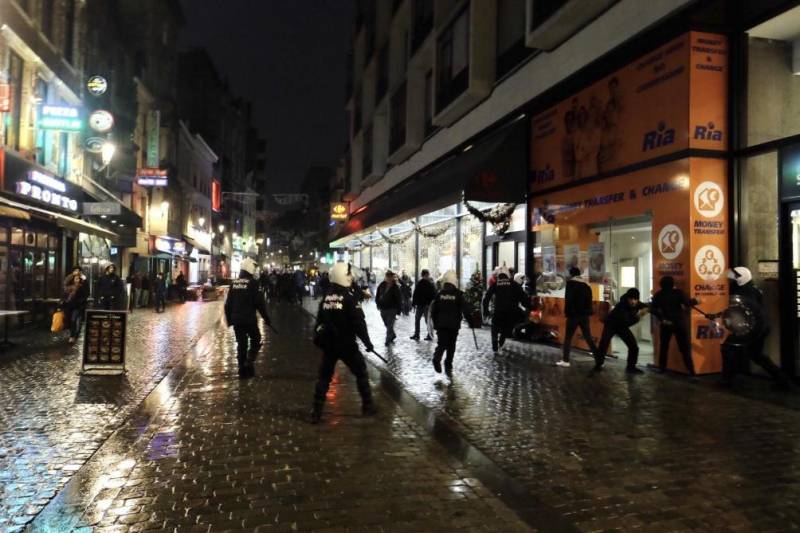 One of them was a young and talented citizen of France. As it is accepted to be politically correct, of Maghreb origin. His name is Wafa Hammich, but his fans are known by the nickname Vargasss 92. Leads a page in instagramme, where almost 600 thousands of people are signed to it. Very popular and, apparently, talented, he is the idol of the local (and not only local) youth, the rap performer, who, among other things, removes humorous sketches and puts them on the social network.

For evening 15 November This mega-star invited her fans to meet him "in real" in the center of Brussels on Monet Square. By the appointed time, hundreds of young people, mostly Muslims, began to flock to the opera house. The Vargasss 92 also came.

It is worth bearing in mind that the metropolitan police just finished sorting out football fans who staged a riot in the center of Brussels after the Moroccan team beat an opponent and qualified for the 2018 World Cup in Russia. Police all night 12 November reassured with batons and caught at least 300 Muslim youth hooligans. 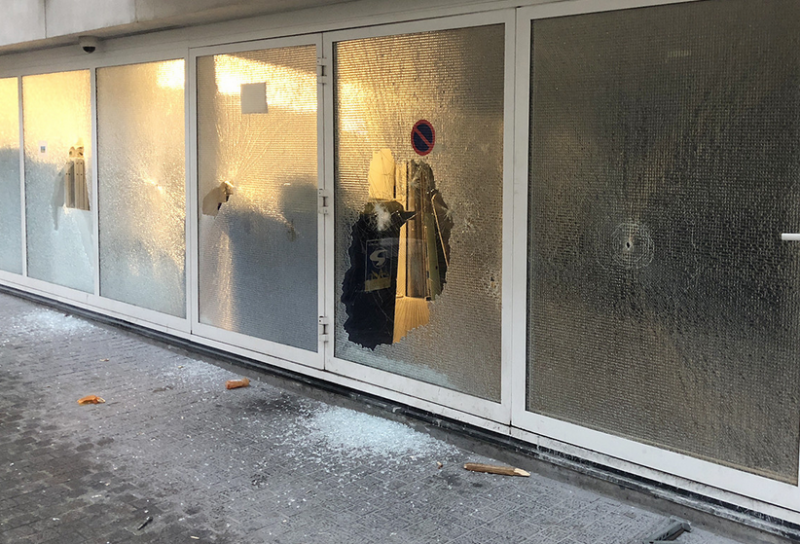 Therefore, even if one does not recall the terrorist attacks and other causes, of which there are many, it is quite normal that the police paid close attention to what was happening and began to find out the reasons for the unauthorized rally. Infinitely far from the deification of the Vargasss 92 and sincerely not understanding the reasons for the "gathering", the police tried to send the organizer of the illegal mass gathering of people to the police station "for clarification."

Further obvious. Clashes began with the police, the pogrom of the nearest shops and stores. In addition to a few police cars, private cars parked on the streets were damaged.

The provoked reinforcements easily dispersed the hooligan crowd of young people with great pleasure, without too much ado but without sending anyone to the hospitals. More than 30 people were detained, including the instigator himself. During the past 24 hours, all were released without charge. Only four minors remain in the precinct - waiting for parents.

In the city hall of Brussels reported that the action in the city center was unauthorized. Therefore, the authorities called on law enforcement to disperse the crowd. Belgian Interior Minister Jan Jambon condemned the clashes and said that the police are doing everything necessary to maintain order. "This violence is unacceptable and incomprehensible," - said the head of the Interior Ministry. At the same time, “forgetting” to clarify what exactly is “unacceptable and incomprehensible.”

In fact, everything is very understandable. The police showed extreme lack of professionalism. It was enough to call in reinforcements, provide a cordon and agree with the organizer to hold a meeting in 10-15 minutes. Then quietly go home. And the fans who were absolutely not sharpened to protest would safely listen to their idol.

Instead, the police tried to detain the organizer of a perfectly legitimate event. I can invite friends? Can. And if I have a lot of friends?

Remember, this is how in Russia, for many years, all kinds of opposition members have explained their meetings and rallies. And in this case it does not matter at all who and under what pretext gathered.

And then everything went as written. But why "how"? Precisely - according to a long time-written and many times proven scenario. The police detained and tried to take away the organizer - the crowd rushed to protect him. Cops used shields, batons and heavy equipment. The youth responded with bricks and pogroms. As a result, the police won. 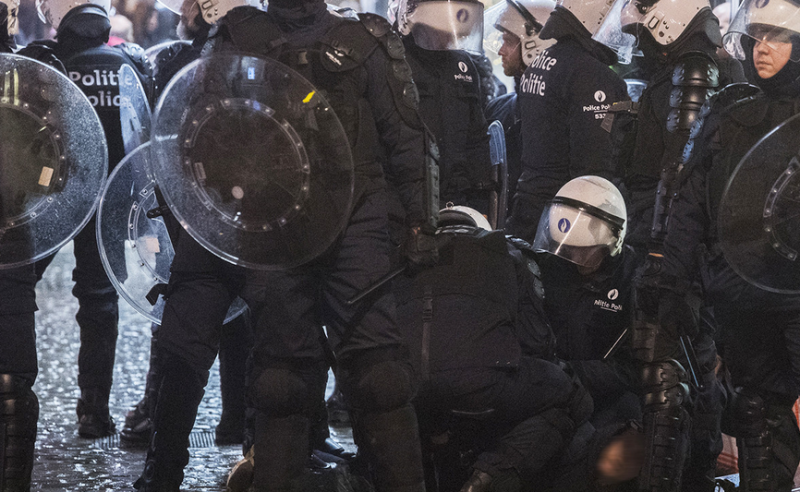 The author of these lines at least three times in the spring and summer of 2014, had to beat off his people in Kharkov in a similar way. The truth is more successful in view of the clear numerical advantage. As later observe and less successful stock. All of them occur equally in any city in Europe and the outcome depends only on the balance of power and the motivation of the parties.

In this case, the authorities were very lucky - neither the Vargasss 92 itself, nor its fans planned any clashes with the police and were initially very peaceful. Show the police a bit of common sense and no one would notice anything at all.
Now we have a classic model of organizing mass riots in the capital of the EU and NATO. With the use of social networks and tested completely innocent excuse. And with a direct analogy of the events on the Independence in Kiev exactly 4 a year ago.
Then everything also began with completely peaceful protests of students in the center of the capital, in which I also managed to participate as an observer. Albeit with political demands, but purely peaceful. And then, "by chance", the stronger and older guys joined these protesters. And "onizhedetey" just as in Brussels, with unjustified cruelty began to beat the police.

Then a wave of indignation followed, supported, by the way, in Brussels. "Onizhedetey" for a few weeks pushed out stronger and no longer children, first in the next square, and then they themselves went home. And the new protesters for a couple of months with the support of well-known individuals and countries "have ugandoshed" a huge country.

Is this not possible in Brussels? They spoke about Ukraine in the same way. And they put it at the beginning of Russia’s zero as an example - this is how everything is peacefully and well solved, no to you of Chechnya and terrorist acts.

What, all gently love Brussels or Berlin? There are no countries and forces interested in dispersing such Maidan with beating "onizhedetey" deploy in riots? 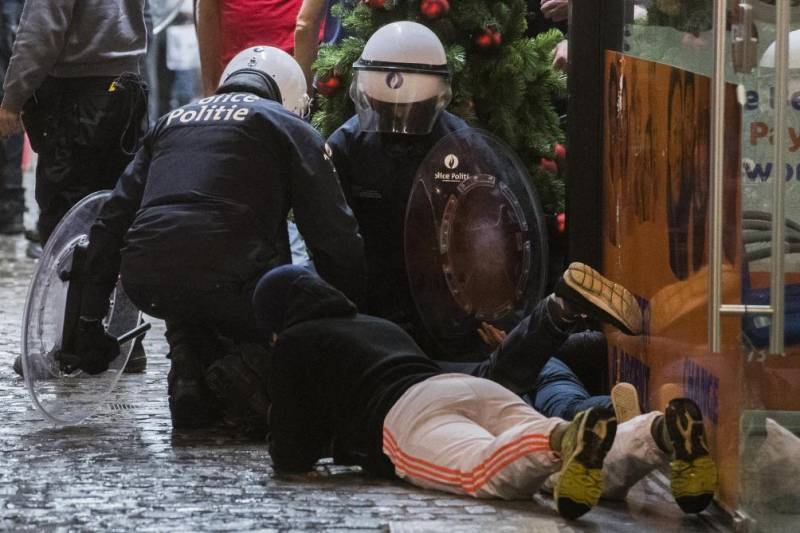 Do not tell me - the majority of the population of the Arab world, as well as the millions of migrants who came to the EU, do not even hide the fact that Europeans should pay and repent for the crimes they committed, for the overthrown leaders, for the destroyed states, for the bombings and the death of relatives.

And in this they are clearly or secretly supported by many Arab regimes. And not Arab too. What can I say - listen to the claims of Erdogan to Germany.

What happened in Brussels is certainly an accident. And the star instagram nobody indusk on such an experiment. But he took place and became known. Conclusions will be made, the lesson is learned by all who are interested in organizing European Maidan.
What is good for "interested" this example? That it is not necessary to wait for a case when someone somewhere will accidentally shoot a juvenile thief Muslim. Moreover, the police are instructed strictly on this score.

In this embodiment, nothing is expected. On the contrary, you can prepare everything yourself, choose the time and place. And then just initiate a mass gathering of people and the police response. And how to organize blood and sacrifices, Kiev 4 a year ago showed the whole world.

We will not guess how much time is left before such events in the EU, but for now it is obvious that Europe is absolutely not ready for them. And what will happen ...