November 16 2017
21
The Stratfor analytical center, which is also called the shadow CIA, somehow ceased to please us with its highly professional scenarios of possible hostilities in Ukraine, which have not yet taken place. Meanwhile, the topic needs to be continued, because everything is becoming hotter in Ukraine, and in many places at the same time. 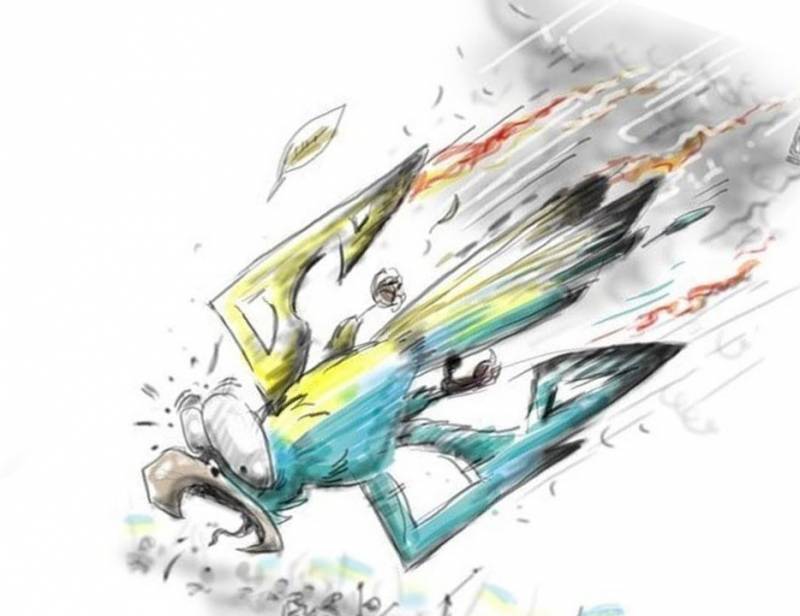 “Neo-Nazi punks”, in the words of Foreign Minister Sergey Lavrov, exterminates not only in the Donbas, but also in the mother of Russian cities, Kiev, right under the Verkhovna Rada, and this does not worry anyone officially, except for Sergey Lavrov. We will offer an informal scenario of the possible development of all these Bandera's Maidan, in order to compensate for the untimely loss of the Stratfor.

Filled with "neo-Nazi punks", the Bandera Ukraine, if desired, is rather simple to destabilize. The options are being considered: escalation of tensions in the Donbass or the third Saakashvili Maidan. Judging by the intensification of the shelling in the Donbas, the option of resuming the war in the Donbas, where the Nazi battalions are being deployed, has been chosen, away from the Maidan's sin. MikhoMaydan paused. In the Donbas they say that the new war has already begun, the Wehrmacht of the Armed Forces of Ukraine commemorated it for the 100 anniversary of the Russian revolution.

Perhaps this war should be the backdrop for the Volker-Surkov negotiations, a way to put pressure on Russia: to allow the Volker "peacekeepers" to occupy the Donbass in order to avoid the onset of the Armed Forces of Ukraine. These negotiations, obviously, will fail, and Volker will be able to say: I did everything to stop the war by "peacemakers", but I could not, Russia is to blame for this. Since Russia doesn’t care, according to Volker, to be guilty, it will find a way to deal once again with the APU, and Volker and the two floors of the CIA in the SBU probably understand this. What's next?

One way or another, tensions in Ukraine as a whole will increase, the “neo-Nazi punks” will raise their heads even higher, and, in such an environment, one more variant of the destabilization of Ukraine, about which the Bandera nations have long spoken, becomes possible.

The Nazis in the Rada have long demanded that all ties with Russia be severed. Everything! The most blatant such link is the supply of aggressive Russian gas through Ukraine to Europe, and the Nazis have long said that this should be stopped. Just blow up the GTS of Ukraine. In 2014, sabotage on gas pipelines was committed, but then the Kiev authorities managed to bring the situation under control. Today, strong Nazi bats can carry out their plans for a long time, especially if someone pushes them to this. By the way, the aggravation of Bandera’s relations with European nationalists and the end of the gas transit in the 2019 year, after which the GTS will turn into an unnecessary rusty pipe, is pushing this option.

However, the end of the GTS will also mean the beginning of the American Plan B for Ukraine “Broken Trident”. Many commentators believe that America will never allow destabilization of Bandera’s Ukraine, because it is their anti-Russian springboard. Why so? If America needs to break Russia's ties with Europe than weaken both, then Ukraine needs to be destabilized, for example, by destroying the CTA somehow. And then ... well, at least the grass does not grow, America is far away.

The law on “reintegration of Donbass” and “Russian aggression”, which has only one attainable goal - to bury the Minsk agreements, which are guarantors of Berlin, Paris and Moscow, is pushing towards such a development of events. Minsk separate peace between Europe and Russia will be finally broken.

Emergencies on the Ukrainian gas transport system will immediately lead to force majeure in Europe, in Turkey and in Russia. And in Ukraine - to a very large force majeure. Since the United States will remain without force majeure, Moscow can safely lay the blame on the United States and combat banderlog, which they have in “manual control”, according to Sergey Lavrov, despite the cries from the White House about the presumption of innocence and intrigue of Moscow.

After the cessation of gas transit, Moscow has nothing more to lose; its hands are completely untied. Moscow may declare the Bandera regime to have lost its legitimacy, and perhaps in this it will be joined by some European countries and Turkey. The next step, Moscow recognizes the DPR and the LPR, and will provide them with the necessary assistance in overcoming an emergency.

The termination of the supply of "European" gas to Ukraine will lead to chaos, and not the best way affect the APU in the Donbas. Military intervention from outside Ukraine becomes inevitable "to end a humanitarian catastrophe." For Russia, two converging blows from the Crimea and from the Belgorod-Kursk region, along the Dnieper, with access to Odessa and Kiev, suggest themselves. The APU in the Donbas fall into a huge cauldron, and surrender according to the Crimean scenario.

The sudden and sharp deterioration of its relations with Kiev by Warsaw suggests that it is preparing for Operation Broken Trident, that is, to destabilize Ukraine. This is the only serious argument for such a dramatic change by Warsaw of its Ukrainian policy. Therefore, Warsaw suddenly noticed the faces of Bandera and the banner of the OUN-UPA on the “revolution of hydration”: a weighty excuse was needed for the campaign of Warsaw to Kiev. The Polish army, and so by the way, the American units that arrived recently in Poland, in the active phase of the crisis, will advance to Galicia and the whole of Western Ukraine with access to Kiev.

It is clear why Polish Foreign Minister Witold Vashchikovsky does not cease to lament the lack of contacts with Moscow at the highest level. What are you going to talk about? About the dividing lines in Ukraine?

... The FIFA World Cup in Russia in 2018 may not take place, but for good reason. Although, judging by the intensity of the hybrid war in the sport, which covered the winter Olympics in South Korea with the anti-Russian offensive, it will not take place in Russia anyway.

Ctrl Enter
Noticed oshЫbku Highlight text and press. Ctrl + Enter
We are
Misha is “vanging” about the reasons for the further collapse of UkraineReports from the militia of New Russia for 27-28 September 2014 of the year
21 comment
Information
Dear reader, to leave comments on the publication, you must to register.