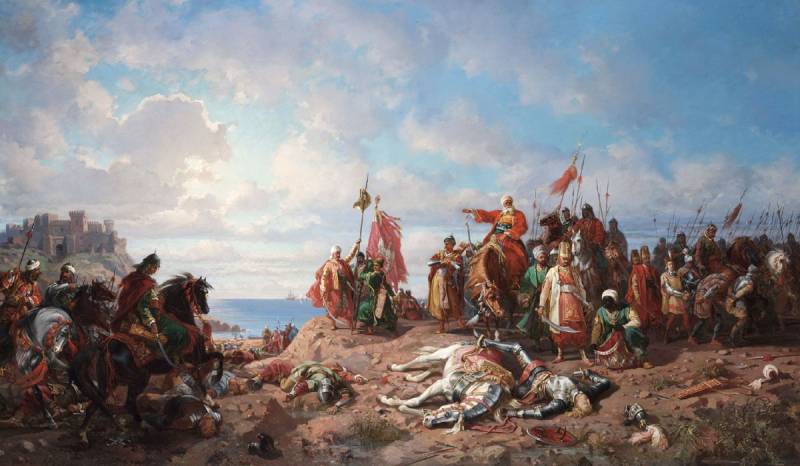 10 November 1444 was the last battle of the last crusade declared by Pope Eugenius-IV to stop the Turkish expansion, near the Bulgarian city of Varna. The warriors of many countries, mainly from Central and Eastern Europe, who felt the threat of the Ottoman Sultanate gaining strength in the Balkans, took part in it.

The knights of Poland, Hungary, Croatia, Bohemia, the Holy Roman Empire, the Papal State, the Republic of Venice and even the Teutonic Order went to battle with the "wicked Mohammedans", every now and then fighting against the Poles, but this time speaking with them in a united front. Moldovan, Wallachian and Bulgarian volunteers soon joined the army, which entered the land occupied by the Turks.

However, the event was supported not by all Christian countries. It was not attended by the hundred-year-old dismantling of England and France, absorbed by the reconquest of Spain, and also - the majority of small Italian and German states. And for a long time, Genoa, which had been at enmity with Venice, spat at all on Christian solidarity, sided with the Turks and left at its disposal its fleet. Due to this, Sultan Murad-II promptly transferred a large army from Anatolia in addition to the contingents already in Europe.

Serbian ruler Georgy Brankovich - a vassal of the Ottoman Sultanate also refused to fight. He was probably afraid that in the event of the defeat of the Crusaders, the Turks would again devastate Serbia in retaliation for apostasy. Even Byzantium, with which the Ottomans had long been threatened with extermination (and nine years later they realized this threat), did not dare to send soldiers to the aid of the “Christ army”. Perhaps there they also remembered the crusading of the crusaders of Constantinople in 1204, after which the Eastern Roman Empire fell for a long time under the rule of the Western invaders.

Nevertheless, under the command of the Polish King Vladislav-III, who headed the campaign, gathered according to various data, from 20 to 24 thousands of soldiers of different languages, including 15 thousands of Poles, Hungarians and Czechs. The number of Murad's army in various sources "walks" in a much wider range. Some write that it was about equal to the army of the Crusaders, others - that the Turks had accumulated 30 and even 60 thousands.

Whatever it was, and the battle ended in a disastrous defeat of European chivalry. The crusader army was almost completely destroyed, about 15 thousands of people died (the Turks finished off the wounded), about five thousand Ottomans were taken prisoner and sold into slavery. Only a few managed to escape to the swamps to the south of Varna and get out of these swamps alive. The losses of the Turks remained unknown, European historians speculatively estimate them in 10-15 thousands.

The young king Vladislav (during the battle he was only 20 years old), at the height of the battle, broke into the head of an elite squad of mounted cavalry soldiers at the headquarters of the sultan and wanted to fight him personally, but the old wise Murad chose to retire, and the royal squad surrounded the Janissaries and killed all. Vladislav was beheaded and solemnly handed over to the Sultan as the main trophy. Killed and commanded the papal army, Cardinal Giuliano Cesarini. According to one of the chronicles, he drowned in a swamp, trying to escape from the Turkish cavalry pursuing him.

On this minor note, the 350 era of the Crusades ended. When, in 1453, the next pope tried again to raise the knights to repel Constantinople, which had just been captured by the Turks, and once again make the Aya Sophia mosque a Christian church, no one responded to his call.

On the screen saver - Sultan Murad-II with a retinue near the body of the murdered King Wladyslaw, a picture of the 19th century Polish artist Stanislav Khlebovsky. The heroic reckless death of this young monarch is one of the common themes of Polish battle painting. Below is another painting by the famous painter Jan Mateiko, in which the king in a flowing ermine mantle and without a helmet (nonsense, of course, but beautifully) breaks through to the sultan. 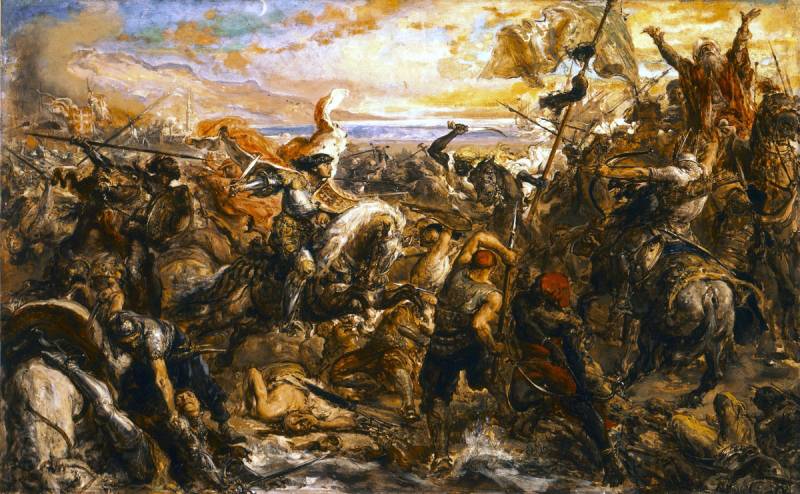 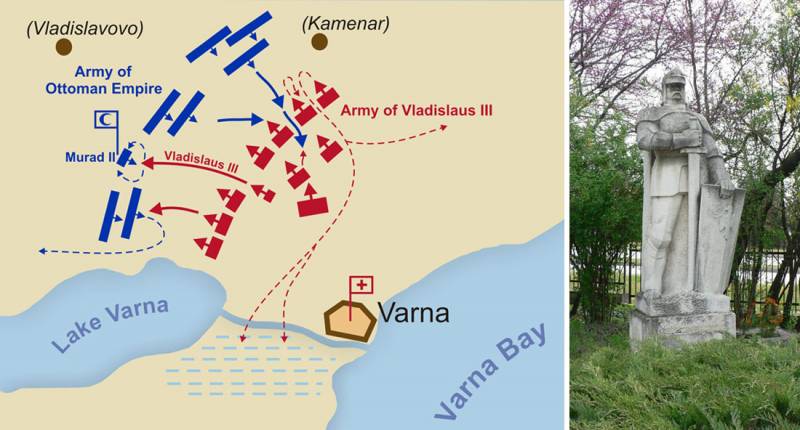 The map of the Battle of Varna and the monument to the crusaders, installed on the battlefield in the twentieth century. Now it is located within the city, which has greatly expanded over the past centuries. 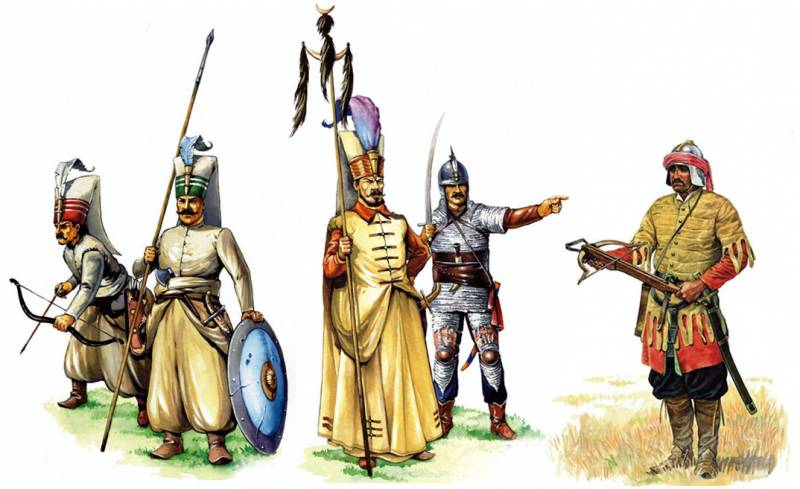 Janissaries of the first half of the 15th century (center with a commander and a bunchuk and his entourage) and a Turkish crossbowman of the same period.

Ctrl Enter
Noticed oshЫbku Highlight text and press. Ctrl + Enter
We are
Crusaders ReconquistaCrusader army of the north of Europe
56 comments
Information
Dear reader, to leave comments on the publication, you must to register.