Serbia must issue Ukraine a long and bloody bill

November 15 2017
9
Belgrade and Kiev had a big fight. Ambassadors of both countries were recalled to their homeland "for consultations." At the same time, the “Russian factor” seemed to have faded into the background, and the first came out of mutual claims: Ukraine talks about the participation of the Serbs in the war in Donbass, Serbia - about the war crimes of Ukrainians against the Serbs. But what kind of crimes are we talking about? 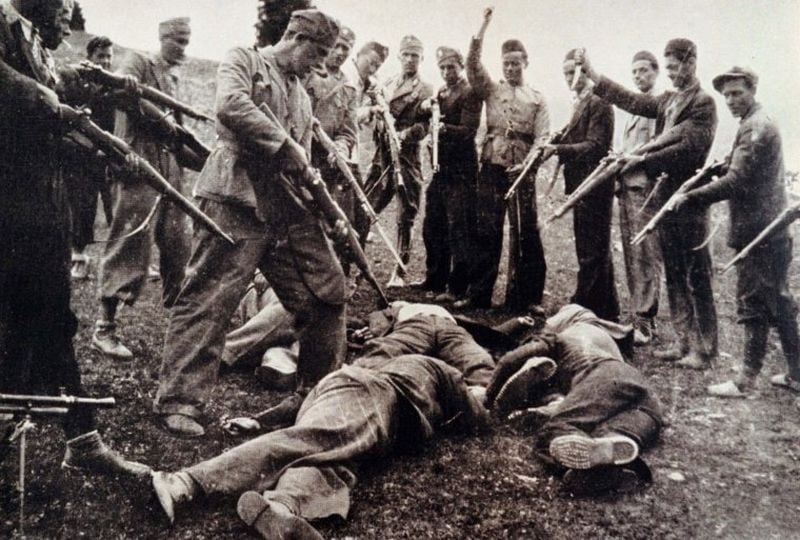 The current diplomatic scandal was unleashed by the efforts of the Ambassador of Ukraine in Belgrade Alexander Alexandrovich. He gave a series of interviews with the Balkan media (not only Serbian), where he was in every way rude to the host country. In particular, he questioned the capacity of the Serbian state, called it a “puppet in the hands of Moscow” that “destroys Europe”, “destabilizes Macedonia”, “creates tension in Croatia” and so on in the same vein.

The Ukrainian diplomatic corps has a peculiar understanding of its role in living nature. Any other embassy will not have such attacks in mind - this is contrary to diplomacy as a profession. Defending one’s own position is, of course, but it’s so stupid to put in, make one doubt not just his professionalism, but adequacy - this is a purely Ukrainian moment.

Of course, this could not get a diplomat with hands. “The happiness that the interview did not last longer, otherwise Serbia would have been accused of starting World War II with the assistance of Moscow,” Servian secretary of state Ivica Tonchev syronised. After that, he appealed to Aleksandrovich’s superiors with a request “to point out the inadmissibility of such behavior so that we would not be forced to take the traditional measures in these cases”. In fact, he threatened to declare the Ukrainian ambassador persona non grata.

Kiev decided to take the lead. The Ukrainian Foreign Minister recalled the ambassador under the pretext of consultations on "Serbian mercenaries" in the Donbass. The recall of the ambassador for consultations is a common type of diplomatic demarche. In fact, no consultation may not be, and the whole point - in an indicative expression of discontent. And now Kiev, covering up the strange actions of its ambassador, led the conflict towards the participation of Serbian volunteers in the war in Donbass on the side of the DPR and LPR. Ukraine has no similar claims, for example, to Spain and Italy (there were also such volunteers in the Donbass).

The Belgrade Ministry of Foreign Affairs, more than aspirations, fell into the Ukrainian looking-glass - and it is much deeper than the Balkans. Earlier, Serbia did not directly collide with the parallel world of Ukrainian diplomacy, therefore it decided to react mirror-like. That is, she also recalled the ambassador "for consultations" and recalled the participation of Ukrainians in the conflicts in the Balkans.

According to Serbian Foreign Minister Ivica Dacic, Belgrade "is aware of the participation of Ukrainian mercenaries in the crimes that the Croatian forces committed against the Serbian people in Croatia." And he stressed that "Ukraine, unlike Serbia, never condemned them."

“Serbia has taken a number of concrete steps to investigate the cases of Serbian citizens who are fighting in combat zones abroad, including Ukraine, which has shown a commitment to respect its international legal obligations,” he added. This is true: some Serbian volunteers who fought in the Donbass were under investigation in Serbia.

At the same time, Dacic did not clarify what kind of crimes in question. And in Kiev they never guessed that it was primarily about the events of the Second World War.

Worse than the germans

The Ukrainian Legion in Croatia was formed from the local community in the summer of 1941 in Zagreb at the initiative of the Orthodox priest Vasil Strilczyk. In the then clerical-fascist Croatia, the majority of such initiatives came precisely from priests - both Orthodox and Catholic. At the same time, Pop Strilchyk turned to German General Edmund Gleise von Horstenau with a request to send a legion to the Eastern Front, that is, to a war with Russia.

However, the Germans traditionally formed such units only for the occupation regime and did not send them to the active front. As a result, the Ukrainians were on the forefront of the fight against the Yugoslav (read Serbian) partisans, particularly in Kozar - the mountain range in the west of Bosnia and Herzegovina. Now it is part of the Republika Srpska, and in 1941, these lands were incorporated into the fascist independent Croatia - playing with words, the Serbs called it “unscrupulous,” nesavesna.

In the spring, the Kozary mountain range was controlled by partisan detachments of both the Titoists and the Chetnik nationalists, who beat the Germans fairly confidently. Then the German command organized a large-scale offensive operation to encircle and destroy Kozary partisans, together with the entire local Serb population. The main role in this offensive was played by the Ustashi Croats, to whom the Ukrainian Legion was assigned.

Very quickly, the military operation turned into a bloody massacre and genocide of the local population, in which the Croats and their allies particularly distinguished themselves. A couple of times the Germans were literally forced to stop the sadistic beating of peaceful village Serbs, but did not succeed in this and withdrew themselves, and the Hungarians and Italians eventually refused to cooperate with the Croats.

Some of the romantically-minded Italian units, under the impression of the atrocities of the Ustasha, even went over to the side of the Yugoslavs.

The death of more than 33 thousands of civilians has been documented, but in reality this figure reaches almost 70 thousands - just not all the documents have been collected. The survivors were sent either to Germany or to the Croatian concentration camp Jasenovac, so that the “lucky ones” got to Germany. Jasenovac rose at the same level as Majdanek, but historians note that the Croats excelled Germans in the degree of bullying and wild sadism, which is even disgusting to describe. “Kozar Massacre” is recognized as an act of genocide and for the Serbs it means approximately the same as Khatyn for Belarusians or Volyn for Poles.

The Ukrainian legion showed itself to the full. Not getting to the Eastern Front, the Ukrainians got bored and, colliding with Kozary, not even with Broz Tito’s units, but with the Chetniks, first began to rob and kill the civilian population, and then ticked off in a Cossack fashion, taking the loot.

For the year, the number of the Legion has decreased by almost ten times. The Germans and Croats patched him up, manned him and again threw into battle as early as 1943 against Noahu near Bihac in northern Bosnia. Quite quickly, he was defeated by the partisans and began to retreat, together with the German and Croatian units, towards Austria. On the Slovenian border, the soldiers caught up with the soldiers of Tito and, apparently, simply interrupted, because with such allies the Croats did not stand on ceremony (for example, they shot down units formed of Russian White Guard immigrants).

Here the trace of the Ukrainian Legion is lost. It is known that the engineer Vladimir Pankiv, who commanded them during the 1943 – 1945 period, committed suicide after the German surrender.

Kozars will not be so easily forgotten by the Serbs - they didn’t need to be “combed”. Yugoslavia was chasing war criminals around the world even more effectively than the Israelis: someone was blown up, someone was shot, someone was returned to the country and tried. Practically no one escaped this fate from the leadership of fascist Croatia.

The head of fascist Croatia, Ante Pavelic, who worked in Argentina as security adviser for Evita and Juan Peronov, was seriously injured in the assassination attempt in Buenos Aires and died a year later. And the last in this list was the “Ustashi Minister of Death” - Interior Minister Andriya Artukovich, whose extradition (a unique case) was achieved from America, although everyone covered him - from the Vatican to the US Supreme Court.

Simply put, the Ukrainians were substituted. For obvious reasons, Yugoslavia did not make any claims to the USSR (especially in the USSR, the role of the Ukrainian nationalists was not advertised even in Khatyn, so as not to comb the “friendship of nations”), and after 1991, they somehow did not reach. Other wars raged, but, again, with Ukrainian voluntary participation.

“Yes, is Ukraine Ukraine a land?”

It is necessary to understand that in the conflicts of Yugoslavs accompanying the collapse of Yugoslavia (including members of the UNA-UNSO *) were enough on both sides of the front. Those who came to the Croats were guided by simple motivation - “against the Serbs - means against the Muscovites”. On the Serbian side were those who proceeded from a religious position. To fight for the Catholics was unacceptable for them, if the word “morality” applies here.

Both those and others subsequently admitted that for the combat wing of the UNA-UNSO this was the so-called Vyshkil. That is, the Ukrainians were trained, got a real combat experience. In the trenches on the corn fields of Slavonia, it was more terrible than throwing cobblestones at Berkut in the streets of Kiev.

These people have long grown, matured, someone even managed to grow old. They could move from Chechnya to Croatia and back, if the motivation was “against the Muscovites”. For a similar reason, there are now enough Croats in the “ATO” zone - “against the Russians means against the Serbs”. Something like Eurovision, but with blood.

Moreover, in the last couple of years, it has become fashionable in Ukraine to discuss the Croatian operation “Oluya”, which destroyed the Serbian Krajina. Of course, in relation to the Donbass. Many are still looking for applied military science in a lightning throw on the rebel Serbian republic. We, they say, want it that way and we can do it too.

In these stories, military situations, political alignments there is a catastrophically little in common: Donbass is not Serbian Krajina (the opposite is true). But in the Ukrainian consciousness, they are almost identical. Consequently, it is necessary to “learn the Croatian experience” as opposed to relations with Serbia as the “puppet of Moscow”. In Serbia, in response, discussions began on the topic of “Yes, is Ukraine Ukraine a land?”, Despite its Slavonic and Orthodox Christianity. The answer may be unequivocal, based mainly on the experience of Kozary. In 1990-x, the presence of a certain number of Ukrainians on the Slavon front could simply be overlooked.

The Serbian Foreign Ministry, referring to the “Ukrainians who participated in the wars on the territory of Yugoslavia,” meant precisely the genocide in Kozar and the participation in it of the Ukrainian Legion of the Croatian fascist state. And Kiev is now in a very difficult situation, far more dangerous than lowering the level of diplomatic relations. Genocide is not for you to graze. He has no statute of limitations.

Ctrl Enter
Noticed oshЫbku Highlight text and press. Ctrl + Enter
We are
Slavenko Terzic: “There is no Europe without Russian civilization”Alphabet globalizers. Latin alphabet as an ideological weapon of the West
Military Reviewin Yandex News
Military Reviewin Google News
9 comments
Information
Dear reader, to leave comments on the publication, you must to register.