Is Khavija on the Euphrates - the last stronghold of the igilovtsy in Syria?

November 14 2017
19
After the liquidation of a large group of terrorists of the so-called “Islamic State” (*) in Abu Kemal, Syrian troops will have at least one more serious operation in the fight against ISIL (*) in Syria. We are talking about the need to defeat a terrorist group that turned the Havija Island, located on the Euphrates River near Deir ez-Zor, into a fortified area. 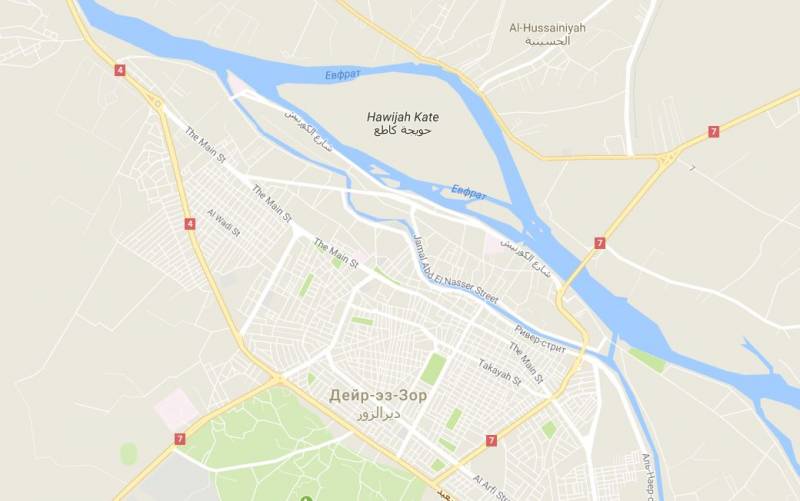 The militants moved to the island a few weeks ago, fleeing the Syrian army units operating in the province of Deir ez-Zor.

According to the Syrian journalist Riyadh Farid Hijab, the militants brought the members of their families - women and children - to the island. They are actually used as human shields.

Syrian military intelligence reports that a group of several hundred Igilovs is concentrated on the said island. The operation to neutralize the militants is carried out with great care - in order to prevent death among women and children.

Against this background today come from Syria news that the Iraqi army crossed the Euphrates, came close to the border of the SAR. Iraqi troops engaged in battle with ISIS terrorists (*) who crossed the Syrian-Iraqi border after being defeated by the CAA in the Syrian Abu Kemal area. Soldiers of the 7 and 8 Iraqi divisions take part in battles with the Igilovs. They are engaged in the release of several border settlements occupied by terrorists.

Ctrl Enter
Noticed oshЫbku Highlight text and press. Ctrl + Enter
We are
“Reserve trump card” of the USA against Moscow and Damascus enters the “Great Game”The Iranian rocket plant in Banias was too tough for the Israeli Air Force. What does Tel Aviv fear? Details of the fight for Deir-ez-Zor
Military Reviewin Yandex News
Military Reviewin Google News
19 comments
Information
Dear reader, to leave comments on the publication, you must to register.